All Over For Prince Andrew

Queen Elizabeth has sacked her favourite son after his disastrous interview about his links to a paedophile, leaving the monarchy facing its biggest threat in decades

Jane Vorster
THE year was 1992. The occasion: a speech by Queen Elizabeth to mark the 40th anniversary of her ascension to the throne. The tone: anything but celebratory.

It had been one of the worst years of her life, she told the nation – her annus horribilis, she called it.

And it wasn’t hard to see why. The marriages of three of her four children had broken down – Prince Charles’ to Princess Diana, Prince Andrew’s to Sarah, Duchess of York (Fergie), and Princess

Anne’s to Captain Mark Phillips. A devastating fire had ripped through her beloved Windsor Castle. A tell-all book by Andrew Morton, Diana: Her True Story, revealed bombshell details of Charles’ affair with Camilla Parker Bowles – and then pictures emerged of Fergie sunbathing topless and having her toes sucked by millionaire John Bryan.

“[It] is not a year on which I shall look back with undiluted pleasure,” the queen said with characteristic restraint.

But it’s safe to say 2019 is a strong contender to knock that horrible year into second place.

It started with a literal bang when her husband, Prince Philip, crashed into a car carrying two women and a baby in January – and it snowballed from there.

Yet all these headaches pale into insignificance compared with the monumental migraine her favourite son has caused her.

And it must’ve been with a heavy heart that the queen summoned her precious Andrew (59) to Buckingham Palace to tell him he was sacked from royal duty.

She had little choice: Andrew’s car crash of a TV interview, which was supposed to draw a line under his involvement with paedophile Jeffrey Epstein, had cast the royal family into such disrepute he had to go.

The interview with hard-hitting BBC journalist Emily Maitlis, littered with laughable excuses and paper-thin denials, has shaken The Firm to its foundations.

“Quite frankly, it’s difficult to recall any thing more scandalous in the history of the royal family in a generation,” royal commentator AN Wilson wrote in the Daily Mail.

The only thing that comes close, says social historian Professor Judith Rowbotham, is the scandal that rocked the monarchy in 1936 when King Edward VIII abdicated in order to marry Wallis Simpson, a divorced American socialite.

Now, just like his great-uncle, Andrew will discover what it’s like to be out in the cold.

The prince said in a statement he’d be withdrawing from royal duty for the foreseeable future – but insiders say there can be no going back. 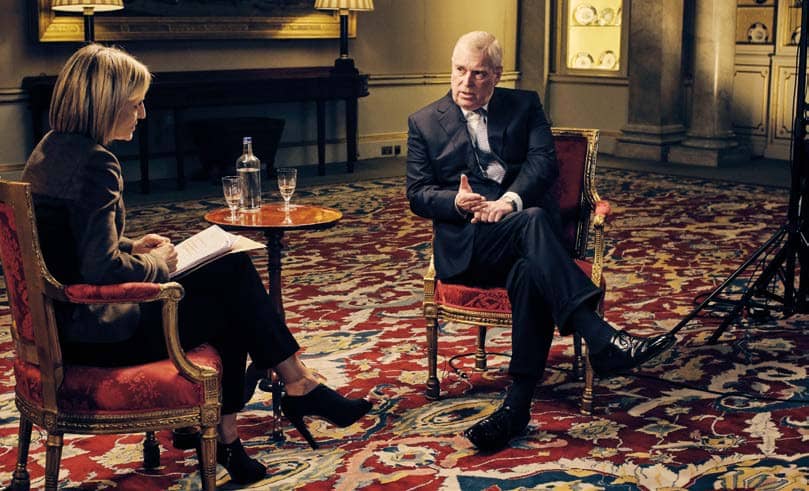 FROM HERO TO ZERO