When I Left “Karl Liebknecht” (an excerpt) 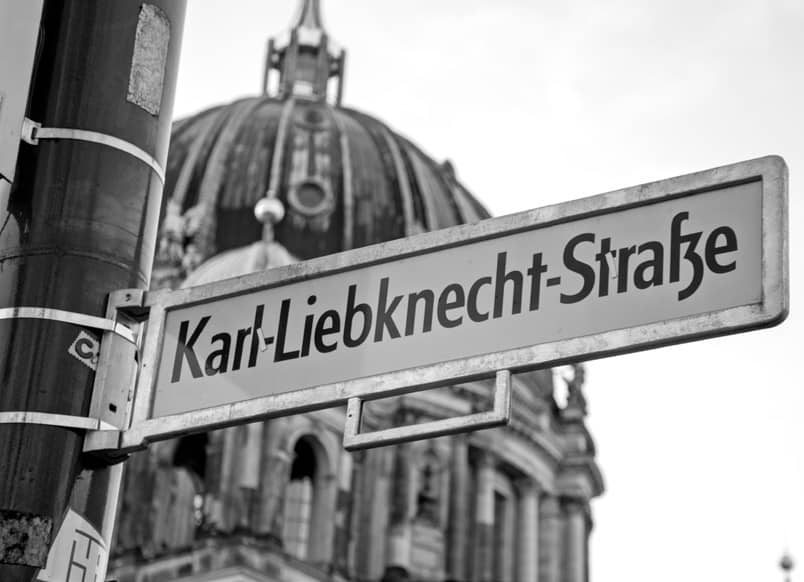 In the Karl Liebknecht House in Leipzig, Germany, thirty people of various nationalities are seated around an improvised table on the stage in the Events Hall, interpreters behind them, some with texts in front of them, some without, and while it looks as if they’re at an ordinary meeting, they are, in fact, at an exceptional one, one that could be called a performance.

Lidija Dimkovska
They are taking part in a pilot project organized by the Society of Admirers of Karl Liebknecht of Leipzig, which, on January 19, 2018, in recognition of the ninety-ninth anniversary of the death of Karl Liebknecht—the great German leftist and colleague of Rosa Luxemburg—had invited them, all migrants who, prior to their emigration, had lived at an address either bearing his name or having some other connection with him. Some had changed addresses temporarily, others had moved away forever, some wanted to leave, some never completely left, and yet others were connected in some particular way with places named “Karl Liebknecht.” The call was announced publicly, and it generated a great deal of interest, but in the end, thirty people were selected. The hall is completely packed—residents of Leipzig, most others somehow connected with Karl Liebknecht, of whom a majority were also members of the Society of Admirers of Karl Liebknecht—all showing great interest in the event.

After a short speech by a representative of the Society of Admirers of Karl Liebknecht, people were given the opportunity either to speak freely or to read from a prepared text, each in his or her own way, in whatever manner they wished and considered appropriate, about how their Karl Liebknecht address had left its mark on them, both while they were living there and afterward.

My name is Jakob, I am here on behalf of my brother, Michael, who lives in Rwanda and who, because of the distance, could not be here. Still, because this meeting was so important, he sent me, even though I haven’t moved away from Karl Liebknecht Street in Cottbus and still live there with my family and my mother. Michael might even have come if he could, but I think he would have found it unpleasant telling the story of how he left Karl Liebknecht. It’s rather unpleasant for me too, but it would’ve been even more so had I written it down because then there would have been a written account, something I don’t want at all for our family. I hope you’ll understand.

Here’s what happened: Michael is three years younger than me, we are Lusatian Sorbs, our family is from Cottbus, where our ancestors have lived since the tenth century. I personally think we have no connection with Serbia because we don’t know Serbian, we speak German and the Lower Sorbian language, and we’re Protestants. But there are those who think we are brothers with the Serbs from Serbia, including, unfortunately, my brother. I say unfortunately because Michael had been a normal young man, among the first generation of students at the Technical University in Cottbus, where he got all A’s, but suddenly, when he was nineteen, he began to act really strangely. First, he began taking books about the South Slavs from the library, and he’d stay up reading till late at night, even though before then he never read anything except his schoolbooks. At home, we didn’t have any books except my mother’s cookbooks. Our father was an auto mechanic, and when I finished high school, I joined him and we soon turned our whole yard into a car repair business. Michael was also interested in technical things, but not the repair business, and he said that when he finished university, he’d like to work for some firm connected with his studies, not our car repair business. My father agreed, telling me privately, “Three people from the same household is too many for one repair shop,” not referring to the volume of work but the possibility for there to be conflict when three people work together all day in the shop.

Then Michael began to ignore his exams and to read all those books, in which he sought out everything he could find about the Serbs in Serbia. At that time there would be occasional news reports on television giving information on everything happening in Yugoslavia, about the war that had broken out there and the most significant things happening there at that time. Michael soon became obsessed with the Serbs and Serbia, and he’d curse loudly at Bosnia, Muslims, Croats, Slovenes, and everything that wasn’t Serbian or pro-Serbian in the country falling apart about two thousand kilometers from where we were. At first, we wondered at his troubling himself with something so far from us and that had nothing to do with us. Then, one evening, when it was broadcast on television that a grenade had exploded in the market in Sarajevo, killing approximately fifty people and wounding about twenty more, Michael immediately shouted out, “Yes!” and turned to us: “From now on, call me Mihailo. I am no longer Michael!” “Maybe someone else will, but I won’t,” my father retorted, while my heart pounded like crazy and my mother went into her bedroom and sobbed uncontrollably all evening.

I think we were all shocked by Michael’s reaction when he saw all those mangled bodies in the marketplace in Sarajevo, which was, at the time, the city mentioned most in the news not only in Europe but around the world. The next day none of us paid any attention to Michael, nor in the days that followed. He seemed a bit ashamed, and he didn’t eat with us. He left early for the library and returned before bedtime, and in the room we shared, he turned to the wall, which signaled to me that he didn’t want to talk. Several days later he showed up at breakfast and announced he was leaving. “Where, Michael?” my mother asked gently, mothers being always prepared to forgive and forget. “To Bosnia,” he said. “The Serbs need me.” “Go, but don’t come back. We don’t need anyone like that,” our father said, while my heart beat wildly and my mother turned as white as a sheet and began to sob loudly.