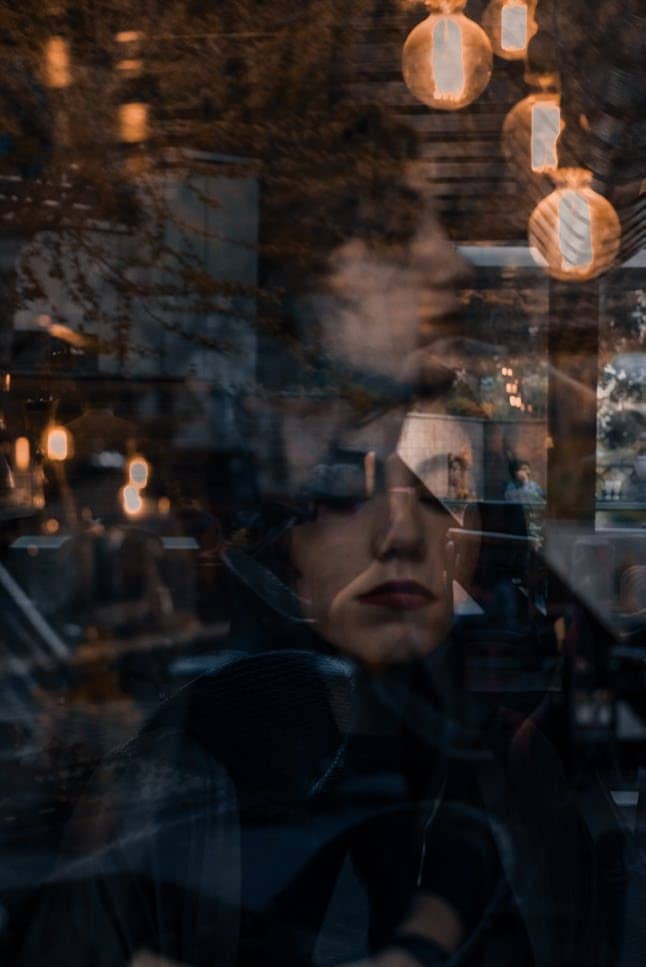 A stalled train and shifting visage make for an eerie commute.

I could’ve stayed in bed a little longer, but what for? Surely that would only make things worse. Lately I’d been swamped with work, I’d slept very little, and I’d had anxiety-ridden dreams that, upon waking, I almost never remembered. I dragged my feet to the bathroom, turned on the light, and twisted the shower knob. It wasn’t until I was under the falling water that I opened my eyes fully. Then I dried myself off and got dressed, in the clothes I’d left on top of the toilet seat the night before. I brushed my hair in front of the mirror, paying little attention to my weary eyes and irritated expression. Then, all at once, I focused on my reflection: there’s no doubt that one changes with the years, with the passage of time, adversities, the care one does or doesn’t offer to one’s face, stress, worries. I’d already noticed the appearance of a modest second chin and the bags that grew beneath my eyes. But what I saw in the mirror was none of that. It simply wasn’t my face. It didn’t seem younger or older—it just wasn’t mine. She looked a bit like me, the same bags under the eyes, the same shape of the brows, the same thin and tense lips; but the nose was longer and more narrow, the eyes farther apart, the chin rounder and too small for my face. I continued brushing, concentrating on my hair to not pay so much attention to that face. I thought that I must be very tired and that my mind was playing a bad trick on me. I pulled my hair into a ponytail and put a bit of mascara on the eyelashes. I brushed my teeth, grabbed my bag and keys, and made my way to the office.

I had so much to do that I always left work exhausted and never felt the desire to do absolutely anything afterward. I would throw myself across my bed to read for a bit or watch television. Invariably I would fall asleep there until my hunger woke me, and I’d prepare myself something quick and cold. Immediately after I would fall back asleep. Supposedly, this intense pressure at work was something transitory, but my coworkers and I started to suspect that it would be like that forever. They’d fired two of our coworkers and split all their projects among the rest of us, promising that soon reinforcements would arrive, but it didn’t happen.

On the way to the Metro I thought about the work awaiting me and what I would take on first. The sound of my shoes, with their worn-down heels, interrupted my thoughts.

I’d planned to take them to a cobbler the past weekend, but I’d forgotten, and now the sound they made as they slapped on the floor was irritating. The Metro platform was packed. I headed to the women-only section, noticing the smell of perfume, lotions, and deodorant. The majority were dressed in office wear: blazers, cashmere pants, silk blouses, heels. The common denominator was desperation. Some cursed through their teeth, and others gazed down the tunnel with resigned expectation. It wasn’t normal to see such a pileup of people waiting on the platform at this time or for the trains to be so delayed.