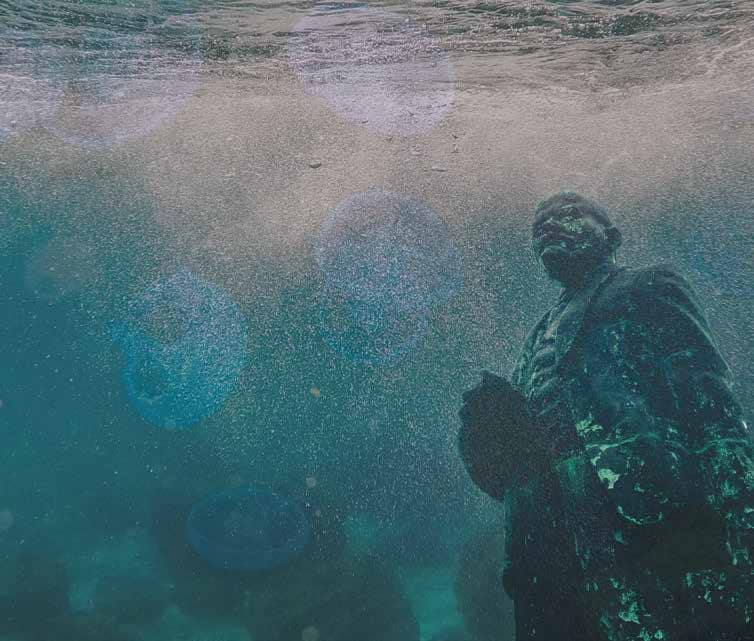 Scuba-diving in the Black Sea, a writer contemplates Lenin in the Crimean seabed, the watery landfall from which historical figures are never meant to rise again.

In 2015 Lenin statues were coming down at such a clip in Ukraine that a website actually tracked the phenomenon somewhat like the morel map in the US tracked the fruiting of mushrooms each year, from south to north.

Raining Lenins posted interactive charts and a searchable database. Interested parties could see when statues had come down and where. Archived videos allowed for binge-watching the most dramatic topplings. One selection, captioned “Eclectic Crowd,” showed a group of people in sock hats, puffer coats, and hooded parkas looping a chain around Lenin’s outstretched arm and pulling him down, their gloved hands gripping the metal links of the chain and yanking, as if in a tug-of-war with history.

Lenin’s outstretched arm all by itself was as recognizable as a full-body Lenin. An image of him gesturing furiously from atop the train at the Finland Station in Petrograd was iconic. Holding that arm high, he harangued the crowd, whipping the proletariat into a frenzy. Orators of the day cultivated stagy, overblown body language when addressing the masses, and Vladimir Ilyich had perfected the milieu. If ever you saw a photo of a Ukrainian landfill from 2015 that focused in on one single outstretched arm in bronze jutting up from the shredded plastic and junk, you knew it was attached to a Lenin down below.

By autumn of 2015, Lenin was mainly down below, mainly brought low by wave after wave of eclectic Ukrainian crowds. The country jettisoned five hundred statues over a six-month period.

This wasn’t the first Leninfall. Ukraine deLeninized after leaving the Soviet Union, circa 1991. Statues that had long dominated city squares throughout the country ended up recycled as scrap. A select few wound up swimming with the fishies off Cape Tarkenhut, a favorite dive spot on the Crimean peninsula. At a depth of thirteen meters, they were on display in an underwater kingdom called Soviet Atlantis. Other Communist-era relics had experienced a similar burial at sea there, too. Whether out of irony or artistry, divers had brought the castoffs and decommissions here over the past twenty-eight years and fashioned a final resting place for them in the Black Sea’s crystal waters.

Standing on the deck of the Night Pearl ( ), a seventy-five-foot liveaboard out of Sevastopol, I fiddled with my regulator, angling for a tight enough seal between its silicon mouthpiece and the flexible hose of the nitrox tank on my back. Buckles, straps, and valves weren’t things I wanted to mess with in the midst of a panic attack at thirteen meters. Not that I was on the verge of panicking, but novice divers had to overcome plenty of fears, not the least of which concerned breathing underwater. Gaining expertise with the gear, mastering the gear, training with the gear, was a hedge against those fears. I patted the pockets of my buoyancy compensator vest, feeling for the lead weights.

“Consider a balance between what is ditchable and what is nonditchable,” our instructor, Kirill, had said yesterday when we went through our drills. “Ditch enough weight,” he told us, “to guarantee positive buoyancy in the depths.”

Positive buoyancy, I thought now, in the depths. I watched the skipper maneuver the Night Pearl toward a dive buoy that marked Soviet Atlantis. The shifting surface waters shimmered around the buoy, and I studied the veils of sunlight looping within the glassine sea. We were more or less directly above that archive of surplus Lenins right now. Positive buoyancy was precisely what they no longer possessed. A distinction between what was ditchable and what was nonditchable had settled itself emphatically down in the sediment of the Crimean seabed years before. The Crimean seabed had become a safekeeping place for things never meant to rise again.

The thrum of the engines resonated up through my flippered feet. I glanced back toward shore. We were about a hundred meters out. The knobby edge of the peninsula was a mix of sandstone nodules and pale shales. Marly slabs alternated with striations of tuff, a dark, porous limestone. This gave the coast a vertical and stacked look, like a well-layered dessert torte rising high above the sea.

I had gained my PADI Open Water certification on our jaunt from Sevastopol, completing hands-on tests with equipment alongside other students. As our boat trekked northward the day before, the crew docked at decent intervals in coastal coves and grottos where we could train. My fellow students and I had logged an hour of practice in the Cup of Love, a stone pool surrounded by craggy lava-rock walls. The crater of an extinct Cretaceous-era volcano formed the cup of the Cup of Love, and the Black Sea kept it brimming via tunnels and inlets. A favorite site for freestyle cliff divers, the pool mirrored exactly the emerald-teal waters offshore and boasted a liquid transparency. Its wave-free stillness was optimal for cycling through low-stakes submersion drills. Our low-stakes drills yesterday involved learning to mouth-breathe with a regulator.