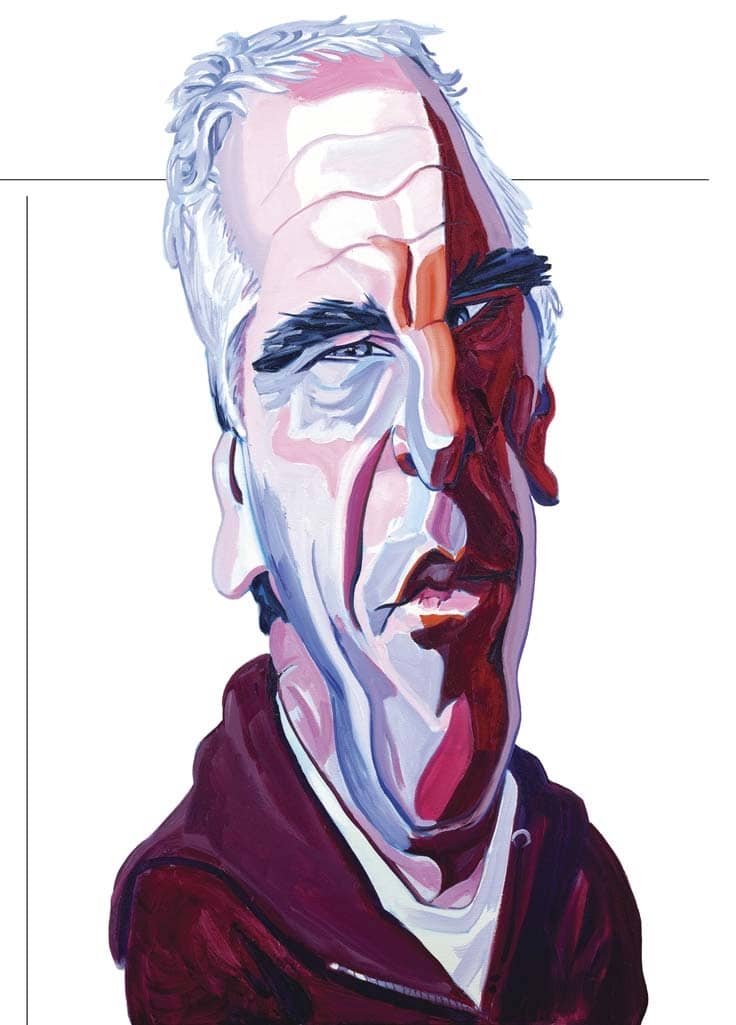 Dating the Monster In rarefied New York circles, Jeffrey Epstein was the sociopath who proved the rule

Many moons ago, in the early 2000s, my friends spent a weekend in Southampton with a distinctive young blond who resembled Lady Gaga if Gaga were British. She was about 22 and said she was an interior designer, or a jewelry designer, or a motivational coach—I can’t remember which, but in any case the job sounded semi fake— and she lived in an apartment on the Upper East Side that her older boyfriend had given her, at least often attended auctions. He loved vegetarian food and playing unfamiliar concertos on his grand piano. As she strolled down Southampton’s tree-lined streets, she was struck by their beauty and said she’d have to discuss getting a home there with her boyfriend. His name was Jeffrey Epstein.

Back then, as a cocky, petite, ink-stained wretch, I wasn’t one of the young women in Manhattan whom Epstein and his friends approached for relationships, one-night stands, or abuse. But I was surrounded by a lot of them. They were always the most beautiful girls in the room, usually models or former models, with a slightly aloof Stepford Wives aura that masked a deeper vulnerability. Several names came up when they were around: Epstein, supermarket magnate Ron Burkle, film financier Steve Bing, and former president Bill Clinton, then in the prime of his postpresidential career and flying around on Epstein’s jet, dubbed the Lolita Express, or Burkle’s jet, dubbed Air Fuck One. (Clinton has not been accused of wrongdoing.) The women were often blond— Epstein, in particular, liked patrician blonds with a bit of a baby face. At his home on the Upper East Side, he kept a photo of ’80s soap star Morgan Fairchild, whom he called his ideal woman, though considering they were both in their early 50s back then, she was far too old for him.

Beyond allegedly running a pedophile ring, Epstein, who hanged himself in August, epitomized the transactional nature of fin de siècle New York society, the sociopath who proved the rule. As hedge funds began to create massive fortunes and the billionaire class outpaced entail and primogeniture, women like the one in Southampton were necessary accessories, and learning how to acquire them was part of many a high-level trader’s skill set. There’s a temptation to say that the world has always worked this way—ambitious, beautiful young women have often sought to climb rungs via powerful men, and powerful men have partly craved power in order to access beautiful women—but this era in New York was unique. A rapidly increasing workforce of women in black slip dresses, knee-high black boots, and flatironed hair had come to seek the Sex and the City lifestyle, not husbands—but with most of their professions (fashion, publicity, publishing) paying far less than men’s, they were not averse to someone footing the bill.

Beautiful women also had currency in the city’s “models and bottles” scene, as the post–9/11 era of downtown nightlife was called. Manhattan’s legendary club scene of hip-hop stars, painters, and graffiti artists, where one gained entrée by virtue of one’s art rather than the size of one’s wallet, was going capitalist. A new nightclub formula had been devised: Ice buckets of Cristal and Cîroc bottles were set up at leather banquettes, alongside every kind of model— Victoria’s Secret model, runway model, supermodel, “just-off-the-boat model”—and if you were a rich older guy who wanted to take a seat, it could cost up to $10,000, though Puffy and Leo didn’t pay a thing.