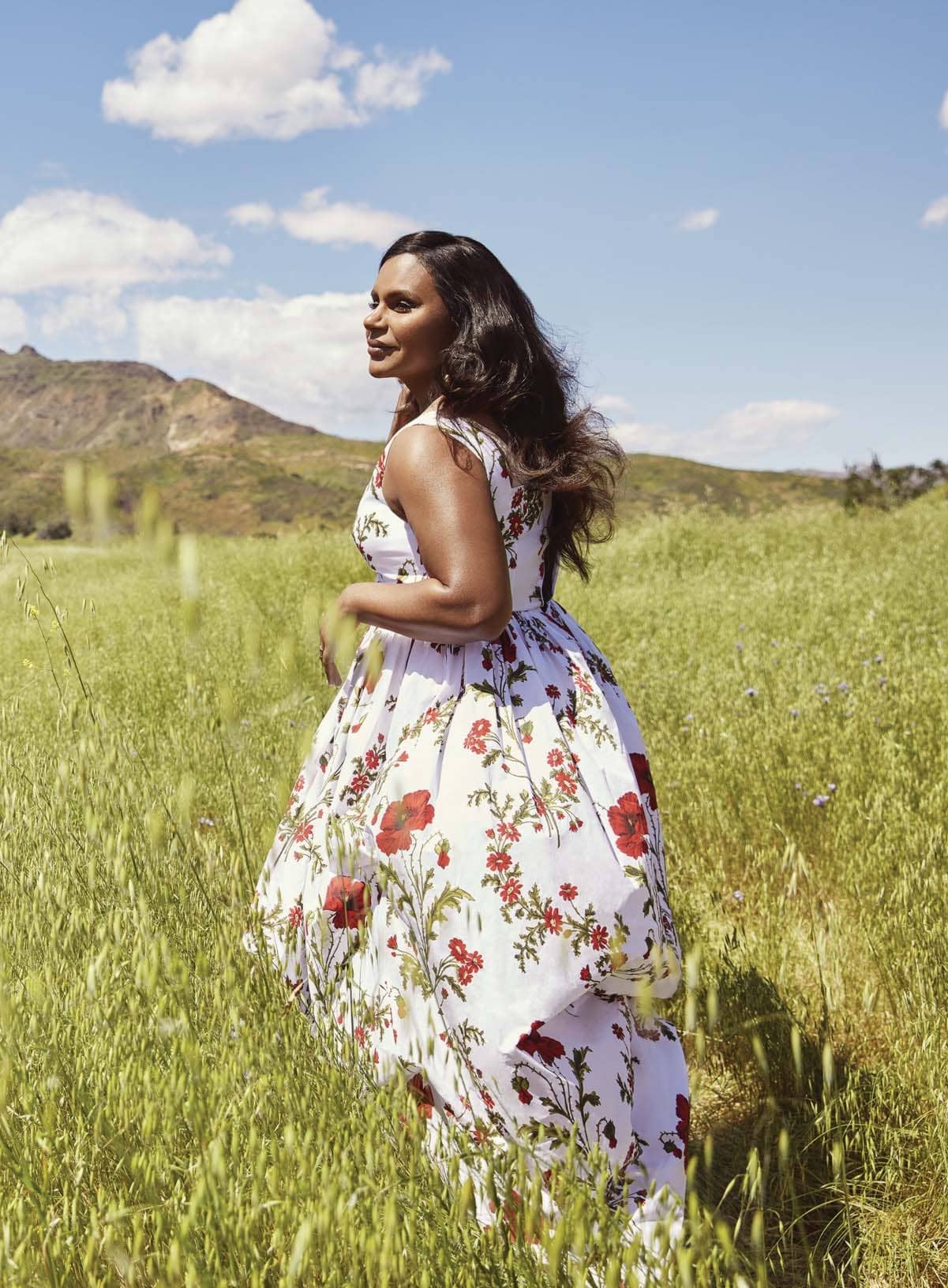 WITH HER SUNDANCE HIT Late Night IN THEATERS AND A Four Weddings and a Funeral REMIX COMING TO HULU, THE ACTOR AND CREATOR HITS A WHOLE NEW LEVEL

Samhita Mukhopadhyay
“I’m not exactly the barefoot-in-the-forest, earth-mother type,” Mindy Kaling says as she looks around. We’re on the edge of Paramount Ranch, a wilderness center originally built by the studio in 1927 to house movie sets—you’ve seen them on Dr. Quinn, Medicine Woman, American Sniper, Westworld. Parts of the ranch burned down in last year’s Woolsey fire, but here, in April, the wildflowers are popping in abundance.

And maybe Kaling isn’t Gaea but she is, without a doubt, a creator. From her years writing and starring in The Office, to The Mindy Project, to Champions, to an upcoming film with Emma Thompson called Late Night, and a romantic comedy with Priyanka Chopra, to two New York Times–best-selling books and two new TV shows in production (one on Hulu and one on Netflix)—Kaling has constantly been developing new work. (She is also an actual mother, to Katherine, her oneand-a-half-year-old daughter.) What’s more, the show-runner, writer, and actor has managed to do more than just survive in the entertainment business—she has thrived, and in one of its most fickle and competitive corners: comedy.

Kaling approaches life with a type of deadpan sarcasm that makes you feel both on edge and a little giggly. I see it when she feigns disappointment with her breakfast but really just wants some hot sauce. You can also see echoes of it in the characters she plays and writes—whip-smart, brash, polished, pop-culture-obsessed, boy-crazy, delightfully corny women. Part of their agency is in their charisma. Making jokes, says Kaling, is how she has made sense of the world around her.

The business of comedy is the foundation for Kaling’s Sundance darling, Late Night, which premiered to festival acclaim and garnered a $13 million deal; it opens in theaters this June. The film centers around a late-night talk show host, Katherine Newbury (played by Emma Thompson). Newbury is fighting to keep her show relevant when she realizes she has no women in her writers’ room and asks her producer, Brad (Denis O’Hare), to hire one immediately.

“The script was witty, politically savvy without being pious, sharp as a tack and a lot about me,” says Thompson, who took the role without hesitation and who loved working with Kaling. “She’s cool, calm, and deeply professional, and one of the hardest-working people I know. She also makes me laugh on at least an hourly basis, which is rare because the frightful state of the world today has had a baleful effect upon my sense of humor.”

Kaling stars with Thompson as an aspiring comedy writer, Molly Patel, who lands the “Late Night” writing gig. Molly walks into an all-white-male writers’ room, cheerily offering up a stack of cupcakes.

The film takes the idea of the minority hire to its most absurd incarnation, but Kaling lands it because the writing is so witty. Her career has been defined by this ability to tackle age-old tropes in unconventional ways.

Kaling herself is no stranger to being the only woman in a writers’ room—at 24, she was the only woman among eight writers for The Office, and the only woman of color for the entire run of the show. As Kaling staffed up her two most recent projects, who and how she hired was top of mind.