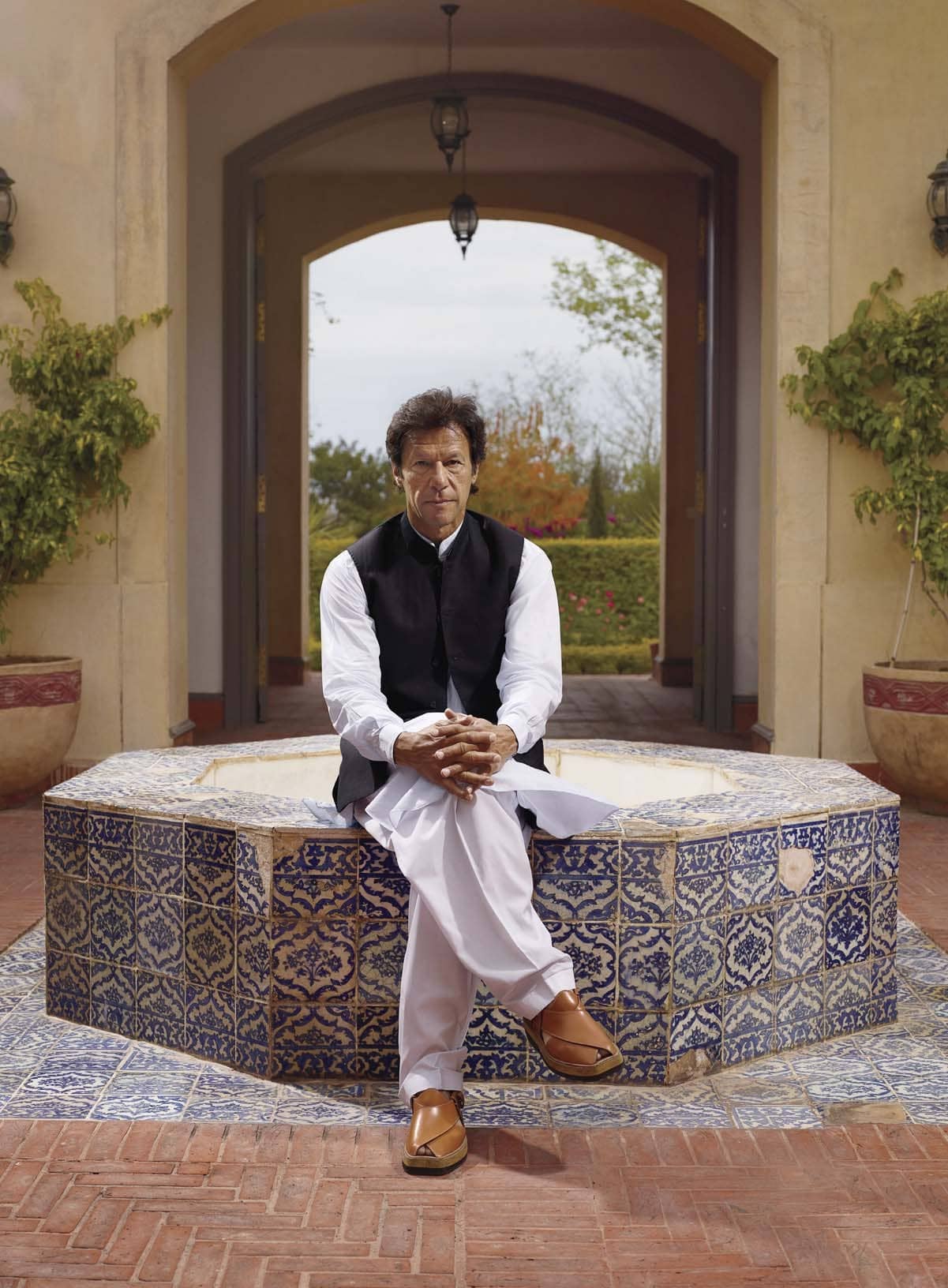 After a hard-partying life as a cricket star and sex symbol, Imran Khan has transformed himself from revered sportsman into international statesman. AATISH TASEER, who has known Khan since his days as a tabloid fixture, explores how an Oxford-educated playboy became the prime minister of Pakistan--and an outspoken critic of Western decadence

One night the future first lady of Pakistan had a dream. Visions and prophecies were Bushra Maneka’s stock and trade, for she was a female pir, or living saint. Known as Pinky Peerni to her admirers, Maneka’s gift of clairvoyance had earned her a following well beyond her hometown of Pakpattan, a celebrated spiritual center 115 miles southwest of Lahore. In 2015, Maneka had added to her growing list of clients the man who was the object of her prophetic dream: Imran Khan, the legendary cricketer and most famous Pakistani alive. “Spiritual guides, or pirs,” Khan writes in his autobiography, “are quite common in Pakistan. Millions of people, particularly in rural areas of the country, follow them, consulting them on everything from religious matters to sickness and family problems.”

Khan was, if not a living saint, then certainly a living god. From the late 1970s, when my mother, a reporter in India, first interviewed him, to well into the 1990s, when he led the Pakistan team to a World Cup victory against England, he towered over the landscape of practically all those nations where the Union Jack had ever flown. Born in 1952 to an upper-middle-class family in Lahore, he had come of age at a time when cricket, the “gentleman’s game” so intimately associated with the spread of the British Empire, was turning into a blood sport, imbued with the tensions of a newly awakened postcolonial world. “For teams like Pakistan, India, and the West Indies,” Khan writes in his autobiography, “a battle to right colonial wrongs and assert our equality was played out on the cricket field every time we took on England.” 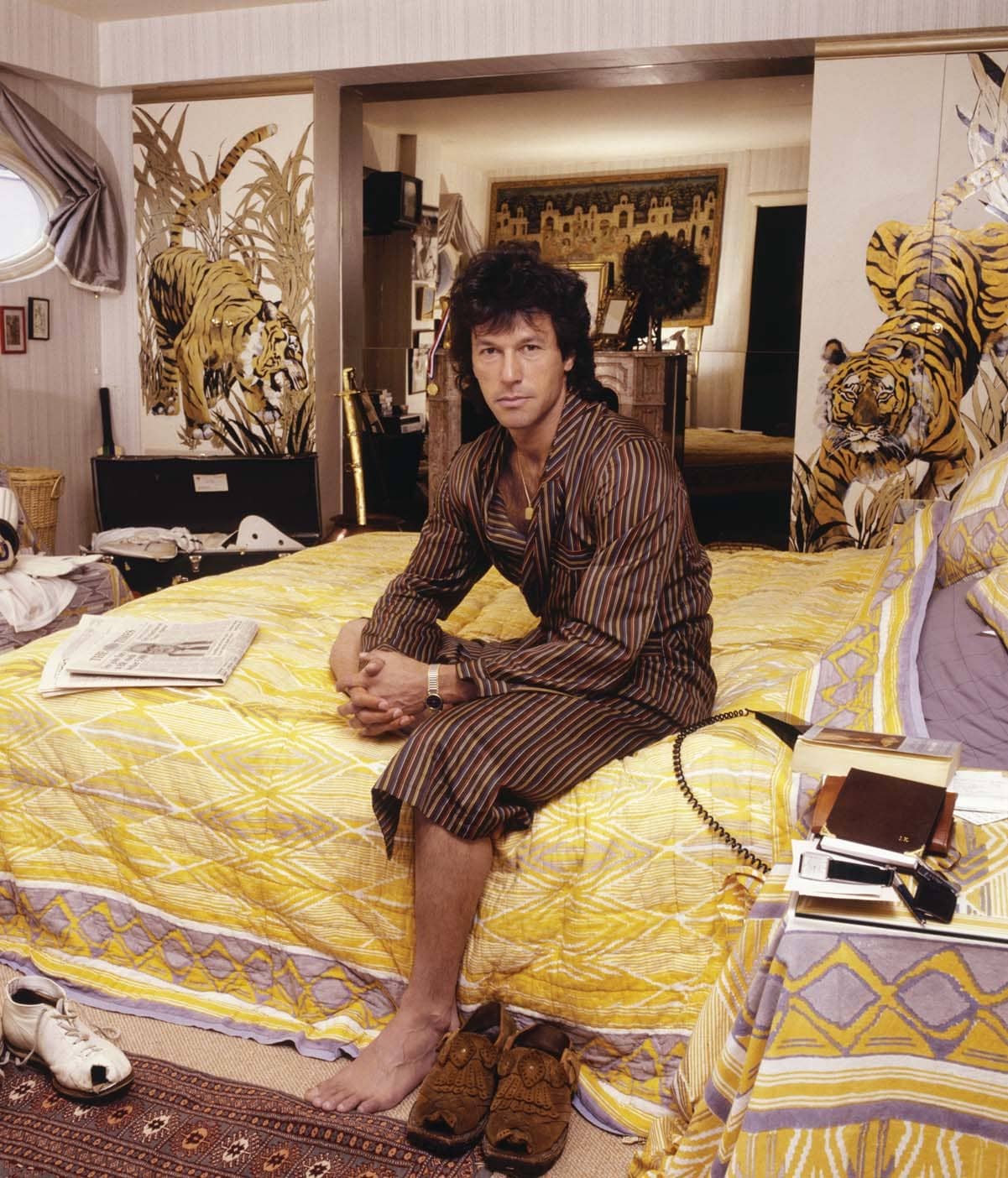 Into this gladiatorial arena, shirt open, eyes bedroom-y, hair long and tousled, stepped Khan. He was one of those rare figures, like Muhammad Ali, who emerge once a generation on the frontier of sport, sex, and politics. “Imran may not have been the first player to enjoy his own cult following,” writes his biographer Christopher Sandford, “but he was more or less single-handedly responsible for sexualizing what had hitherto been an austere, male-oriented activity patronized at the most devoted level by the obsessed or the disturbed.”

Arrestingly handsome and Oxford-educated, albeit with a third-class degree, Khan found the doors of the British aristocracy thrown open to him. Mark Shand, the brother of Camilla Parker Bowles, now the Duchess of Cornwall, was among his best friends; he was seen out on the town with Jerry Hall and

Goldie Hawn; if his second wife, the television personality Reham Khan, is to be believed, he took part in a threesome with Grace Jones. The man who shunned the label of “playboy”—“I have never considered myself a sex symbol,” he told my mother in 1983—nonetheless left a long line of Khan-quests from Bollywood to Hollywood, with a pit stop in Chelsea, where his flat, with its tented ceilings of gold silk, was one part harem, one part bordello. “He had a lot of women in his life,” my uncle, Yousaf Salahuddin, one of Khan’s best friends and a cultural institution in his own right, told me recently in Lahore, “because he was a very wanted man. In India, I have seen women from the age of just 6 to 60 going crazy over him.” In 1995, at age 43, Khan married Jemima Goldsmith, the daughter of the tycoon Jimmy Goldsmith, who is said to have presciently remarked of his son-in-law, “He’ll make an excellent first husband.” As a teenager, I remember gaping over paparazzi photos of the newly wed couple, including some of them in flagrante on a balcony in Marbella. If the fascination with Khan’s sexual prowess was fetishistic in Britain, it was edged with racial pride in Pakistan. As Mohsin Hamid, the country’s most famous writer, told me in Lahore, “Imran Khan was a symbol of emancipatory virility.”

In the mid-1990s, there was not a cloud on Khan’s horizon. He had won the World Cup; he had married an alluring social beauty; he had, in memory of his mother, who died of cancer in

1985, opened Pakistan’s first hospital dedicated to the treatment of that disease. It was a massive philanthropic gesture and the crowning achievement of a life showered with gifts. At that juncture, it might well have been asked what a clairvoyant from a small town in Pakistan had to offer Khan that he didn’t already have.

The short answer is politics. In 1996, after years of turning down pleas from established politicians and military dictators eager to align themselves with his celebrity, Khan launched his own political party. In its first election, the Pakistan Tehreek-e-Insaf party, or PTI—which translates as the Movement for Justice—won zero seats in parliament. Five years later, Khan won one seat, his own. Even by 2013, with his personal popularity at an all-time high, the PTI won only 35 seats. For 20 years, he had been telling his friends and well-wishers that “the next time you come to Pakistan, I will be prime minister.” But four elections had come and gone, two marriages had collapsed in their wake, and the quest of this aging playboy to be his country’s premier was no nearer its end.

It was then, or not long after, that Bushra Maneka had her dream.

Khan, like a real-world version of Stannis Baratheon desperately consulting the Red Woman in Game of Thrones, had begun to see Pinky for “spiritual guidance.” The clairvoyant’s usual fee for making the impossible possible, a senior media figure in Karachi told me on condition of anonymity, was great vats of cooked meat. These, he explained, over a Japanese meal, she fed to the jinns she kept at her disposal.

“Jinns?” I asked, wondering if I had misheard. “She has two jinns,” the media man said, serving me some more soba noodles.

Then he came to the surreal story that is on the lips of every one in Pakistan, from senior diplomats and ministers to journalists and entertainers. Although Maneka has dismissed it as mere rumor, the story has attained the status of fable—a supernatural tale that seeks to illuminate a deeper truth. Once Maneka had her prophetic vision, the media veteran told me, no amount of cooked meat would suffice to fulfill Khan’s ambition. The voice in her dream was clear: If Imran Khan was to be prime minister, it was imperative he be married to the right woman—i.e., a member of Maneka’s own family.

In one version of this torrid tale, Maneka offered her sister to Khan. In another, it was her daughter. Either way, Khan demurred. Then Maneka went away to dream again. This time, however, she was no bystander to someone else’s vision. The voice in her head told her that she, Bushra Maneka, a married woman and a mother of five, was the wife Imran Khan needed. What Maneka now wanted from Khan was what every woman had ever wanted from him: She wanted him.

Khan had never set eyes on Maneka, for she consulted her followers from behind a veil. But this time, he acceded to her vision. The stars aligned and Maneka’s husband, a customs official, agreed to give her a divorce, praising Khan as a “disciple of our spiritual family.”