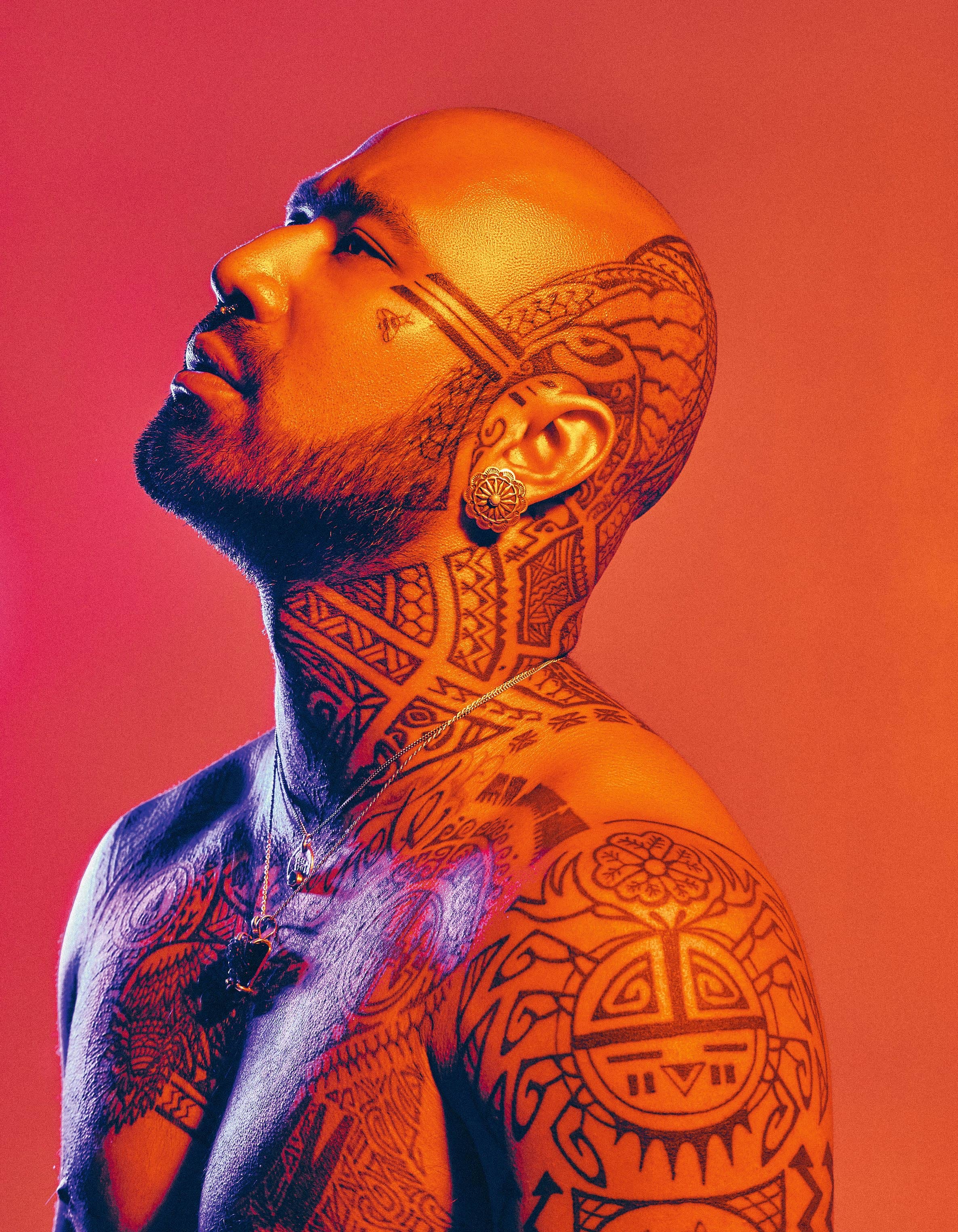 “THE JOURNEY WITH THE GUITAR IS NEVER-ENDING. I AM ALWAYS LEARNING,” SAYS NAHKO BEAR, THE OREGON-BORN GUITARIST AND LEADER OF MEDICINE FOR THE PEOPLE. WITH A NEW ALBUM, TAKE YOUR POWER BACK, INSPIRED BY HIS NATIVE AMERICAN ROOTS, NAHKO LOOKS BACK ON HIS DEVELOPMENT AS A PLAYER AND EXPLAINS HOW ONE NEW CHORD CAN CHANGE EVERYTHING...

Johnathan Horsley
“THERE IS A HUGE DIFFERENCE BETWEEN BEING A MUSICIAN AND BEING A PERFORMER.”

Nahko Bear’s songwriting could be described in any number of ways, but one way to think of it is as storytelling in pursuit of self-discovery and communal healing. Whether his compositions are pared down and presented on acoustic guitar or delivered in the company of Medicine For The People – with horns, violin, and full band –they are typically imbued with a sense of spiritualism.

Stylistically, there is a restlessness to Nahko’s writing, a sensibility gleaned from his travels, leaving home at 17, moving to Alaska, then Hawaii, on the road reading Kerouac and listening to Dylan, but maybe also from his search of identity. Nahko’s songwriting interrogates his sense of self, exploring his lineage as a sixth-generation Apache, born to a Puerto Rican/Native American mother and a Filipino father, and adopted by a white, Christian family and raised in Oregon. Again, it all comes back to the idea of discovery, healing, the stories we tell and those we are told.

One of the first things Nahko did when he moved back to Oregon was to build a sweat lodge on his land. Nahko And Medicine For The People’s latest album, Take Your Power Back, draws upon his experiences in the sweat lodge, finding enlightenment in the heat and the dark of Native American ceremony.

“The whole album is speckled with references to ceremonies,” says Nahko. “There is a lot of mythology, a lot of spiritual storytelling in these songs. [The sweat lodge] is best described as a traditional North American Native practice of praying. It’s a metaphor for going back into the womb of mother nature and sacrificing your tears and your sweat.” Inside you can pray for whatever you want to pray for, and prayer makes its way onto the album in the form of the Healing Song. Is What It Is (The Coyote Burial) came from a vision, while Bend Like The Willow references the sweat lodge explicitly, with a chorus coming from a tribal elder’s words.

“It is a super-fun track, very Afro-beat,” says Nahko. “And it has that Afro-Caribbean guitar licks in it. It’s one that we love to play.” But before the sweat lodge, before Medicine For The People, before he folded Afro-beat, folk, pop and whatever else into a life-affirming sound, before Hawaii, Alaska, traveling around with his acoustic and a notepad, there was the piano. And that’s where Nahko’s story begins...

You didn’t start on the guitar. Where did your musical journey begin?

“I started playing piano when I was six years old and it was kind of laborious. It was supposed to be fun, then you take the lessons and it becomes like schoolwork. My parents really wanted me to play classical music. I was really wanting to play all kinds of music but I just had to get going with classical music. By the time I was 11 or 12, it got pretty serious, playing piano for two, three hours a day. It wasn’t until I was 14 years old when one of my neighbour buddies gave me a guitar. It was one of his old electric guitars, a big f-hole, jazz electric guitar. I can’t remember the brand but I think it was an old Japanese guitar. And then another friend of mine had given me a little Marshall mini-stack [laughs], much to the dismay of my mom!”

Of all the things to bring home...

“You’ve got to remember, my family was pretty conservative and we weren’t really allowed to listen to secular music; everything was real gentle. Even the stuff could play on the piano was meant to be traditional classical music or like church hymns, and being home-schooled, there was this, like... I did everything in my power to try and break free from anything that I was told to do! So trying you keep a kid in classical music, he’s gonna want to play rock ’n’ roll [laughs].”

Is there another instrument on this planet whose popularity owes so much to the onset of puberty?

“Mmm-hmm – exactly, being able to find that one thing that is rebellious. I remember sitting in my mom’s hallway with the Marshall mini-stack plugged in for the first time, and I turned it on, put the 1/4” in. I knew one chord. I knew E minor because it’s two fingers, the easiest chord I could figure out, and I just remember playing E minor like crazy and thinking it sounded so cool! It didn’t take me long to learn four chords, and I remember learning them at one of my friend’s houses.”