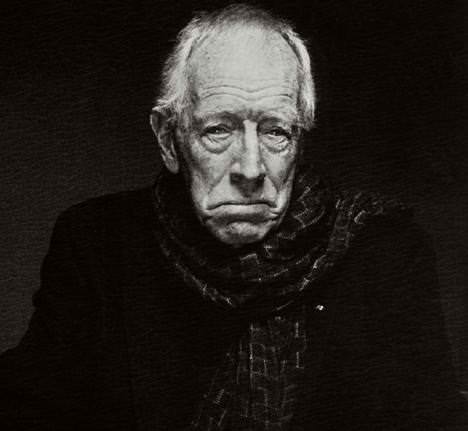 The long, rich career of Max von Sydow, coming to you soon in Star Wars and Game of Thrones.

The Swedish actor Max von Sydow first entered the consciousness of moviegoers as the medieval knight playing chess with Death in Ingmar Bergman’s The Seventh Seal (1957). For a significant portion of his six decades onscreen, he has been the greatest actor alive. Now, in his 87th year on Earth, he may be on the verge of becoming a pop-culture icon. In December, he’ll be seen in Star Wars: Episode VII—The Force Awakens, in a role so fogged in mystery that the fan communities have been half-mad with anticipation. (Could he be Kanan Jarrus, the Last Padawan? Sifo-Dyas, maybe? Or—be still, my heart—Boba Fett?) Sometime next spring, he’ll be joining the high-attrition cast of television’s reigning fantasy-adventure franchise, Game of Thrones, whose almost equally febrile fans at least know whom he’ll be playing—a mentor character called the Three-Eyed Raven. In both parts, it’s probably safe to say, his natural authority onscreen will come in handy. His voice is deep, soft, and rich; his body is long and slender; and he wears fantasy-appropriate costumes (flowing robes, hoods, doublet and tights, whatever) as if he were born in them. His presence is commanding, mysterious. If The Seventh Seal were being made today, von Sydow might well be cast as the other guy at the chessboard, the one playing the black pieces. He’d kill.

He is, in short, having the sort of late career that eminent movie actors tend to have, popping up for a scene or two in commercial stuff that needs a touch of gravity, and receiving, as famous old actors do, the honor of “last billing”: after all the lesser players have been listed, a stand-alone credit that reads “And Max von Sydow.” When actors advance in years, you start to get them in bits and pieces—a moment here, a moment there, and then they’re gone. The ones who have the skill, the craftiness, to make an impression quickly are perfectly at home in these limited parts, and that’s the sort of actor von Sydow has been for his entire career. Even in his Bergman days, he wasn’t always the star. (Bergman, like Robert Altman, had a repertory-company approach to casting, and von Sydow played the lead in only six of the 11 features they made together between 1957 and 1971.)

Besides, being an icon isn’t all that tough, compared with real acting. The audience’s memories of past performances do a lot of the work for you. Von Sydow has appeared in well over 100 movies and TV shows, which makes for plenty of memories. Even relatively casual, non-art-house viewers may recall, say, his sodden King Osric in Conan the Barbarian (1982), or the mute, ornery tenant of Extremely Loud & Incredibly Close (2011), or the dapper assassin in the fedora in Three Days of the Condor (1975), or the shifty-eyed bureaucrat of Minority Report (2002). If nothing else, they will surely remember the title character of The Exorcist (1973), in which von Sydow, as a frail, elderly Jesuit, engaged the devil in some pretty fierce soul-to-soul combat.