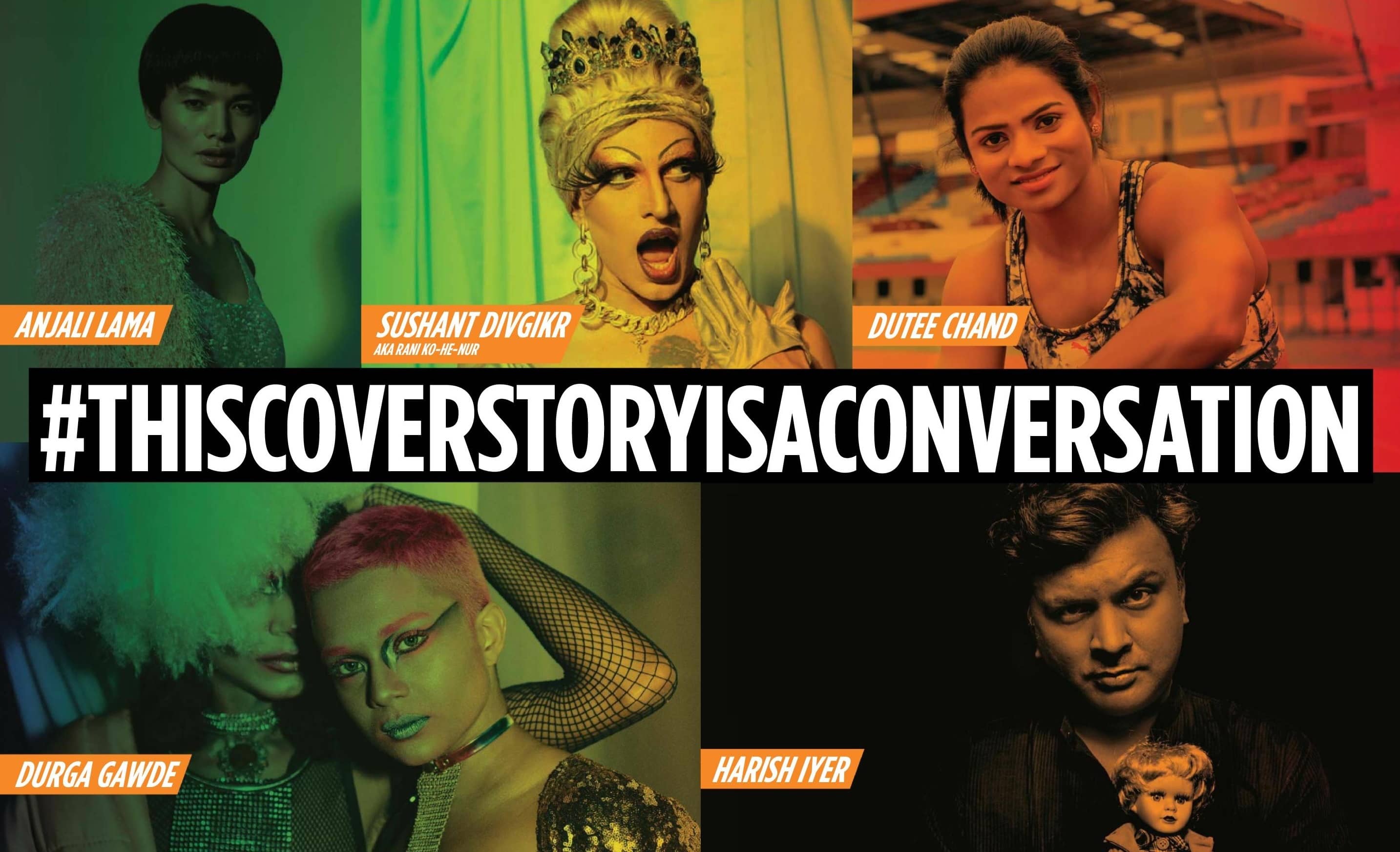 Our five cover stars sat down for a live session to talk about the LGBTQ+ community, growing up queer and the courage it takes to be yourself on a public platform

When I sat down to write this story, I thought long and hard about what the LGBTQ+ community means to me. A ‘safe haven’ and ‘place of acceptance’ come to mind of course, but so do the words ‘family,’ ‘friendship’ and ‘togetherness.’ It’s cheesy, but it’s the best way to describe the unconditional support that envelopes you once you dive in.

Whether it was coming to terms with the idea of being queer, needing a shoulder to cry on when life didn’t work out or just dancing the night away at LGBT parties like Salvation Star, my memories with many incredible members of the community have stood as pillars of support throughout my adult life. They’ve carved a major chunk of my identity. I learned that I wasn’t alone and judgment, discrimination, fear and hardship are battles we all fight together no matter where on the rainbow spectrum we fall. It’s that shared experience which creates a community-wide understanding that we need to protect not just ourselves, but also one another.

For Rolling Stone India’s Pride campaign in 2020, we chose to lend our platform to the LGBTQ+ community to celebrate their stories, battles, victories, contributions to Indian history and pop culture. There are many shades beyond the seven in the rainbow of LGBTQIA+, and it was a learning experience for everyone involved, a way to better understand not only this diverse and incredible group of humans but also delete any lasting misconceptions and ignorance that lingered in our own minds.

Whether it’s the more personal incidents in day-today life or the gargantuan see-saw display from 2009 to 2018 regarding the infamous Section 377 of the Indian Penal Code that criminlized homosexuality, we’re all in this for the long haul--and perhaps our five cover stars for June embody this idea better than anyone else in the country.

Activist and author Harish Iyer (he/him) has been in the forefront when it comes to the legal battles of human rights for the LGBTQ+ community in India, standing on the frontlines of bureaucracy to grant everyone under the umbrella the equality that is so very much deserved. He was one of the first few individuals to officially move the Indian Supereme Court to decrminalize homosexuality in 2009 and in June 2018, he was the one to file an Impleadement Application in the 377 case which would eventually help win the battle to decriminalize homosexuality in the nation. His personal experiences and victories gave him the strength to be a backbone to thousands of others, his involvement in media advocacy raising the voice of the community to new heights right from the early 2000s. “I must have listened to around seven, eight lakh survivors of child sex abuse and people who are in conflict with their sexuality,” he says about living, learning and surviving so that he may help others do the same. “Now I am a professor in the same college, I’m a visiting faculty in the same college that bullied me and pushed me to suicide. So I think for me, my whole life has been about revisiting and reconquering everything that I’ve lost.”

While Iyer jumped into activism, actor, model, singer and drag artist Sushant Divgirkr (he/him) braved the tide of another kind--creating a space for the community in the world of entertainment and pop culture. “Gay people are portrayed as lecherous and used as comic relief in movies and stuff like that,” Divgikr says. “We are one of the most lucrative film industries in the world. So you can’t have just one or less than one movie a year which normalises LGBTQI+ characters and say we are doing something [to represent]--we’re not.” From winning the mantle of Mr. Gay India in 2014 to participating in the massively popular Indian reality show Bigg Boss, Divgikr was determined to show Indian audiences there’s more to the LGBTQ+ community than outdated stereotypes. His performances as his drag persona Rani Ko-HE- Nur paired with his celebrity from reality TV helped open the doors to conversations around drag--still a highly misunderstood form of performance art in India but on a fiery rise.

Nepali model and activist Anjali Lama walked a similar path, taking the world by storm in 2017 when she became the first transgender woman to walk on an Indian fashion runway. It was a massive victory for representation and an achievement that Lama still considers her most memorable even today. “That was like my life’s very ‘wow’ moment,” she says. “After that people got to know me, after that I got to meet [her fellow cover stars.] Everything just took off. I got to do so many big campaigns and walk for many big designers, so absolutely Lakme Fashion Week 2017 was the best moment for me.” We’d talked about her landmark walk back in 2017, and she’d explained that she wanted to be booked for more than just ‘being a transexual model.’ It’s a goal she seems to have achieved, today walking the ramp for several notable brands, booked solely on the basis of her walk and stunning bone structure.

Of course when it comes to making history, there’s no one who did it quite like Dutee Chand (she/her.) In addition to being a professional sprinter and current national champion in the women’s 100 metres event in the Olympics and becoming the third Indian woman to ever qualify for the Women’s 100 metres event at the Summer Olympic Games, Chand is also the country’s first openly-gay professional athlete. Despite the backlash from her hometown Jajpur, Chand stood firm in her decision to live her truth. “Whether it’s falling in love with a man or a woman or anything in between, no matter who your love is for, it is valid,” Chand says. “People in society always believe that love and family looks a certain way, that marriage only between a man and a woman and then they have children and that is life. But I think that is wrong”

In the conversation below, artist, sculptor and gender-fluid non-binary rainbow warrior Durga Gawde (they/them) touches upon the subject of the heteronormative boxes society is determined to shove us into the moment we are born (sometimes even before.) They outline an experience that’s perhaps familiar to so many of us who identify as female or are born in ‘feminine’ bodies--there’s a loss of agency once puberty hits and having a female body brings with it a whole storm of societal expectations and control that male bodies aren’t subjected to.

A piece they wrote when they were 18 (which they were kind enough to share with us during the conference) hit particularly hard: ‘Being a woman feels like a curse. I am handicapped without a man. Why should it be this way? I feel like a complete useless being. Why can’t I go anywhere alone? Why can’t I just be free?’ Their words reminded me of the fake ‘wedding ring’ I wear whenever I travel alone, pushing away the men and societies of every nation I set foot in who try their luck for a hookup. It’s hard to grasp that a non-existent husband who only rises as a safety shield when I walk to my business meetings will be respected more than my own choices--”No thank you, I’m married” will keep me safer than “No thank you, I’m not interested” and it’s still not a guarantee I’ll get home safe. Gawde’s art, voice and belief in the freedom that we all equally have a right to, add steel to my spine and that of many others. Perhaps that’s true of all of our cover stars, who have bared their identities and their souls, worked tirelessly with courage to make the world a better place for our community.