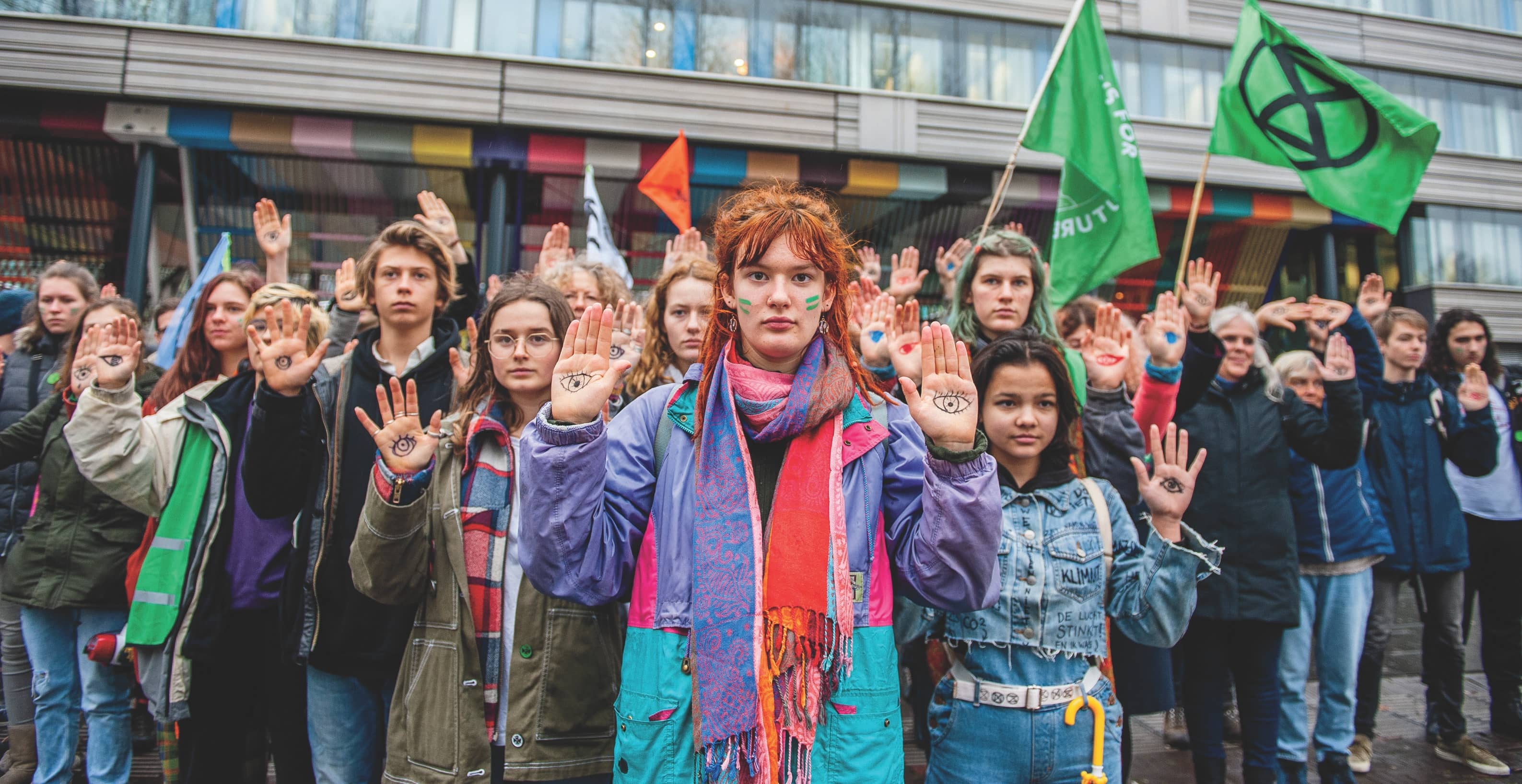 ONE MONDAY MORNING last April, an Englishman named Simon Bramwell glued himself to a glass door at Shell’s London headquarters and refused to leave.

Bramwell, 47, is a co-founder of Extinction Rebellion, a two-year-old climate-activist group dedicated to the belief that real change will only come through mass civil disobedience. For the next 10 days, XR, as the group is known for short, launched a series of coordinated actions targeting several sites throughout London — blocking traffic outside the stock exchange, interrupting train service at Canary Wharf, and generally bringing the city’s business to a snarling standstill.

The atmosphere was more jovial street fair than window-smashing anarchist mob. Activists brought potted trees to the middle of Waterloo Bridge and danced to a samba band while shutting down Parliament Square. More than 1,000 people ended up being arrested — teenage students, octogenarian retirees, teachers, construction workers, doctors and nurses, and a 41-year-old marine biologist who was seven-months pregnant — many of them for the first time.

Extinction Rebellion is part of a new generation of activists treating global warming not simply as an environmental problem, but an existential one — and amplifying their tactics accordingly. With the science growing increasingly dire, and the world’s governments still refusing to act (or worse, denying there’s a problem), marches and calls to Congress, these groups say, aren’t enough. “Unfortunately, people just don’t pay attention to petitions,” says Liam Geary Baulch, 26, an action coordinator with XR. “Movements win by causing disruption.”

Or as another activist put it: “You can have a million people marching each week and no one cares. But you block a road, people take notice.”

XR has positioned itself in explicit opposition to older, more established groups like Greenpeace and the Sierra Club, whom XR views as insufficiently confrontational for the crisis at hand. One of XR’s very first actions was to occupy Greenpeace’s office in London, where protesters delivered cake and flowers to the staff while simultaneously imploring them to up their game. “Failure to do things differently, when everything is failing,” an XR statement said, “can only be described as complicity.”

Greenpeace, of course, is no slouch in the law-breaking department, with a long history of provocative actions and hard-won victories. But even some leaders acknowledge that their more targeted, small-scale approach — while effective — has been outpaced and dwarfed by the sheer enormity of the problem. “The movement has evolved because it wasn’t working,” Annie Leonard, executive director of Greenpeace USA, has said. “The science is stronger than ever, and we’re still losing.” Now, even Greenpeace is starting to take a page from XR’s civil-disobedience book, co-organizing Jane Fonda’s Fire Drill Fridays, in which the actress and her supporters get arrested the first Friday of each month.

At first blush, the concept of a “rebellion” to combat climate change might sound extreme. But given both the incomprehensible scale of the catastrophe and the inertia we must overcome, it also seems almost comically pointless to, for example, stand outside a grocery store holding a clipboard, asking people if they have a minute for the environment. If society is going to change as drastically and urgently as we need it to, some level of painful disruption seems necessary.

But how much? At one end of the spectrum, emails and petitions seem too easy to ignore. But disrupt too much — start getting people fired because they can’t make it to work on time, or prevent an ambulance from reaching a hospital — and you risk turning off the exact people whose support you need. What, then, is the proper degree of nuisance for a climate activist? How far is too far — and how far is not nearly far enough?