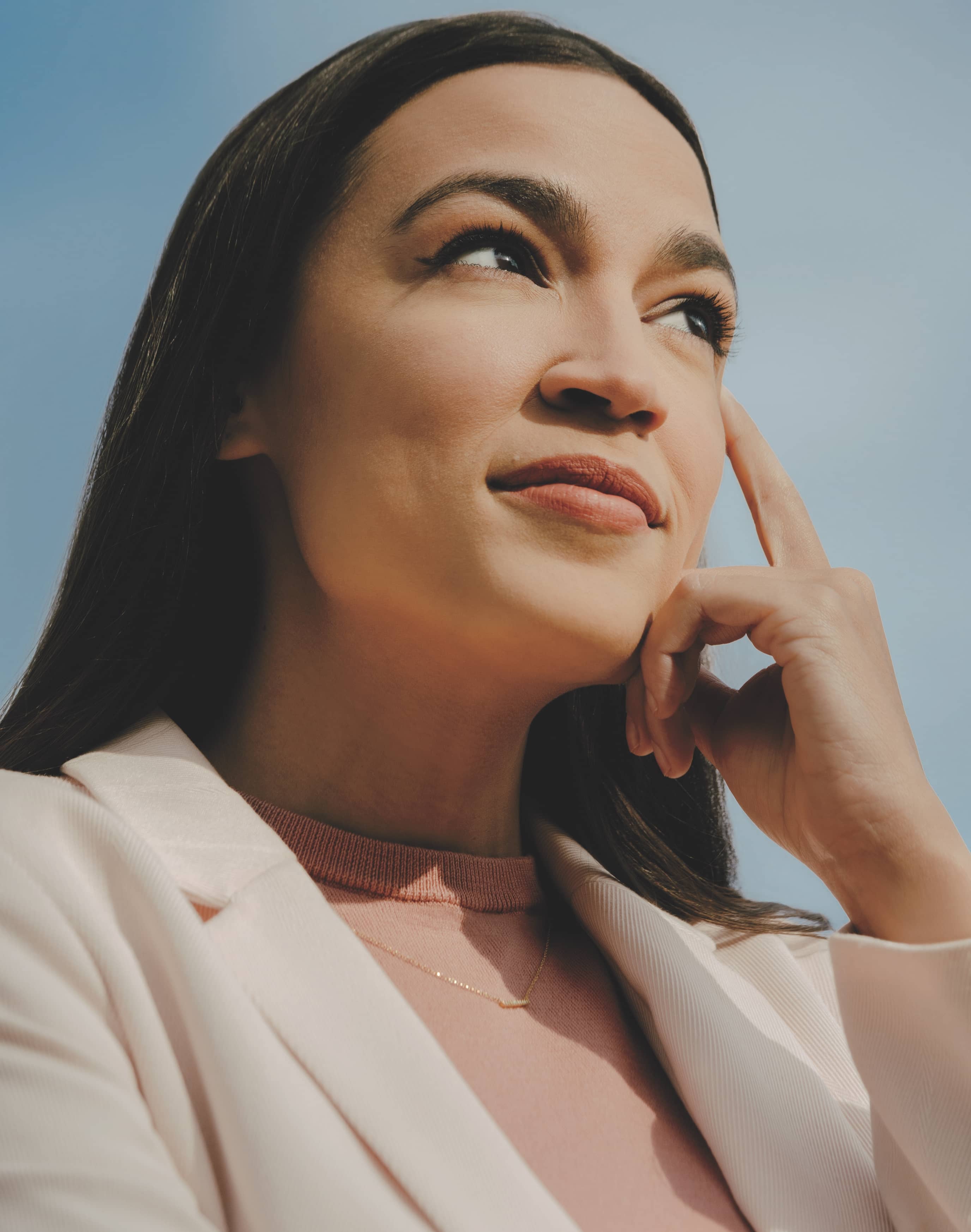 THERE WAS, essentially, no Green New Deal before Alexandria Ocasio-Cortez. It was just a slogan rolling around the mouths of newspaper columnists and environmental activists until the 30-year-old political phenom put her star power behind it. Just a month after she was sworn in as the youngest congresswoman in history, Ocasio-Cortez and Sen. Ed Markey debuted a 14-page resolution outlining the principles she hopes will form the foundation for a slew of climate legislation over the next decade. A jobs program to save the planet shouldn’t be all that controversial, but skeptics along the political spectrum found something to hate. The concept was ridiculed by Republicans even as some attempted to co-opt it (Rep. Matt Gaetz’s Green Real Deal), and deemed too audacious by liberal Democrats like House Speaker Nancy Pelosi. But the Green New Deal’s ambition was always the point, and in just one year, it has already dramatically changed the way Washington talks about the climate crisis. In January, the House Committee on Energy and Commerce released a plan committing to a 100 percent clean- energy economy by 2050 — three times longer than the Green New Deal’s 10-year timeline, but a quantum leap from the toothless regulations that typified past policy conversations. Ocasio-Cortez sat down with Rolling Stone to reflect on her first year in office, her climate anxieties, and her blueprint to fix what’s broken in our country.

A lot of people have an “Oh, shit” moment with climate change — something that wakes them up to the scale and severity of the crisis. What was your moment?

I think it happened in two phases. The first moment happened at Standing Rock. I was there with native communities and leaders. It was their land, secured via treaty with the United States, that we decided to violate because a fossil-fuel company had essentially purchased our politics. Just standing there, [seeing] people organized against these massive tanks, these armed guards. [But] it wasn’t the U.S. military that people were standing up against; it was a militarized corporation — a fossil-fuel corporation. That, to me, was the “Oh, shit” moment in terms of what it’s actually going to take — because it’s not just about the science, it’s about the systems that protect all of the power that goes into defying the science.

But in terms of the cost and the scale, the second “Oh, shit” moment happened with Hurricane Maria the following year. I lost my grandfather in the aftermath of Maria.

I didn’t know that. What happened?

He was in a hospital in the storm, on the Western half of the island. And these are the kinds of casualties that are not counted. Power went out across the entire island, and roads and bridges, infrastructure was so compromised. Medicines couldn’t be transported. And my grandfather passed away while he was in the hospital. And the thing is, I can’t say, “Oh, the hurricane killed my grandfather.” Right? But we don’t know. Did he not get medicine in time? There was little to no power, or communication to my family. This was also a time when the government was saying that only 64 people died. We know that the number is actually in the thousands.

The Green New Deal was a top priority for you when you came to Congress. There was an idea that the resolution was worded vaguely to bring in the broadest possible coalition. How confident are you about getting a broad coalition signed onto specific details?

The Green New Deal [was] worded very deliberately, because what was very important for us is that we had to put out a comprehensive vision with underlying principles. No matter what kind of policy we’re talking about, it had to be bound by three things. The first is a drawdown of carbon emissions on a 10-year timeline. The second is the creation of jobs — having this be industrial policy to create millions of jobs and provide an economic stimulus for working people, not for Wall Street. And the third was to center front-line communities, to make sure that this policy was not just prosperous and scientifically sound but that it was just.

Bringing that broad coalition into agreement on those three core principles is extraordinarily important because it cuts down on a lot of our fights in the future. The traditional divide in climate fights has been an artificial conflict created between labor and environmental organizations, and this resolution rejects that fight outright. And by adhering to these principles, we have environmental organizations saying, “Listen, we have committed to economic prosperity for everyday people.” And we’ve got labor groups saying, “We have committed to carbon drawdown and centering the most disparately impacted.”

How did you go about getting the first draft of the resolution together?

Well, it was an extremely complicated process because we were committed to drafting legislation that was truly bottom-up. The extra challenge was that even among nonprofits, there’s still something of a hierarchy, right? A lot of D.C. groups can be heavily white or heavily affluent. We took a lot of input from groups in D.C., but we did a lot of work to reach out to experts in front-line communities. We were able to work with organizations like the Climate Justice Alliance, which brings together indigenous perspectives, black perspectives, Appalachian perspectives. So a lot of it had to do with making sure we were partnering the science and the economics with the realities on the ground.