ARMAAN MALIK: THE MAKING OF A POP STAR 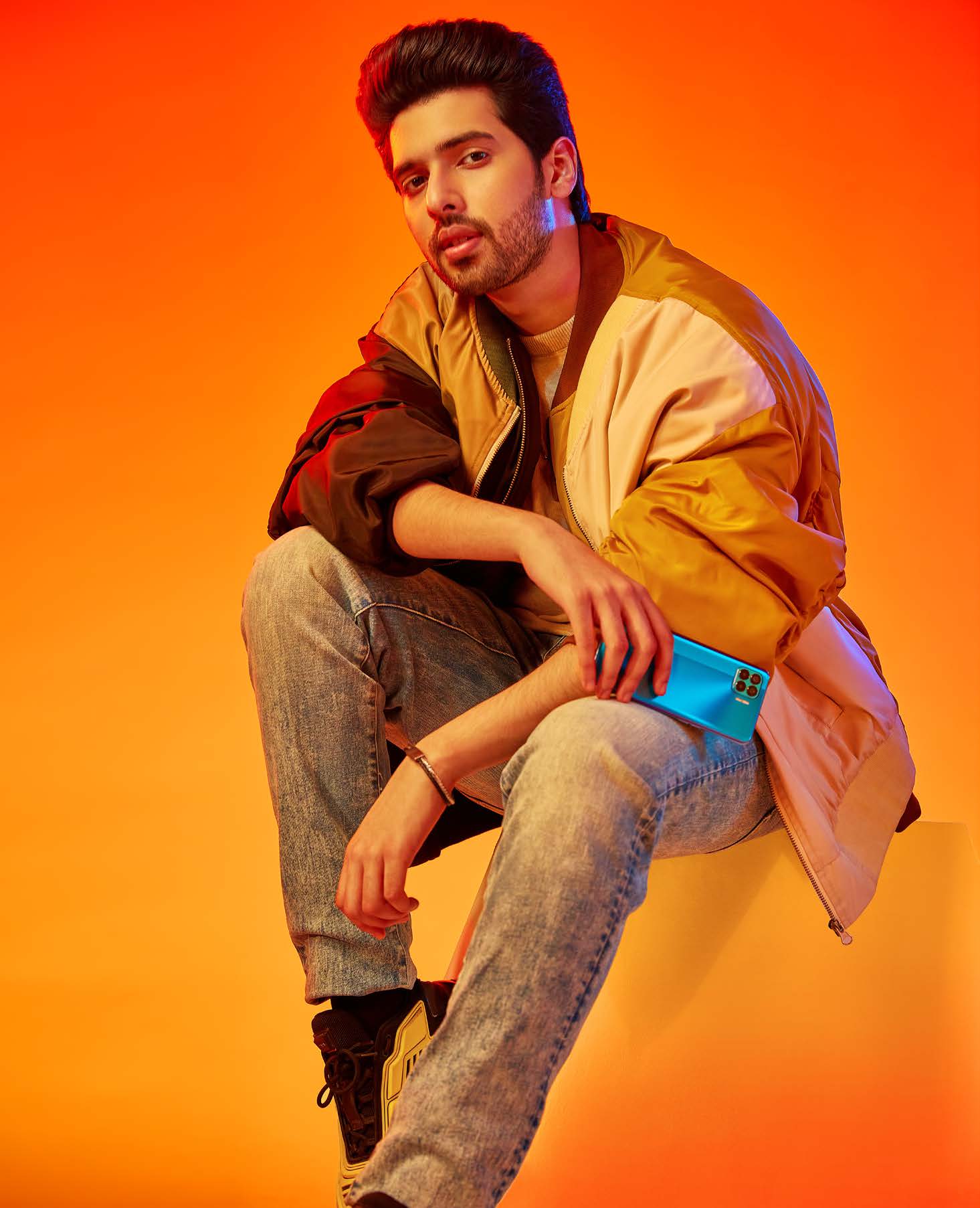 THE SINGER-SONGWRITER ON HIS COMPLEX RELATIONSHIP WITH BOLLYWOOD, LOVE FOR K-POP AND HOW HE’S GEARING UP FOR THE GLOBAL STAGE

Solid round neck T-shirt by Bhaane; Jacket by The Source; Denim by American Eagle; Sneakers by Prada

Armaan Malik believes in manifestation. “Have you read this book, The Secret?” he asks me when we connect over video call one afternoon. I tell him indeed I have and he smiles. “That is what I believe. The more you think about what you want, that’s what you get.” In the bestselling book, author Rhonda Byrne advocates that if you focus on something enough, have faith in yourself and in the universe, you can achieve your biggest dreams. And Malik certainly isn’t afraid of dreaming big.

The 25-year-old singer-songwriter’s career in Indian music is like no other. He’s been deeply involved in the industry since he was 10 years old, starting out as a playback singer for several iconic films, including Taare Zameen Par (2007), Bhoothnath (2008) and 2.0 (2018). He’s sung for films in over a dozen Indian languages, including Hindi, Kannada, Telugu, Tamil, Bengali, Marathi, Gujarati, Malayalam and Assamese. In January this year, his track “Buttabomma” from the Telugu film Ala Vaikunthapurramuloo, blew up across the Internet, clocking in 360 million views on YouTube and over 13 million Spotify plays, cementing his nation-wide fame. He’s a household name at this point, having performed more than 200 shows around the globe— including one at SSR, Wembley when he was just 20. He has also the youngest Indian singer to be a coach on The Voice India and the youngest recipient of Filmfare’s R. D. Burman Award for New Music Talent. But even with all these incredible achievements, Malik felt he wasn’t the artist he truly wanted to be.

Malik hails from one of the most illustrious families in Indian music; his father is Daboo Malik and his uncle Anu Malik—both prominent composers in Bollywood. His brother Amaal has also made his name in the same field. But for Armaan, the need to carve an identity outside this legacy was greater. “I had this dream of becoming a pop star and doing my thing globally,” he confesses. “But obviously, in India, Bollywood is the mainstay.” In a country where there wasn’t exactly a space for independent pop artists until quite recently, the only option for Malik to pursue music was via the film industry.

“My dad actually sat me down and told me, ‘Armaan, this is a country where Bollywood is consumed a lot. And in order to become a successful musician, you would need to become a playback singer,’” he recalls. “And I was like, no I want to sing my own songs, write my own stuff and feature in music videos.” He says while his father understood and supported those dreams, reality wouldn’t be quite as kind. The advice he got was to make a name in Bollywood first, work hard towards success and eventually build a fan base. It’s advice he took and appreciated, but while he was grateful for his subsequent success in the Indian film industry, there was a tinge of bitterness he couldn’t quite chase away.

It wasn’t long until he hit a slight lull. Music wasn’t exciting him as much as it used to, and that was the motivator for the massive change he was about to undertake. He wiped his Instagram clean save for one cryptic post that declared, “I can’t take it anymore.” It sent his fans into panic, heralding a flood of concerned messages and comments. While the words may have come off a little darker than he expected, they weren’t quite the cause for concern; they were lyrics to his first English-language single “Control.”

Dark, sultry and dangerous, “Control” dropped in March and was about the push-and-pull nature of a toxic relationship. It marked Malik’s first dip into pop-R&B, plus the debut of the artist he likes to call ‘Armaan Malik 2.0.’ Written and produced by Malik in collaboration with American producer Wayne Wilkins (whose resume includes hit tracks for Beyoncé, Jordin Sparks and Natasha Bedingfield), it was a big step away from the boy-next-door image he had built in his Hindi music videos and performances.

“I realized that I have this intense side to me,” he says. “I think with my music and my whole artistry, I am in a phase where I’ve outgrown that cute boy thing.” In the neon-lit music video that accompanies the track, Malik sports a leather jacket and slicked-back hair to pursue a mysterious woman who has him under her spell. It’s sexy, playful and tinged with a sweet desperation that works incredibly well for him.

The shock of Malik’s image change plus the brand new sound were the building blocks of a hit—”Control” took off immediately, sitting at Number One on iTunes India and earning Malik a billboard in New York City’s Times Square, promoted by Spotify. The singer-songwriter created a massive buzz on social media, drawing the attention of international audiences and media, who saw similarities to Western pop darlings like Charlie Puth and Shawn Mendes, plus all the makings of a new pop phenomenon. Indian fans began to see him as India’s answer to Western pop, with many considering him close to a messiah that could lead the country to global pop domination. A top comment on “Control”’s YouTube page declares, “Now India will also rise in the field of English songs, just like K-pop has done for Korea.”

His following English track “Next 2 Me,” which dropped in June, wasn’t an official single but still went on to hit Number One on Billboard’s Top Triller U.S. and Top Triller Global charts—a first for an Indian artist. As Malik gets closer to releasing his second official single, he’s confident things will change on an even bigger scale— even if it might come with bigger risks. “When you’re doing something new, you always hope it doesn’t make a negative impact or people don’t write it off,” he says. “I’m trying to change my whole direction, and if people don’t accept this, then where am I going to go and what am I going to do?”

In this honest and in-depth interview with Rolling Stone India, the singer-songwriter opens up about his long-term but complex relationship with Bollywood, being inspired by K-pop to fight for representation, and reinventing himself to become the artist he always wanted to be.

Over the past year or so we’ve been seeing so much conversation about who India’s breakthrough global pop star will be, and you are one of the names leading the mix along with artists like Raja Kumari and Prateek Kuhad. Why do you think now is the right time for Indians to make that jump to international pop recognition?