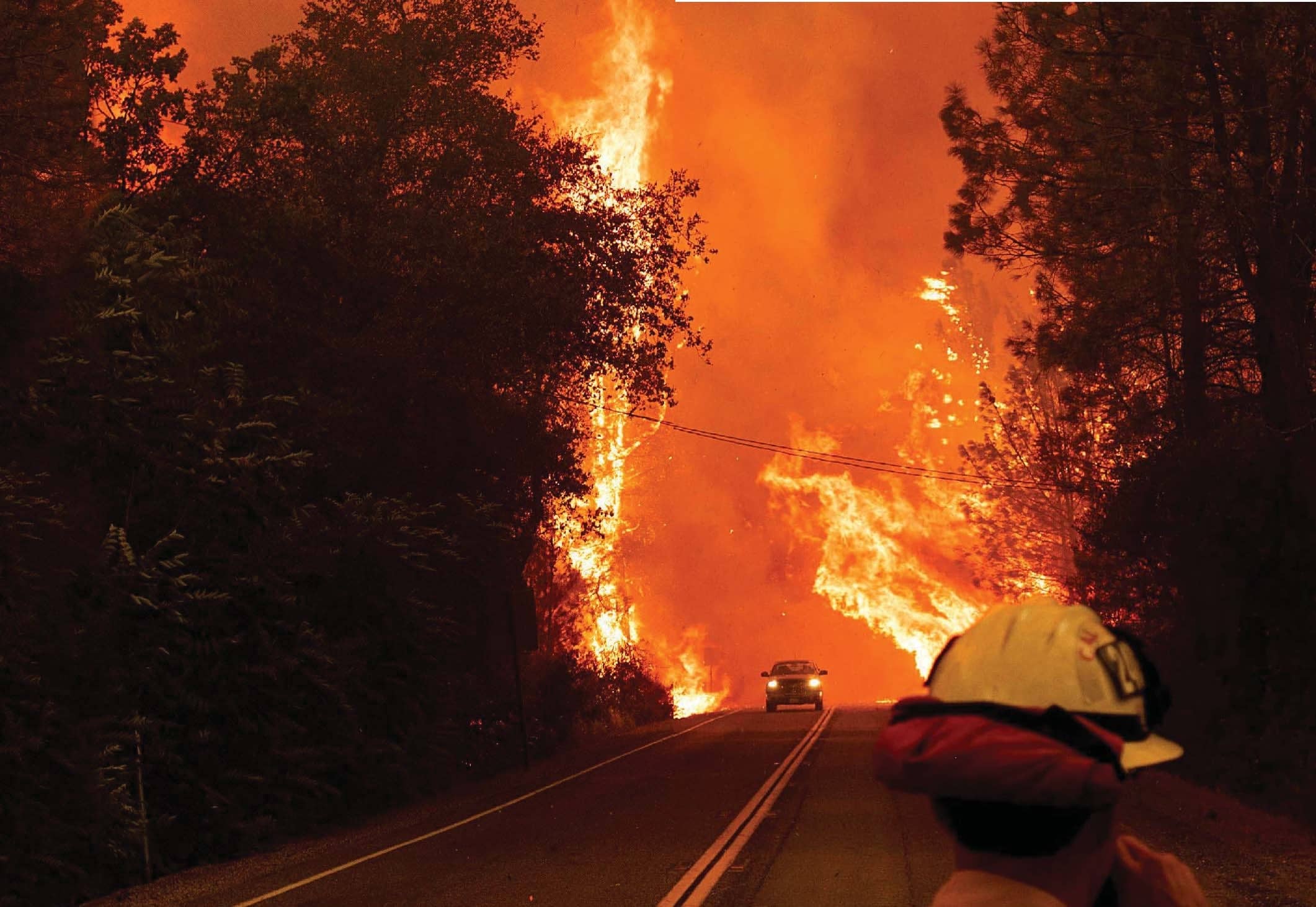 Half inferno, half cyclone, the Carr Fire burned as hot as 2,700 degrees and packed winds that turned trucks into wayward missiles. Would anyone caught inside it survive?

Death blew east on a savage wind, driving flames over foothills and across a river, spitting glowing embers and scrubbing the earth bare. It was coming for Don Andrews.

The firestorm shook the ground and roared as loud as a passing train. The windows on Andrews’s bulldozer shattered, flinging glass into his face. The blue-green shards were everywhere: on the floor, inside his helmet, in his skin and eyes. He was alone and blinded.

I’m not going to survive this, he thought.

Andrews, 60, wasn’t supposed to be this close to the edge. He’d been hired that day, July 26, 2018, by the California Department of Forestry and Fire Protection (Cal Fire) to work with two other bulldozer drivers to carve a thick ring of dirt around a subdivision of homes near the city of Redding. It was a fairly routine assignment—the containment lines were three dozer blades wide and designed to halt the advance of the wildfire, which was still miles away.

What Andrews didn’t know was that the Carr Fire—to that point a rather ordinary California blaze—had spawned something monstrous: a fire tornado the likes of which the state had never seen. 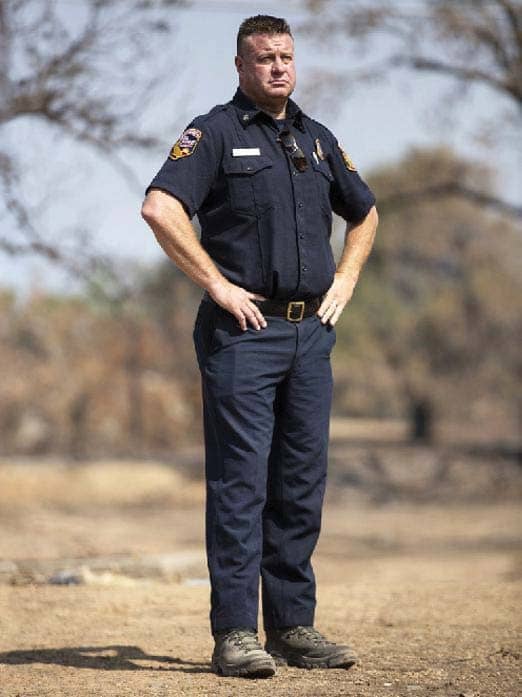 A freak of meteorology, it would annihilate everything in its path, uprooting trees and crumpling electrical towers. It was a vortex of air wrapped around a column of rising heat, flames licking its unseen walls.

Andrews hunkered down. He gripped the dozer’s protective foil curtains closed with his left hand to keep the wind from batting them open. With his right hand, he pulled his shirt over his nose and mouth. The heat seared his throat.

Temperatures within the tornado soared to 2,700 degrees Fahrenheit. A nearby Cal Fire truck exploded.

Andrews dialed 911. His singed hands trembled. A dispatcher answered, on the verge of tears. Dozens of others had phoned in already, describing the unfolding hell.

Now here was a call from ground zero.

“I can’t. It’s all on fire around me. Don’t risk anybody’s life for mine.” 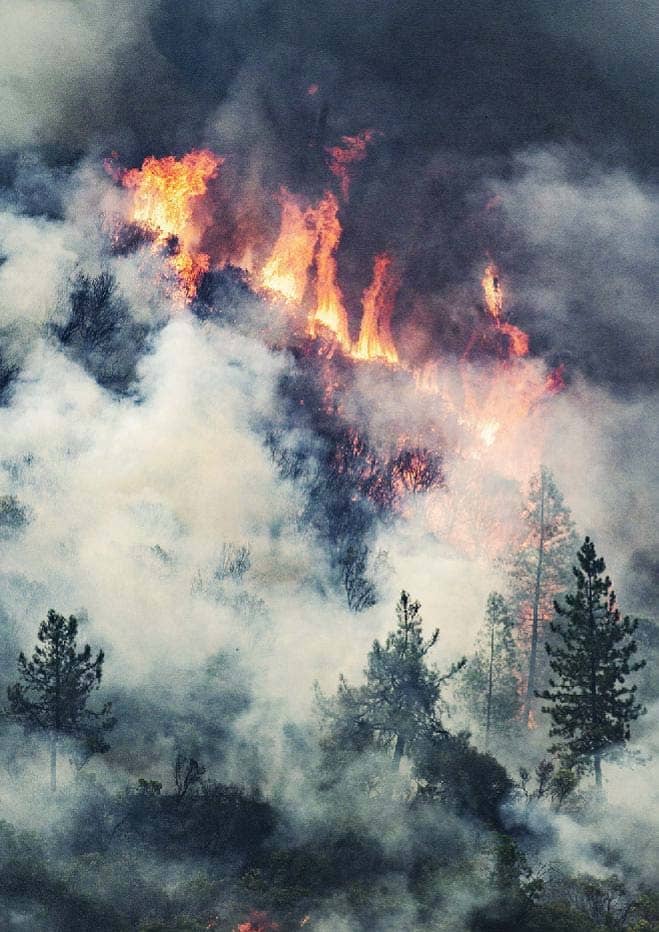 “NOBODY IS GOING TO BELIEVE THIS.”

The wildfire had begun in typical fashion— human error colliding with a dry landscape primed to burn. It hadn’t rained in the area since May, and winter precipitation had been 58 percent below normal. More than a dozen other wildfires were already burning across the state, so resources to fight this one were stretched. On July 23, an older couple driving home from a vacation cut through Redding. A tire on their trailer went flat, leaving the wheel to drag on pavement. Sparks flew into parched grass. The fire quickly spread.

Incident Commander Tom Lubas, a 23-year veteran of Cal Fire, and his colleagues set up a command center, called in more firefighters, and carved containment lines. But then the fire exploded from 4,599 acres to nearly 30,000. 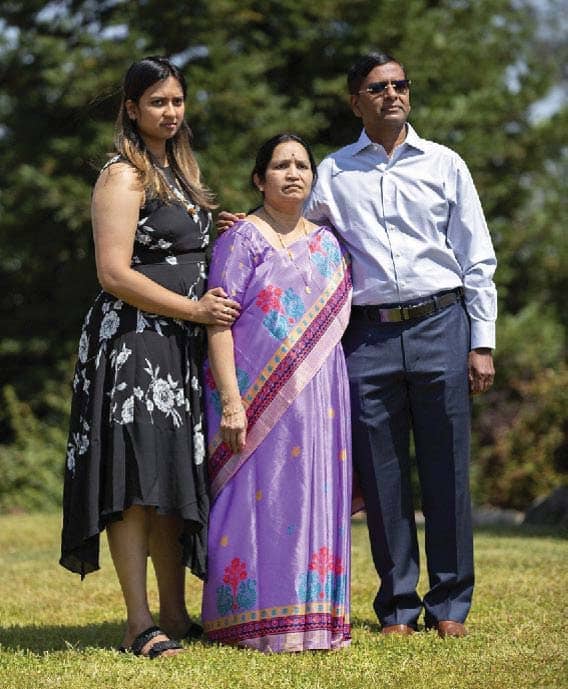 Just after noon, Lubas handed off his incident commander role and left base camp at the Shasta County fairgrounds in Redding. Though he had worked in the morning, it was supposed to be his day off, and now he planned to shower and rest. From his truck window, Lubas watched as a 30,000-foottall convection column—a plume filled with ash, debris, and hydrocarbons— ballooned into the sky, sucking up the hot air as oxygen fed the fire.

As he drove, his truck registered the temperature outside: 113 degrees. On the coast, 95 miles to the west, it was 59 degrees. As the cool coastal air blew over Bully Choop Mountain and into the Sacramento Valley, the 54-degree difference caused warm air to shoot up in a vortex. As day turned to dusk, the convection column would rotate faster and faster, contorting into a cyclone.

Sometime after 5:30 p.m., as Lubas finished grocery shopping, the sky grew dark. The fire’s behavior alarmed him, so he went back to work, driving to the hills northwest of Redding to assist in evacuating residents. But an hour later, he stopped. He was blocked.