What's Wrong With Me? 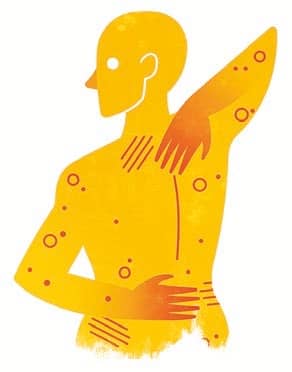 IN THE SPRING of 2015, Eva and her husband had no immediate plans to move from their cozy apartment in Geneva, Switzerland, where they’d lived for years.

But when Eva started itching all over—even waking up at night to scratch—and her skin erupted in lesions, her family doctor guessed that her home was likely infested with bedbugs. Eva hadn’t spotted any signs of the pests, nor did her husband complain of bites. Nevertheless, she called exterminators.

When their services made no difference, Eva’s anxiety escalated. The unbearable itching was constant, and her sleep suffered. Pushed to a breaking point, she and her husband found a new place to live. But the itching didn’t stop.

Eva’s doctor ran a few simple blood tests, including one looking at kidney function and another at liver enzymes, and took a chest X-ray, but these were normal. Eva had a slightly high level of an antibody called IgE, which could indicate allergies. But antihistamines didn’t get rid of the itching or the rash, and topical steroid creams didn’t help, either. Unable to sleep or stop scratching, let alone focus on work, Eva reluctantly took a leave from her job.

Fourteen months after the itching started, small, hard lumps, or skin nodules, began appearing on Eva’s arms, legs, back, and buttocks. This condition is called nodular prurigo, and it sometimes develops after longterm scratching. There are numerous underlying conditions that can be associated with it, including kidney disease and anemia, but anxiety and depression are also triggers. Since Eva appeared physically healthy, her doctor theorized that anxiety from the initial bedbug bites may have led to chronic, unstoppable itching.