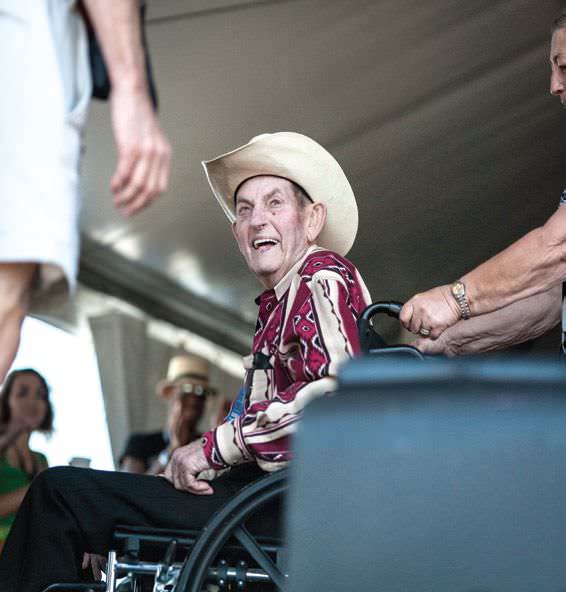 Cajun music lost its most beloved and colorful character, Doris Leon “D.L.” Menard, on Thursday, July 27, 2017, after he succumbed to multiple ailments. The legend was 85.

At his funeral, held at Lafayette’s Family Life Church, Professor Emeritus of Francophone Studies and Folklore at University of Louisiana, Lafayette, Barry Ancelet described the largerthan-life character as “a dignified and elegant ambassador of our culture. He was always dignified, respectful and respectable.” Ancelet also remarked that Menard’s sense of humor was consistently “razor sharp and lightening quick.”

During his illustrious career, Menard performed in 42 states and 38 countries, bringing joy and magic to whoever saw him. “You got to entertain the people,” Menard always preached, and that was a credo he never failed to live up to.

Dubbed “the Cajun Hank Williams,” Menard was most famous for his ubiquitous composition “La Port en arriere,” translated in English as “The Back Door,” that sold 500,000 copies in 1962. Since then, Flat Town Music Company honcho Floyd Soileau estimates that it has sold over a million copies. It’s one of the most recorded songs in the repertoire, not only in French but sometimes in English and other languages. Longtime friend and bandleader of the Cajun band Jambalaya, Terry Huval, recalls even seeing a version of it recorded in Swedish.