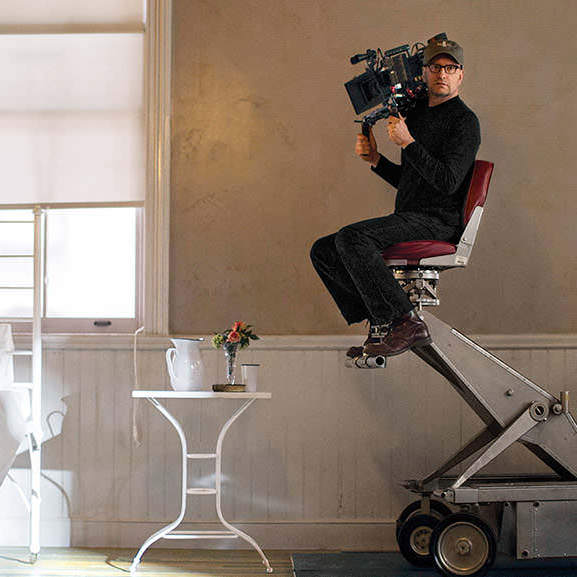 Steven Soderbergh can make a whole season of The Knick almost as fast as you can watch it.

Steven Soderbergh is in motion. It’s a warm day in Greenpoint, and the 52-year-old director, cinematographer, editor, and executive producer of Cinemax’s late-Victorian-era hospital drama The Knick is on the show’s main set, camera in hand, circling a table in a surgical theater, blocking a scene in which a patient’s gallbladder is removed. Soderbergh speaks softly. The cast and crew hang on every word. Then he starts shooting. He is moving, pausing, repositioning the actors, and moving some more. Technicians and writers gather just out of camera range, staring at an iPad that’s patched into Soderbergh’s camera via wireless, as the scene is sculpted and refined in real time. If you watch the screen, you can see aesthetic questions being asked and answered by the shifting positions of the actors in relation to Soderbergh’s lens. What is the point of this scene, this shot, this camera movement? Where is the best place to begin? On André Holland, who plays Algernon Edwards, the hospital’s acting chief of surgery? Or on Clive Owen, who plays Edwards’s onetime boss, the brilliant surgeon, medical inventor, and self destructive opium addict John W. “Thack” Thackery? Perhaps the first shot should both start and end with a close-up of medical instruments used in the procedure? Would that be repetitious? Okay, maybe the shot should end farther away from the actors, and then the next shot should pick up in close-up? Ah, yes, there we go, that worked. Much better. With its elaborately choreographed and composed long shots, this is the kind of scene that might take three hours to complete on network hospital dramas and even longer on Hollywood movies. Soderbergh knocks it out in less than two.

His direction of The Knick is unusual in pretty much every imaginable way, but let’s start with the fact that it’s all his: Soderbergh helmed the entirety of the show’s first ten-episode season, which aired late last year, and did the same for season two, which premieres on October 16. For all of its visual evolution in recent decades, TV is still a writer-producer’s medium where series directors rotate in and out as needed, rarely overseeing more than two or three episodes in a row. Occasionally one person might direct eight back-to-back episodes of a limited- run project like The Honorable Woman (Hugo Blick) or True Detective’s first season (Cary Joji Fukunaga). And once in a great while you’ll see the majority of a longrunning series directed by a single person, as with Louie (Louis C.K.)—but rarely on a show with as many moving parts as The Knick, and in such punishingly tight time frame. Soderbergh has now directed 20 hours of a lavish costume drama at the speed of a run-and-gun indie film: Both seasons wrapped, according to The Knick co-creator and co-writer Jack Amiel, in about 150 days, “which is less time than a lot of crews would spend shooting one big movie.” The Knick shoots eight to nine script pages a day, double the typical rate for a TV drama, and burns through an hour-long episode in just seven days, versus the industry norm of ten to 14.