Quentin Tarantino - Back In The Saddle With 'The Hateful Eight' 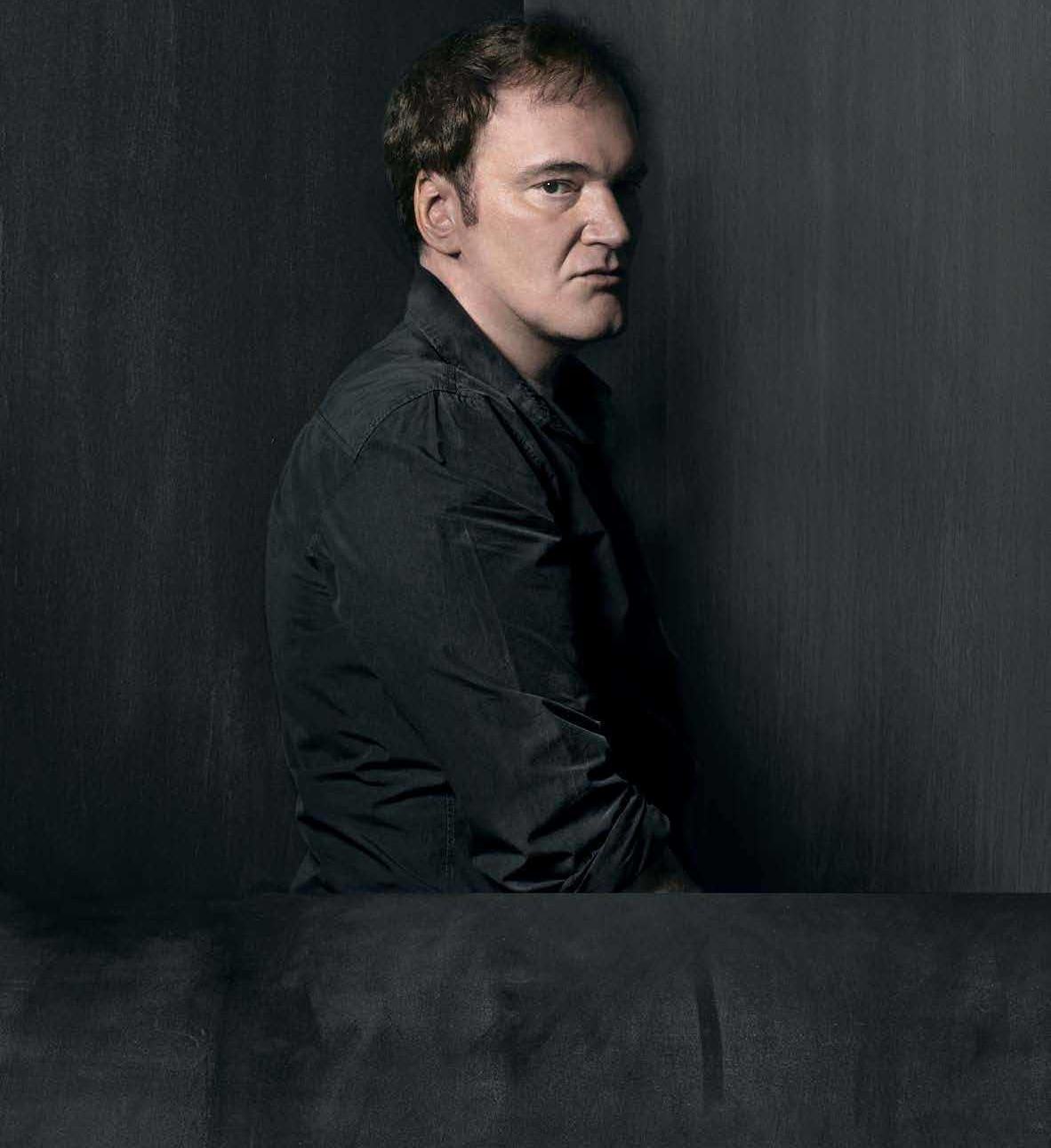 Midway through postproduction on his eighth movie, the Western 'The Hateful Eight' - about a band of outlaws trapped in a saloon during a blizzard - the director discusses the country's legacy of white supremacy, Obama, and why he doesn't worry about a Transformers future.

We’re five months from the release of The  Hateful Eight on December 25. How close to finishing are you?

We’ve got a little bit more than an hour finished right now. I just got back from seeing an hour of the movie cut together.

Are you happy with it?

I’m not committing suicide yet. It is what it is. We’re rushing and trying to get to the end. Then you go through it and try to make it even better. But first, you just get to the end.

Every movie I’ve ever done, there has always been some date we were trying to meet, whether it was with Reservoir Dogs, trying to meet the Sundance date, or Pulp Fiction, meeting the Cannes date. But we always pull it off. And this way you don’t have that situation where you finish the movie and then the people who paid to make it get to sit around and pick it to death.

So you don’t get notes from the studio anymore?

Is it different now, coming off Django Unchained and Inglourious Basterds? Those were the biggest hits of your career.2 Did that box office change things?

I don’t think so, as far as me telling the story I want to tell. But I learned a big lesson with Grindhouse,3 and I try not to repeat the mistake. Robert Rodriguez and I had gotten used to going our own way, on these weird roads, and having the audience come along. We’d started thinking they’d go wherever we wanted. With Grindhouse, that proved not to be the case. It was still worth doing, but it would have been better if we weren’t caught so unaware by how uninterested people were.

You’ve talked at various times about how,when you’re directing, you like to play your audience like a conductor does an orchestra.As time goes on and audiences become more sophisticated and accustomed to your style,does that become harder?

Frankly, sophisticated audiences are not a problem. Dumb audiences are a problem. But I think audiences are getting more sophisticated—that’s just a product of time. In the ’50s, audiences accepted a level of artifice that the audiences in 1966 would chuckle at. And the audiences of 1978 would chuckle at what the audience of 1966 said was okay, too. The trick is to try to be way ahead of that curve, so they’re not chuckling at your movies 20 years down the line. With Pulp Fiction, people were like, “Wow, I have never seen a movie like that before. A movie can do that?” I don’t think that’s the case anymore. I’m not talking ridiculously over anyone’s head anymore. I think people watched Django and Inglourious Basterds and thought they were really out there, but they got it. They felt themselves on solid ground. It wasn’t just, “What the fuck was that?” And people understand what I’m doing with genre. They’re not befuddled. They don’t think I’m doing it wrong. They get it.

Speaking of genre, what is it about the Western for you? There aren’t many being made right now.

There are a few coming out. Antoine Fuqua is doing Magnificent Seven, starring Denzel Washington, so that’s one. Django did so well I’m surprised that there’s not even more. One thing that’s always been true is that there’s no real film genre that better reflects the values and the problems of a given decade than the Westerns made during that specific decade. The Westerns of the ’50s reflected Eisenhower America better than any other films of the day. The Westerns of the ’30s reflected the ’30s ideal. And actually, the Westerns of the ’40s did, too, because there was a whole strain of almost noirish Westerns that, all of a sudden, had dark themes. The ’70s Westerns were pretty much anti-myth Westerns—Watergate Westerns. Everything was about the antiheroes, everything had a hippie mentality or a nihilistic mentality. Movies came out about Jesse James and the Minnesota raid, where Jesse James is a homicidal maniac. In Dirty Little Billy, Billy the Kid is portrayed as a cute little punk killer. Wyatt Earp is shown for who he is in the movie Doc, by Frank Perry. In the ’70s, it was about ripping the scabs off and showing who these people really were. Consequently, the big Western that came out in the ’80s was Silverado, which was trying to be rah-rah again—that was very much a Reagan Western.

So what is Hateful Eight saying about the 2010s?

Hateful Eight uses the Civil War as a backdrop, sort of like how The Good, the  Bad and the Ugly does.

The Good, the Bad and the Ugly doesn’t get into the racial conflicts of the Civil War; it’s just a thing that’s happening. My movie is about the country being torn apart by it, and the racial aftermath, six, seven, eight, ten years later.

I know. I’m very excited by that.

Finally, the issue of white supremacy is being talked about and dealt with. And it’s what the movie’s about.

How did what’s happening in Baltimore and Ferguson find its way into The Hateful  Eight?

It was already in the script. It was already in the footage we shot. It just happens to be timely right now. We’re not trying to make it timely. It is timely. I love the fact that people are talking and dealing with the institutional racism that has existed in this country and been ignored. I feel like it’s another ’60s moment, where the people themselves had to expose how ugly they were before things could change.I’m hopeful that that’s happening now.

You supported Obama. How do you think he’s done?

I think he’s fantastic. He’s my favorite president, hands down, of my lifetime. He’s been awesome this past year. Especially the rapid, one-after-another-after-anotherafter-another aspect of it. It’s almost like take no prisoners. His he-doesn’t-give-ashit attitude has just been so cool. Everyone always talks about these lame-duck presidents. I’ve never seen anybody end with this kind of ending. All the people who supported him along the way that questioned this or that and the other? All of their questions are being answered now.

Back to movies: Steven Spielberg and George Lucas have been pessimistic about the future of the film industry, worrying that if a few tentpoles flopped, it could cause the whole business to implode. Do you share their concern?

My pessimism isn’t about franchise filmmaking. That’s been going on since I was born. You can talk about Transformers now, but you could talk about the Planet of the Apes movies and James Bond4 when I was a little kid—and I couldn’t wait to see those. Actually, when we’re done here, I’m going to go see Guy Ritchie’s The Man From U.N.C.L.E. I don’t know why Spielberg and Lucas would be complaining about movies like that. They don’t have to direct them.

Some of their worry was for the smaller  movies that are being crowded out of theaters by blockbusters.

People say that every six years. We all agree that the ’70s—or the ’30s, depending on what you feel—is probably the greatest decade in cinema history, as far as Hollywood cinema is concerned. I think the ’90s is right up there. But people said what Spielberg is saying all through the ’90s, and they said it all through the ’70s.

So you’re not worried at all?

Not for those bullshit reasons you just gave. If you go out and see a lot of movies in a given year, it’s really hard to come up with a top ten, because you saw a lot of stuff that you liked. A top 20 is easier. You probably get one masterpiece a year, and I don’t think you should expect more than one masterpiece a year, except in a really great year.