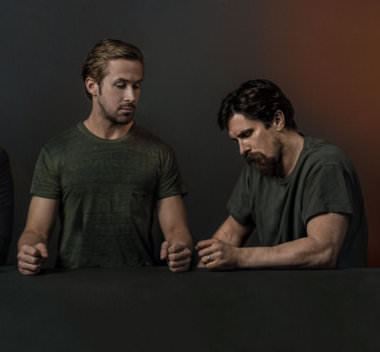 The pitchfork mobs didnt quite make it to Wall Street in 2008. So seven years later, the man who brought you Anchorman decided to give it another go with The Big Short.

"Can we get a shot of the napkin?” Adam McKay asked his director of photography, pointing toward the table where an uncharacteristically angry looking Steve Carell was seated, doodling fiercely. The cocktail napkin in question bore the name of Okada, the glitzy Japanese restaurant in the Wynn Las Vegas where New York hedge-fund manager Steve Eisman first encountered Wing Chau, a smug manager of collateralized debt obligations (investment vehicles composed mostly of home loans), in January 2007. It was Chau’s ignorance of the toxicity of these products that cemented Eisman’s belief that the housing market was doomed and ultimately persuaded Eisman to double down on his bet on its collapse, a bet that was later immortalized in financial journalist Michael Lewis’s best-selling book The Big Short.

Nearly ten years later, the scene between two once-obscure money managers was being reenacted, this time on film. For budget reasons, and because Okada had closed not long after the market crash, the scene was being shot at another casino, Harrah’s, in New Orleans. Set designers hadn’t gone so far as to re-create the restaurant’s 90-foot waterfall, but they’d done their best to conjure the atmosphere, with a toqued chef at a sizzling hibachi and authentic details like the cocktail napkins. Though that wasn’t why McKay wanted the shot. “He’s drawing out the CDOs,” the director explained, as the camera zoomed in on Carell sketching the financial product in a way that looked vaguely like Italian spumoni. “Any chance I have to illustrate this stuff, I take advantage of it.”

McKay, who resembles a taller, shamblier version of Waldo, as in Where’s, was seated in a red leather banquette behind the monitor, holding a megaphone that he would occasionally lift to offer direction in his laid-back California drawl. Even though it was a sweltering day in New Orleans, he was wearing a long-sleeved shirt and jeans, as the casino was roughly the temperature of a meat locker, the better to keep gamblers awake. This was just as well for the actors, to whom the language of high finance wasn’t coming easily. “Syth—synthetic CDOs,” Carell barked at Byron Mann, the actor playing Wing Chau, who was coolly spooning miso soup into his mouth as though he hadn’t done it 30 times in the past three hours.

Mann put down his spoon and smirked. “I assume no risk for these products,” he said.

There was a pause while the actors seemed to be figuring out what faces to make at each other. McKay lifted his megaphone. “You assume no risk!” he boomed. “That’s crazy! I think you can fuck with that more.”

Like the collection of derivatives Carell had finished sketching, The Big Short: The Movie is a very weird product—for starters, it’s a comedy about deadly serious things and a leftish movie lionizing hedge-funders. Nor is it a solid investment, not in these distractible, budget-minded, please-everyone times. As a package, it is composed of bets upon bets upon bets. There’s the bet that McKay, the director and writer best known for movies like Anchorman and Talladega Nights, and Steve Carell, also known as The Guy From The 40-Year-Old Virgin and The Office, can convincingly pull off a movie set in the world of high finance and that the other A-list actors playing the other “outsiders and weirdos” who saw the crash coming—Ryan Gosling as a version of Greg Lippmann, the slick Deutsche Bank trader whose body language swears he is lying, especially when he’s telling the truth; Brad Pitt as a version of Ben Hockett, an eccentric ex-banker who grows his own food; and Christian Bale as Michael Burry, a California doctor who, despite having only one functioning eye, saw the crisis before anyone else—will turn in performances worthy of the kind of attention that will (a) have made it worth lowering their fee and (b) cause the studios to pat themselves on the back for taking a chance on a worthy, artistic project instead of throwing up their hands and casting robots in everything.

Then there are the chancier bets: for instance, that this holiday season, Americans will put down their smartphones and tune in to a Hollywood version of Occupy Wall Street, a movie about an event that happened nearly a decade ago, one that they’d probably like to forget. And then there’s the riskiest tranche of all: the bet that those who do see it will come away with not just an understanding of what a CDO looks like but a fuller awareness of the cornucopia of shitty human behavior that led to the Biggest Financial Collapse Since the Great Depression and that it will cause them to reflect on those traumatic events, which have arguably never been properly processed despite their corrosive effects on our politics and culture and psychology. And that ultimately this experience will lead to some kind of reckoning that causes us to face uncomfortable truths about responsibility and financial capitalism and our entire way of life.

Oh, and that they’ll be entertained in the process.

Even Adam McKay, who structured this particular product with exactly those outcomes in mind, has a hard time telling anyone to put their money on that. “I’m hoping that would be the effect,” he says. “Like even if it just kicked the conversation a little bit, like if you just started hearing about it more because the movie comes out, and if it ends up doing well, that people in some of the debates would have to talk about it, that would be a huge victory. And if people were to actually get angry about it again, I would do backflips. But I don’t know if we can really hope for that.”

Back at Harrah’s, Carell shot out of his chair and spun toward the door of the casino. “Short everything that guy has touched,” he shouted to his character’s colleagues, who had been watching his interaction from a nearby table. Where was he going? “To find moral redemption,” he announced, stalking past the cameras and onto the main floor, where nary a slack-faced Southerner looked up from a slot machine.

In September 2008, Danny Moses, Porter Collins, and Vincent Daniel, staffers at Steve Eisman’s fund at FrontPoint Partners, sat on the steps of St. Patrick’s Cathedral and regarded the civilized world for what they felt sure would be the last time. Overnight, towering investment banks Bear Stearns and, later, Lehman Brothers had been declared virtually insolvent, having gambled away many, many times their own worth, and the entire global financial system seemed poised to follow suit. On television, political types were trying to bluff their way through the news shows, but only Hank Paulson, the Goldman Sachs CEO turned Treasury secretary, seemed like he really understood how bad things actually were. Pale and sweating bullets, he looked like he had just thrown up or was about to, and the three guys from FrontPoint could tell he was envisioning the same outcomes they were: no money coming out of the ATMs, rioting, looting, the end of capitalism. “Complete societal collapse,” Daniel said recently, sitting in the office of their new hedge fund, Seawolf Capital.