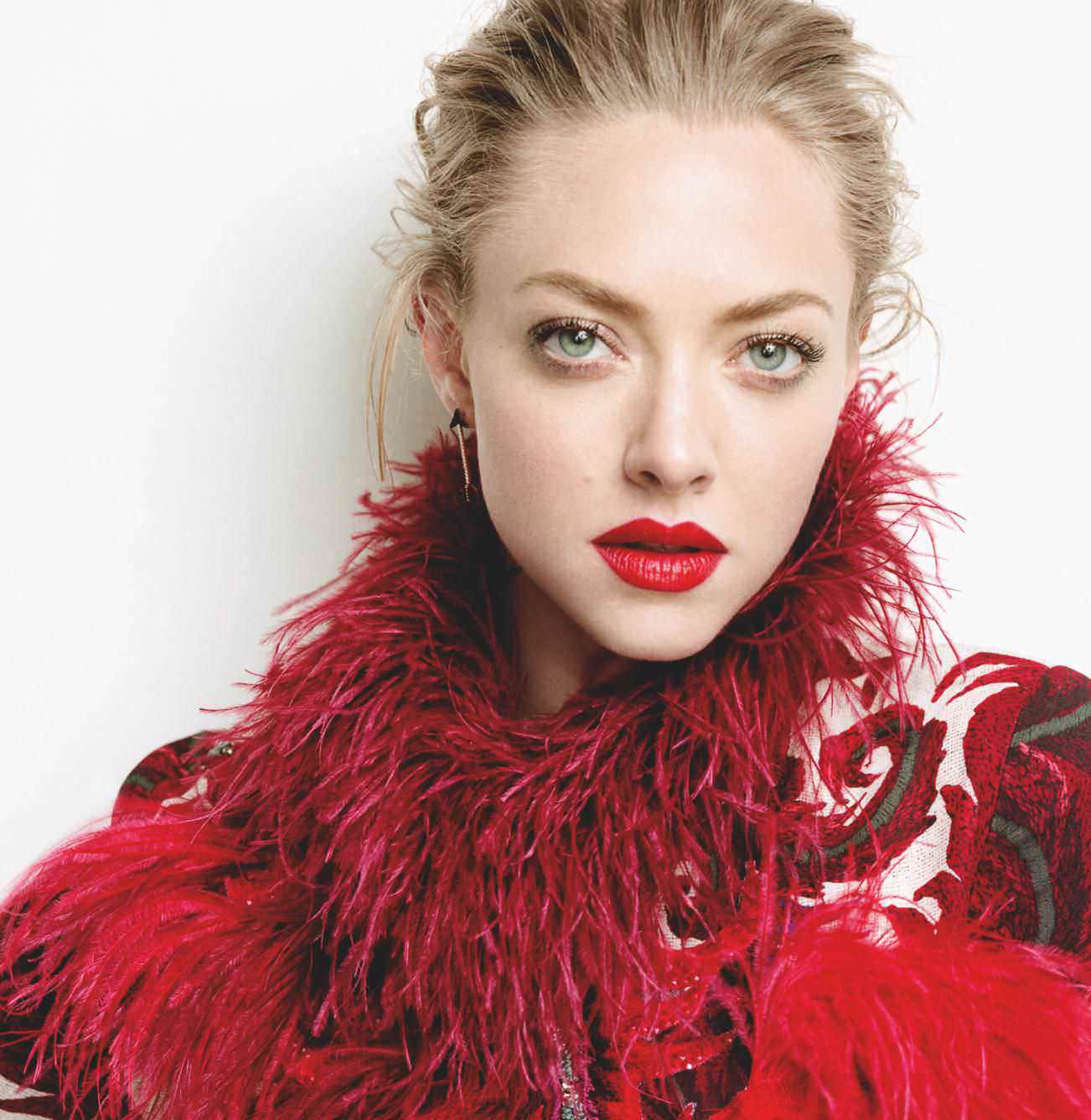 Hilarious, heartbreaking and brutally honest on screen - it's off camera that Amanda Seyfried will really knock your socks off. She talks therapy, fertility and feeling the fear (and doing it anyway).

The most fitting way to describe Amanda Seyfried today is quite simply, madly in love. She’s brought him along to our cover shoot in a spacious high-rise studio in Manhattan’s Meat packing District and is literally head over heels, bending down – in her towering metallic-pink Brian Atwood stilettos – to cup his face in her hands. She spoons jam into a tub of yogurt and feeds him using a coffee stirrer; he sits, watching her intently as she slips between outfit changes. It would all be rather disconcerting if the male friend in question wasn’t her five-year-old Australian Shepherd, Finn. Especially when he has a little accident while she’s in hair and make-up. ‘I need paper towels!’ cries Seyfried, tottering across the room in top-to-toe Versace. ‘I am so sorry!’

She needn’t apologise. While she may have had some high-profile relationships in the past decade (most notably Dominic Cooper, who she met on the set of box-office smash Mamma Mia! in 2007; more recently US comedy actor – and Drew Barrymore’s ex – Justin Long, who she’s been dating since 2013), it’s plain for all to see that Finn is Seyfried’s most enduring love. It’s entertaining to watch them in action, and sums up, tenfold, the appeal of the 29-year-old star who replaces Mila Kunis as the female lead in Ted 2 this month. An enchanting combination of the other-worldliness of Russian model Sasha Pivovarova (their likeness is uncanny – blame the wide-set eyes) and the goofy irreverence of Cara Delevingne – Seyfried is killing it on set today.

Once the shoot wraps, Seyfried strides over in jeans and flip flops to join me on the sofa. This is a day off for her, but she looks tired, because last night was the opening of her off-Broadway play The Way We Get By. Despite a 16-year acting career, it’s her first theatre role, so she’s feeling a bit rabbit-in-the-headlights. Her voice is raspy from the beginning of a cold, but after wolfing down a bowl of kale and quinoa that’s left over from lunch (and dropping it down on the floor for Finn to lick up the remains), she turns to face me, and starts to relax.

You’ve been refreshingly vocal in the past about battling anxiety. Is this play a form of therapy for you?

I realised the only way to truly evolve when you know you have issues is to walk through it all. [Stage fright] is a fear I’ve had for so long that it’s just… it’s kept me from enjoying so many things. The Oscars, live television. I used to have such an issue with talk shows that I wouldn’t be able to sleep. For months leading up to them I would get shortness of breath. It’s not a way to function, to fear things so much you miss the moment.

Are you seeing a therapist regularly?

Oh yes, completely. It’s coping with life. You go in and out of knowing how to cope with relationships or friendships. You think you’re doing the right thing, but it’s always nice to have someone say, ‘Have you tried thinking about it this way?’ I love advice. My dad came to stay with me a few weeks ago to go to a Mets [baseball] game and he gave me the best advice. I was like, ‘I’m so scared. I’m terrified I’m going to have a panic attack on stage.’ And he said, ‘Amanda! Has any fear you’ve ever had come true?’ and I’m like, ‘No,’ and he’s like, ‘So, enjoy it. If nothing else, enjoy it.’