This 16-channel AV processor promises to sound perfect in any room. Steve Withers pricks up his ears

Any company that christens its room correction system RoomPerfect must be confident it can live up to such a moniker. It’s right there in the name. Anything less than sonic perfection and you’re opening yourself up to a world of criticism. The MP-60, the new 16-channel AV processor from Danish manufacturer Lyngdorf, is designed to deliver exactly that: the perfect room.

Under the auspices of audio whizz Peter Lyngdorf, the company has been pioneering digital solutions to acoustic problems for decades – from the first Class D amplifiers to sophisticated room correction. The latter stems from years of research into compensating for the negative impact of a listening environment; four iterations and over eight million dollars later, the result is RoomPerfect.

Lyngdorf offers products ranging from digital amplifiers and CD players to speakers and subwoofers. The MP-60 is its new top-flight AV processor, although those who want to save themselves one-and-a-half grand, or simply don’t need 16 channels of processing, have the option of the 12-channel MP-50, which also benefits from RoomPerfect.

The MP-60's room correction prowess notwithstanding, it’s impressively specified: there's Dolby Atmos, DTS:X (the Pro version will be added via a firmware update in the summer) and Auro-3D decoding; balanced XLR outputs for 15.1 discrete channels; a host of connections; and plenty of high-end features. About the only audio format it doesn’t support is IMAX Enhanced DTS:X.

A gorgeous piece of industrial design, all sharp lines and Scandinavian cool, the MP-60 is fantastically well-made. The gloss and matte black finish is extremely eye-catching, and the large display is simple, clear and informative. Aside from a standby button and a source select knob, the only control on the minimalist chassis is a large volume dial that’s wonderfully granular in operation.

It's the kind of AV kit you really want on show, rather than hidden away in a rack – although that is an option. The good news is that if you do have it in the room with you it’s effectively silent, only needing basic ventilation rather than noisy fans to stay cool.

Lyngdorf's dedicated remote control is as sleek and stylish as the processor itself. It's a slender wand that's intuitively laid out, and offers a choice of IR or RF control, which is a nice touch. There’s no backlight, though. The MP-60 is primarily aimed at the custom install market and supports systems such as Control4, along with a web-based interface. 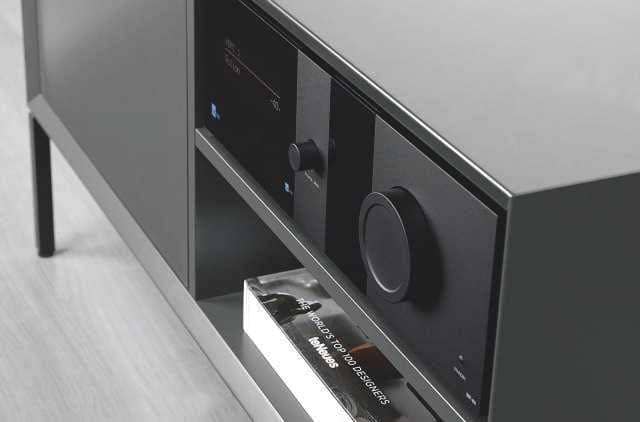 For those married to their smart devices, there's a remote app that provides basic functions like input selection and volume level, along with direct control of a built-in media player. There’s also support for Spotify, vTuner and AirPlay, with Roon to be added soon.