UP FOR A NEW CHALLENGE

Wits vice-chancellor Adam Habib is swopping SA for Britain at the end of the year. It will be tough, he says, but it’s the right thing to do

HE STRIDES purposefully into his office, apologising for running late. His students were protesting about lack of accommodation and he had to go and address them, Professor Adam Habib explains.

Another day, another problem to sort out – as vice-chancellor of Wits University, it comes with the territory.

“My wife, Fatima, complains about the fact that I’m always on the phone,” he says as he settles into a couch in his office on the campus in Braamfontein, Johannesburg.

But from the end of the year it will be up to someone else to answer late-night phone calls and think of diplomatic ways to negotiate with angry students. After seven years at the helm, Adam (54) is planning to step down and move to London to become a director at the School of Oriental and African Studies (SOAS).

It’s going to be strange living in another country, he admits, and he’s going to miss South Africa but he’s convinced he’s made the right decision.

With his second term as vice-chancellor due to end in 2022, he would have been forced to step down anyway as university rules permit only two terms.

“I didn’t want to retire in my mid-50s so it was a logical thing,” Adam says.

HE ARRIVED at Wits in 2013 knowing it was one of the most important institutions in the country, but nevertheless there were times when he was surprised at how intense his job turned out to be.

“We didn’t anticipate that in my tenure we’d have the largest student protest post-1994.” 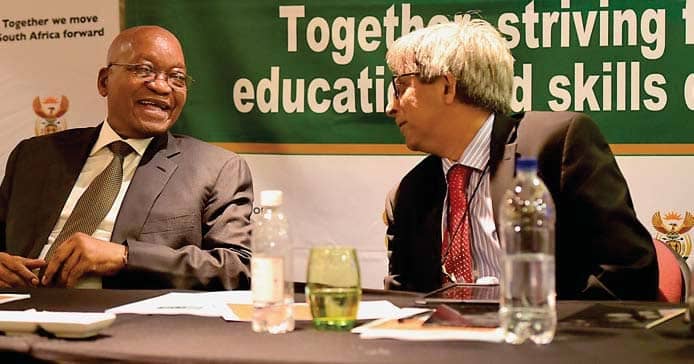 To this day Adam, a former anti-apartheid activist, regards calling in the police to contain a #FeesMustFall protest in 2016 as the hardest decision he’s ever had to make. But he had no choice: in a poll conducted at the university the majority of students had voted in favour of classes resuming, and a small number were preventing this from happening.