OUR PAIN ISN'T A JOKE 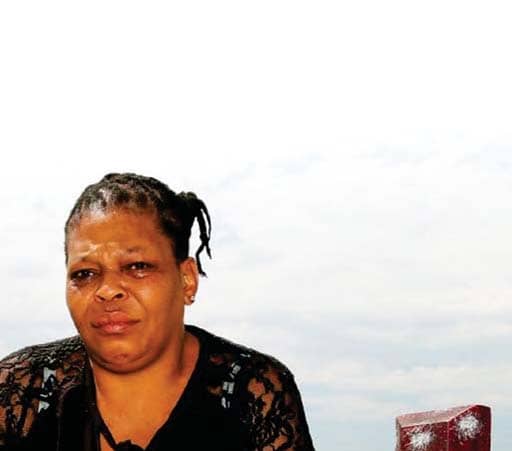 THE red crosses dotting Motherwell cemetery stand out among the many grey gravestones, but it’s not easy to find Nokuthula Mjekula’s grave.

The mom of five was laid to rest in 2016 but the recent revelation that she’s still alive, and that an unknown woman was buried in her place, left her loved ones reeling.

And instead of celebrating her return, Nokuthula (41) is battling to settle back into her community.

“Who can live a normal life when there is a grave with their name on it?” she says.

Nokuthula’s “resurrection,” has brought insults from superstitious neighbours and fearful children calling her “zombie” and “ghost”. She became a cruel joke when her grieving g mother was shown on SABC1’s Cutting Edge, wailing her daughter’s name.

In fact, her name became a hashtag and DJ Maphorisa cashed in on the hash-htag with a remix of Phoyisa, featuring the gogo calling out, “Nokuthula!”

Nokuthula vanished from her home in Motherwell, Port Elizabeth, on 26 August 2016, leaving behind her four children (now 15, 13, 7 and 5) with her family.

Her family last saw her that day before they left for a funeral in Peddie, nearly 190km away. Neighbours who saw Nokuthula leave said she told them she was going to Cape Town, where she’d lived previously – but she hadn’t mentioned any travel plans to those close to her.

Her family reported her disappearance, then – for two agonising weeks – lay awake at night, terrified at what might have happened to her, recalls Nomahomba.

When police contacted the family to say they found the body of a murdered woman in NU8 in Motherwell, it was the start of a nightmare. The family were asked to identify the corpse of a woman whose face had been burnt beyond recognition. She had scars on her arm and leg, similar to scars

Nokuthula had after being in a car crash. Her family was certain they’d found their missing loved one. They were shaken and decided they couldn’t wait for DNA tests to confirm if it was her, Nomahomba says.

Nokuthula Mjekula was believed to be dead. She even has a grave in Mother well in the Eastern Cape.