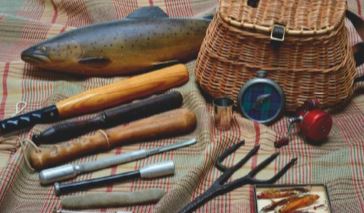 To ‘hook and cook’, you need a priest to administer the final coup de grâce.

THE priest is summoned more rarely now than in days of yore. This is not a lament about our secularised society—I’m referring to that tiny billy club, baton or bludgeon used for humanely dispatching a fish, euphemistically named a ‘priest’ as it administers the last rites.

Once, we blithely tapped most wild salmonids on the head and although—in these years of dearth —I’m not advocating a return to the status quo ante, I’m also no fan of mandatory catch and release. In fact, I wonder whether we have a right to interfere with the innocent lives of fish if we have no intention of ever retaining one for the table. Coarse anglers will disagree, although attitudes are different on the Continent.

Anyway, if you’re still intending to ‘hook and cook’, you must equip yourself in advance with a suitable instrument for the coup de grâce and not improvise with a stone. It’s part of the ritual for me to carry a priest. One hostess even issued me with a biretta and golden censer, to maximise the Rev Prof’s piscicidal mindset.