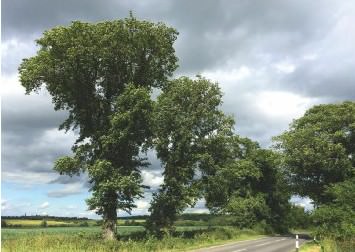 Once upon a time, elm trees were a common sight in the English countryside. Mark Seddon offers a solution for their return.

THEY are, perhaps, some of the best-kept arboreal secrets in England. Huge, mature elm trees, their outline a sudden and thrilling surprise, billowing like thunderclouds above the hedges of a few scattered villages in Huntingdonshire, Cambridgeshire and East Anglia. In Steeple Gidding and Boxworth, but, above all, in the Cambridgeshire village of Abbots Ripton, the elm, quite remarkably, is still king.

The English elm was, for the most part, wiped out 40 years go by Dutch elm disease, yet, here in Abbots Ripton, there are hundreds of mature, stately elms. Those dusty summer lanes in the heart of England that were half-black shadow, half-tattered sleepy sunlight among the cobwebs, nettles and leafy elm shoots that Gerald Wilkinson mourned in his 1978 Epitaph for the Elm are all around me. It’s as if I’ve become a traveller in time. There are whole rows of huge hedgerow elms, as well as woods thick with leafy, luxuriant examples of all ages.

These remarkable survivors are not, however, English elms—they’re small-leaved elms, sometimes known as East Anglian elms. There are believed to be at least four subspecies, which rather complicates the Latin names attached to them. Ulmus minor appears to be the favourite, but this is likely to spark heated debate among elm buffs.