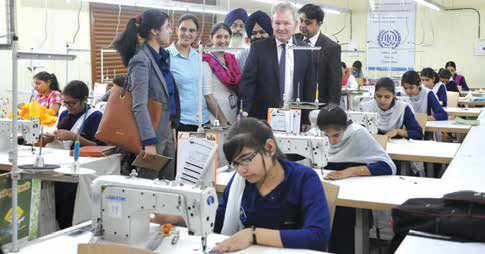 Since the launch of Skill India Mission, how much National Skill Development Corporation (NSDC) has achieved so far as per its vision?

The Skill India Mission was launched in July 2015 to expedite government’s effort in providing skill training to the youth. With a mission to position India as the skill capital of the world, the Skill India Mission was instituted to expand the scale and reach of the initiatives effectively. So far, over 1.24 crore people have received training through various programmes.

The National Skill Development Corporation (NSDC), under the aegis of the Ministry of Skill Development and Entrepreneurship (MSDE) has collaborated with industries, corporate houses, states, government bodies as well as other ministries to ensure its effective implementation.  As on December 2017, over 19 lakh candidates received skilled training under PMKVY 1 and another 14 lakh has been trained in its second phase till now. Further, over 5 lakh skilled workforce has received formal certification under the Recognition of Prior Learning (RPL) component of PMKVY. The government has also established 200+ state-of-art pradhan Mantri Kaushal Kendra (PMKK) and another 250 such centres are in pipeline. The government plans to have one such centre in every district of India.

Also, India International Skill Centers (IISC) have been set up for people who wish to work in foreign countries. The NSDC helps them hone their skills as they embark on undertaking job opportunities in another country. We are planning to establish 100 such centres across the country.

There has been an added emphasis on promoting entrepreneurship among country’ youth under PM-YUVA scheme.

NSDC is being set up to implement Skill India Mission. What are the challenges faced by the mission? What strategies are followed by NSDC to overcome those challenges?

India boasts of a huge demographic dividend and has the second largest workforce in the world. However, with the improvement in technology, automation has taken over most of the labour oriented jobs, which makes it necessary to up-skill and re-skill the work force all across the globe. At the same time it is very important to bridge the gap between skill training and job opportunities available. This gap is hampering the recruitment of even suitably trained candidates in an industry.