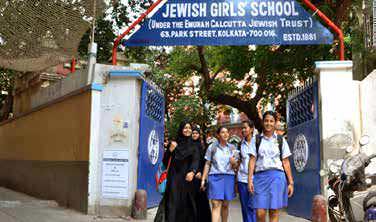 The swelling ranks of Muslim girls in the Jewish school offer a glimpse into the deep ties between Calcutta's Muslim and once-thriving Jewish community.

When Mitana Alexander bid goodbye to Calcutta's Jewish Girls School in 1975, she was its last Jewish student. The bulk of the others were Muslims. But it was not the steady influx of Muslim girls in the preceding two decades that moved Alexander's parents to take her out of the school, she says. They were worried because she was the last remaining occupant of a Jews-only dormitory, as most Jewish girls they had known had migrated to Israel, America or Europe "with their folks." "They (school authorities) had to retain a matron just for me," recalls Alexander, now aged 50. "I would be alone in the dormitory at night and my parents started panicking. Muslims had nothing to do with my leaving."