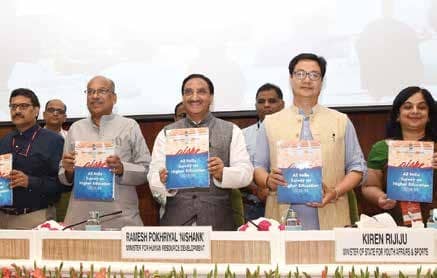 At a central advisory board of Education (CABE) commit-tee meeting convened on September 21 to deliberate the 484page National Education Policy 2019 (NEP) draft report of the K. Kasturirangan Committee (released for public debate on May 31), the Union HRD ministry took time off to release the All India Survey on Higher Education (AISHE) 2018-19 report titled Higher Education Statistics and Public Information System.

AISHE was initiated in 2011 to provide data for evidence-based policy formulation and effective planning in higher education. With the NEP 2019 in the final phase of preparation, the latest AISHE statistics offer important insights into the feasibility of the far-reaching reforms suggested for higher education in the draft NEP. Among the KR Committee’s proposals is division of higher education institutions into multidisciplinary research universities, traditional teaching universities and colleges, and to raise gross enrolment ratio (GER) in higher education from the current 26.3 to 50 percent.

According to AISHE 2018-19, India has 993 universities of which 385 are privately managed and 16 are exclusively for women. There are 548 general, 142 technical, 63 agriculture & allied, 58 medical, 23 law, 13 Sanskrit and nine language universities with the remaining 106 falling into other categories.

AISHE 2018-19 pegs the number of undergrad colleges in the country at 39,931, with Bangalore urban district hosting 880 followed by Jaipur (566). College density or the number of colleges per lakh eligible population (in age-group 18-23) varies from a mere seven in Bihar to 53 in Karnataka against the national average of 28. Significantly, 78 percent of undergrad colleges are private (aided and unaided) institutions tutoring and mentoring 66.4 percent of all students in higher education.

MORE STORIES FROM EDUCATIONWORLDView All