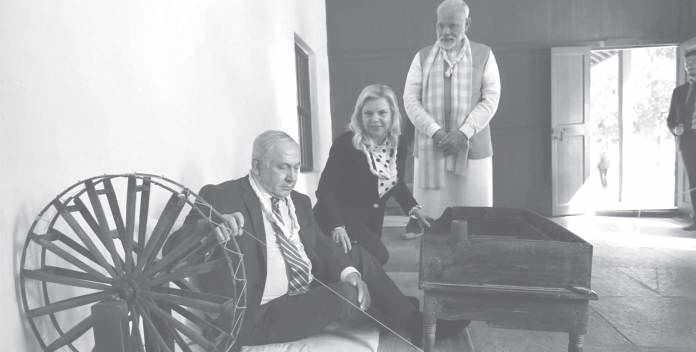 Israel’s Prime Minister Benjamin Netanyahu visited India on a six-day visit during the first week of January 2018. This is the second visit to India by an Israeli Prime Minister since the two countries established diplomatic ties in January 1992. The two countries are celebrating 25 years of friendship, and collaborating on a spectrum of areas.

This visit is seen as the dawn of a new era in the wonderful friendship between India and Israel. It began with the historic visit of Prime Minister Modi in Israel, who created great enthusiasm and continues with Israel Prime Minister Benjamin Netanyahu here. It will help to further nurture our societies, will bring growth, peace and progress to both people.

Two aspects of the visit are particularly remarkable. First the Israeli Prime Minister decided to invest so much time, effort, energy and commitment to its relationship with India is indeed exceptional.

Second, the visit came a little more than six months after the momentous and path-breaking visit by Prime Minister Modi to Israel in July 2017.

Counter-terrorism, security, defence, cyber-security, agriculture, innovation, water management, films, people-to people contact and so on are some of the significant areas in which relations between the two countries can grow rapidly.

MoU on Cyber Security Cooperation between India and Israel

Agreement on Film-co-production between India and Israel

MoU between the Central Council for Research in Homeopathy, Ministry of AYUSH and the Centre for Integrative Complementary Medicine, Shaare Zedek Medical Center on Cooperation in the field of Research in homeopathic Medicine

Memorandum of Intent between Invest India and Invest in Israel

Letter of Intent between IOCL and Phinergy Ltd. For cooperation in the area of metal-air batteries

Relations between the two countries have been expanding across a variety of sectors in a robust manner for 25 years now.

It is however inconsistent that despite the rapidly expanding ties; exchange of visits at the highest political level did not take place.

Before the National Democratic Alliance (NDA) government took power in 2014, the only presidential visit from Israel was that of Ezer Weizman in 1997, which was followed by Prime Minister Sharon’s visit in 2003. All that changed with Modi’s assumption of power. A spate of visits both ways has been witnessed over the last three years.