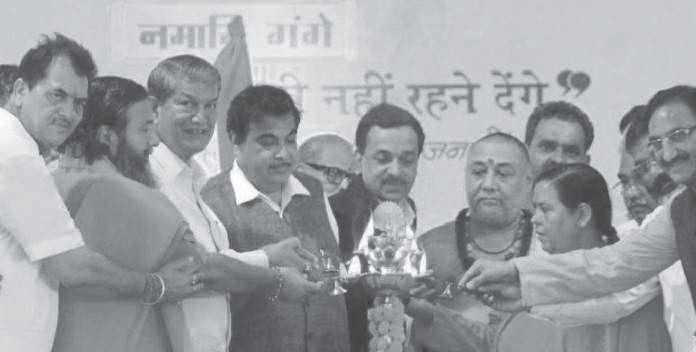 Under this, the villages will be developed as model villages by developing sustainable sanitation infrastructure and cleanliness practices. In the first phase government has started the Ganga Gram initiative in 306 villages. The Ministry of Drinking Water and Sanitation (MDWS) launched ‘Ganga Gram’ – a project for sanitation based integrated development of all 4470 villages along the River Ganga.

With the aim of cleaning and rejuvenating the Ganga river through active participation of rural population, National Mission for Clean Ganga (NMCG) had organised ‘Swachh

So far, in collaboration with Ministry of Drinking Water & Sanitation, 33% Individual House Hold Latrine (IHHL) have been completed out of targeted 15,18,649 IHHL in 4292 villages of 5 stem States. This is ongoing programme under Swachh Bharat Mission (Gramin).

Seechewal Model of Sanitation Programme NMCG, under its Ganga Gram project, facilitates exposure visit to Gram Pradhans/Sarpanch of all villages situated along the main stem of River Ganga.

The program envisages sensitizing all Gram Pradhan / Sarpanch to the successful village wastewater management system operational at Nirmal Kuteya, Village Seechewal, Jalandhar, Punjab. The objective is to extend first-hand experience with learning through personal interaction so that the same can be replicated at their respective village.

So far 310 Gram Pradhan from four States (UP, UK, WB and Jharkhand) have been participated in this program.

The Ganga Gram initiative would help in the river Ganga rejuvenation process by :