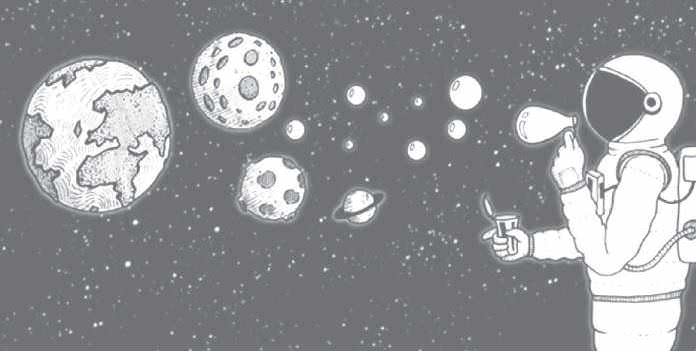 New Theory of the Universe Formation.

The scientists have been made many significant discoveries to know about the origin of the universe, but they are still unsure about it. There are many theories which have explained the birth process of the universe. Well, now one new theory has been added to the list of existing theories.

As per the new research, the universe has formed in the wind-blown bubbles around a giant, long-dead star which was 40-50 times the size of the sun. The new theory named as the Bubble theory was formulated by the scientists of the University of Chicago. The theory states that the solar system formed billions of years ago near a supernova.

What is Big Bubble?

The Bubble Theory arises from the nature of cosmic inflation, which views the universe having expanded exponentially in the first tiny fraction of a second after the Big Bang. In this scenario of the ‘multiverse’ concept, some parts of space-time expanded faster than others. This created ‘bubbles’ of space-time. Each bubble contained a vacuum simmering with energy (variously called dark energy, vacuum energy, inflation field, or Higgs field).

The energy caused the bubbles to expand. Inevitably, some bubbles collided with each other. It’s possible that secondary bubbles were produced as well.

Each of these bubbles was a universe in its own right. The various bubbles developed into universes different from one another. The bubble that created our universe has its own laws of physics, while the other bubble-universes could have different laws.

The previous theory about the formation of the Universe, the Big Band theory informed that it was the big bang event which had happened around 10 to 20 billion years ago formed the solar system. All other things like time, energy, matter and the space in the universe were created during the time of the big bang.

The theory informed that the explosion thrust matter in all directions and that expanded the space. When it started to cool, the material in it had started combined together, and from that galaxy, planets and stars were generated.

But the nee bubble theory has given some different fact about the origin of the solar system.

The formation of the universe is related to the Wolf-Rayet star, a giant star. It is 40 to 50 times bigger than its own sun.

When the Wolf-Rayet star drops its mass, the stellar wind plows through the material that was around it. Then it formed a bubble structure with a dense shell.