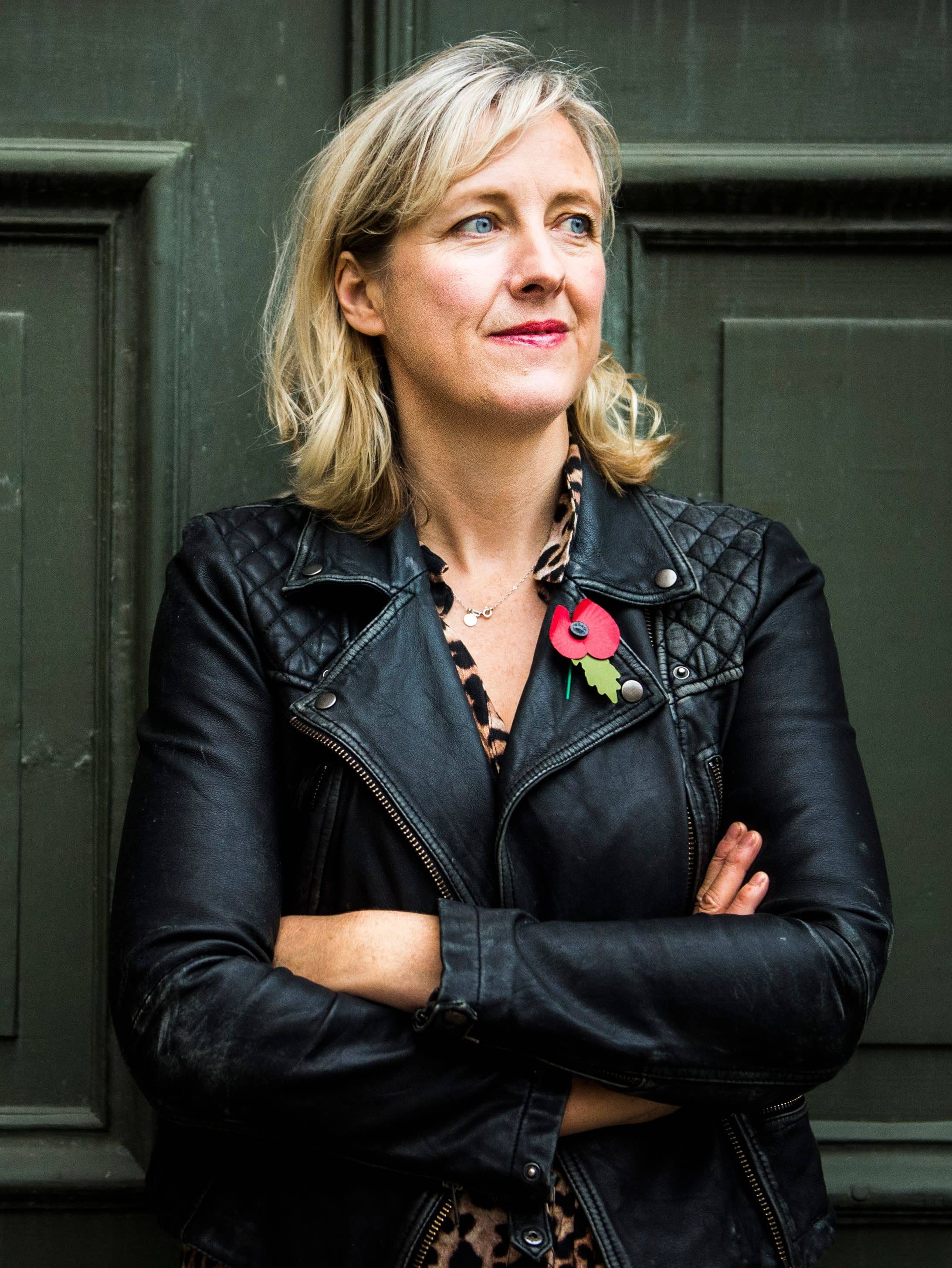 In the imaginations of her detractors, Carole Cadwalladr’s apartment, in North London, should be empty, except maybe for a wall outfitted with corkboard and covered in news clippings about Mark Zuckerberg and Alexander Nix, the CEO of the now-defunct targeted-advertising firm Cambridge Analytica. But Cadwalladr, I was happy to discover, lives in an elevated row house set in a charming brick complex. On the April afternoon I was there, I saw a small balcony brimming with untamed plants, a bright yellow Smeg refrigerator in the kitchen, and a vintage poster advertising Lucky Strike hanging on a wall. Still, there was evidence of the indefatigable reporting life behind her work for The Observer, the Sunday edition of The Guardian: on a table was a copy of How to Lose a Country: The 7 Steps from Democracy to Dictatorship, a new book by a Turkish journalist named Ece Temelkuran.

Cadwalladr is forty-nine and tall, with wispy blond hair, her style a mixture of femininity and rebelliousness; she often wears a black leather jacket over a flowy top. When I entered her home, she offered me tea. Then she begged my pardon; her throat was sore and her voice was nearly gone. She’d delivered a speech the night before at the National Press Awards, where she’d accepted the title of Technology Journalist of the Year. “I do a lot of events,” Cadwalladr said. “This is the only time I’ve ever been jeered.”

Given the opportunity to address her peers, most of whom were working for proBrexit papers, she’d been seized by a desire to provoke them. The previous week had been Britain’s deadline, foreseeably missed, to leave the European Union; thanks in part to Cadwalladr’s reporting, the official Vote Leave campaign had agreed to pay a fine in response to charges that it had broken election law in its pro-Brexit spending. From the podium, Cadwalladr told her colleagues that they now knew the Brexit vote had not been free or fair. “And they were like, ‘Yes, it was!’ ” Cadwalladr mock-shouted. She laughed, sounding hoarse.

Cadwalladr’s journalism, her combination of assiduous investigation and prolific output, has earned her a reputation as something of an instigator, a role she publicly embraces. In conversation she is chatty, personable, and kind; her online persona, however, is more combative. On Twitter, she slings fireballs at her critics, who include powerful figures in politics, business, and Silicon Valley. She has a stubborn idea of justice, and will frequently reach out to writers, editors, or anyone else she believes has engaged with her or her work unfairly or used a sexist trope. To some, that makes her grating, though it is difficult to imagine a male journalist eliciting the same reaction. To others, she’s frustrating simply because she’s right.

Cadwalladr has written for The Observer since 2005, tackling everything from food waste to the effects of “smart drugs” to Adele and Marilyn Manson. She has always had a particular curiosity about the promises of new technologies, as well as their off-label potential. And then, at the end of a long 2016, she began devoting the weekly space allotted to her to a series exploring how social media platforms, especially Facebook and Google, had been negligent bordering on malicious with regard to their amassed power and resulting democratic responsibilities.

She writes—as Sarah Donaldson, her editor at The Observer, remarked to me—as she speaks, in chatty, playful prose replete with rhetorical questions and personal reflections, in a way that feels intimate: a reader of Cadwalladr’s may feel that she’s joining a quest inside the author’s mind. Her background is in feature writing, rather than investigative reporting, which means that her dissections of tech platforms make use not of the seemingly neutral and omniscient style that often characterizes tech journalism, but rather her singular voice. “We are the bounty,” she wrote in 2017. “Our social media feeds; our conversations; our hearts and minds. Our votes.”

Cadwalladr’s recent work has traced the arc of popular understanding about interference in British and American electoral processes by foreign actors. Before Brexit, there had been two articles about Cambridge Analytica’s use of breached Facebook data that received little attention; Cadwalladr first mentioned it in a piece about Robert Mercer, the hedge fund tycoon, in February 2017, and was followed about a month later by Jane Mayer, who published an investigation of Mercer in The New Yorker. Up to that point, these stories represented the most extensive coverage of the subject, detailing Mercer’s substantial donations to Donald Trump’s 2016 campaign and noting that he had invested millions in Cambridge Analytica—a firm that had worked on campaigns supporting Trump and Brexit by using data to wage “political and psychological warfare.”

An acquaintance of mine who holds a high-level position at Facebook in Europe said that she had remained unfamiliar with the name Cambridge Analytica until the spring of 2018, when Cadwalladr broke the story that the firm had used data from fifty million breached Facebook profiles. The news was published as an interview with Christopher Wylie, a data consultant for Cambridge Analytica whom Cadwalladr had spent a year persuading to become a whistle-blower. The Observer ran the interview in consortium with the New York Times (where Cadwalladr’s byline appeared along with Matthew Rosenberg’s and Nicholas Confessore’s) and the British television station Channel 4, in order to garner international attention. The story unleashed a resounding international response and incontestably altered public perception of Facebook across Europe and the United States.

A week later, Cadwalladr published a second whistle-blower article, this time focused on Britain and Brexit, featuring an interview with Shahmir Sanni, a former campaign volunteer for Vote Leave. The Sanni story, which detailed how the Vote Leave campaign intentionally flouted spending limits, and thus broke the law, should have led to swift political and public consequences. But it fell flat, largely because, for more than a year, other British media declined to pick it up (Cadwalladr speculates that papers with a proBrexit slant were disinclined to question the outcome of the vote). If the American press is increasingly entrenched on opposite sides of an impassable chasm, the British press, Cadwalladr claims, is worse. Much of the British print media is immovably right-wing because of Rupert Murdoch’s empire, whose holdings in the UK include The Sun, The Times, and the Sunday Times. “One of the biggest failings was the fact that the BBC didn’t report it,” Cadwalladr said. “If it doesn’t happen on the BBC, it doesn’t happen in Britain.”

As we sat in Cadwalladr’s kitchen, Chris Wylie texted her: “we need to fucking stop this bullshit.” He’d just found out that Alexander Nix would be speaking publicly for the first time since the Cambridge Analytica revelations—at the Cannes Lions festival, in the South of France. (He later canceled the appearance.) During the year prior to Wylie going public, Cadwalladr had sometimes spent two hours per day on the phone with him. Now she put her phone away. “Should we go for a walk?”

We headed out with Meg, her aging collie–golden retriever mix. Cadwalladr’s neighborhood is modest in appearance but sits adjacent to the city’s largest private home, a Georgian Revival manor called Witanhurst, which in 2008 was sold to a holding company belonging to a Russian oligarch for fifty million pounds. Highgate, the area around Witanhurst, is flush with Russian money (along with Kate Moss’s and Jude Law’s). Near Cadwalladr’s complex and the oligarch’s sits the cemetery where Karl Marx is buried.

Striding ahead, Cadwalladr took me past Witanhurst, then turned with Meg down a driveway blocked off by a red-and-white striped barrier, the word private painted across the pavement in large white letters, as she detailed the fallout from her reporting on Cambridge Analytica. “The multiplicity of my enemies is quite something to behold,” she called back to me as I straggled behind. Google and Facebook had both threatened to sue The Guardian; Nix had become an adversary, as had Julian Assange.

After twenty minutes of walking, we arrived at our destination: a school-like brick building that, Cadwalladr said, once bore a sign labeling it as the Russian defense attaché’s office. By now, Robert Mueller, the US special counsel, had indicted thirteen Russians for their role in the social-media-catalyzed chaos that seized America. Cadwalladr told me that, since the Skripal poisoning—in 2018, when Sergei Skripal, a former Russian military intelligence officer and double agent, and his daughter Yulia were mysteriously poisoned with nerve gas in a small city in southwestern England—some residents of the building before us had been expelled from the country and the building’s sign had been taken down. Now the only marking on it offered a number to call for deliveries. “It’s basically a nest of spies,” Cadwalladr said.