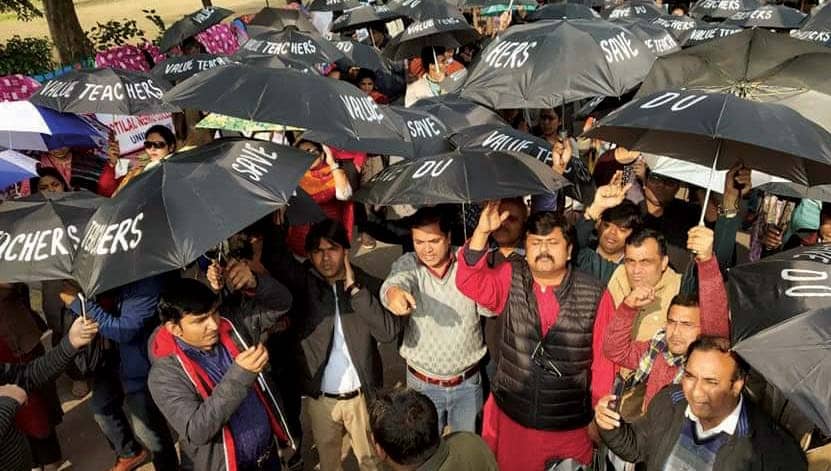 What does having thousands of ad hoc appointments mean for a public university, its teachers and students?

In 2013, Rakesh and his wife joined Delhi University as ad hoc teachers to gain experience before trying for a permanent post. Seven years later, they still continue to work on ad hoc basis. “We thought we would become permanent soon, but no interviews have been held for the last 10 to 12 years,” says Rakesh.

They are just two among thousands working in the university as ad hoc teachers and they have been a near-permanent feature of Delhi University for more than a decade. And for the past three months, they have been on protest outside the Vice-Chancellor’s office, demanding “absorption” into the university system as permanent teachers.

Recruitment against permanent vacancies has been negligible during this period. In the last round of permanent appointments, made in 2015-16, just around 700 teachers were recruited against over 5,000 vacancies. On February 29, Amit Khare, Secretary, Ministry of Human Resource Development, speaking at a DU college, said he has had “detailed discussions” with the DU VC and asked him to take steps to fill up the vacancies at the earliest. However, he did not elaborate on these steps.

Delhi University has around 12,000 teaching posts of teachers in its various colleges and centres. The DUTA estimates there are around 5,000 ad hoc teachers in the university.

The service conditions vary for each of these categories of teachers. Permanent teachers enjoy full salaries and benefits. “The salary of an ad hoc teacher is the entry level payment of any permanent teacher without any perks or increment,” said Devesh Biswal, an ad hoc assistant professor at Satyavati College. They are also not entitled to dearness allowance (DA) or travel allowance (TA) either and their salaries remain the same for years.