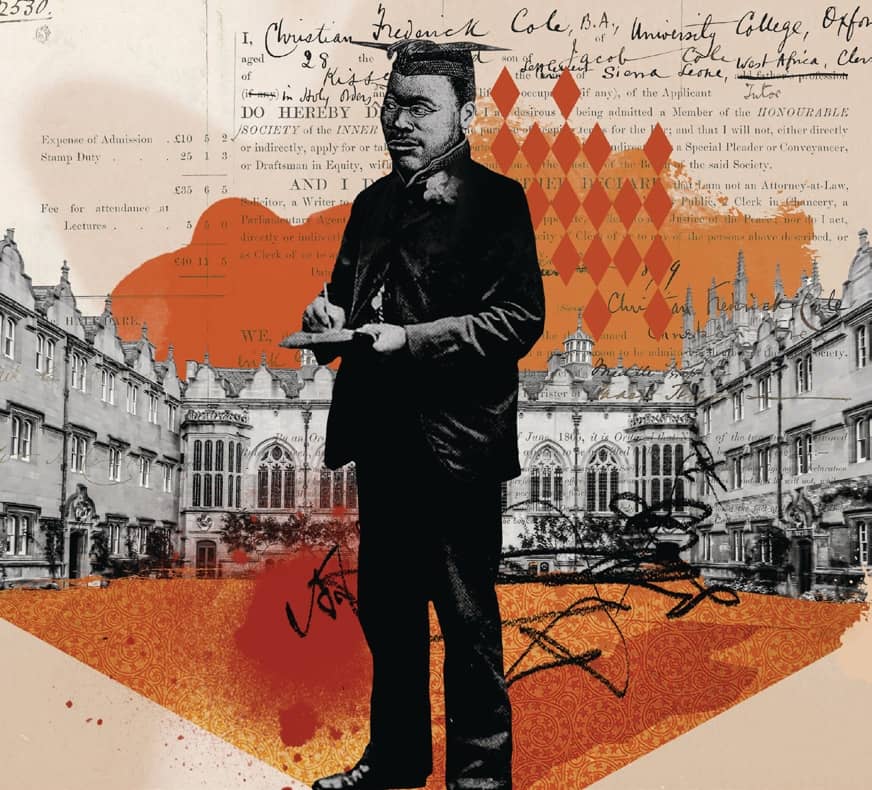 Born in rural Sierra Leone in 1852, cole fought his way to oxford university and qualified as England’s first black barrister. Pamela Roberts applauds a singular character who took on some of the west’s most entrenched institutions – and won

“Mute astonishment was excited a few days ago in the London Bankruptcy Court, by the appearance there, briefs in hand, with work to do, of a gentleman of colour – of the darkest tint. He was received by all the other members of the bar with the courtesy which might be expected from English gentlemen. His address to the learned recorder, Sir Thomas Chambers, for mercy towards a young offender against the law, showed an unusual command of ‘the tongue that Shakespeare spoke’, felicity of expression, good taste and intellectual force.” Thus ran a document from 1883 introducing England’s first black barrister, Christian Frederick Cole.

Cole was born in the village of Waterloo, in the British colony of Sierra Leone, in 1852. His parents – Jacob, a reverend, and May Cole – were described as “a negro and negress of the purest type”. They obtained their son a scholarship to attend the oldest western-style college in sub-Saharan Africa, Fourah Bay College in Freetown, which was known as the ‘Athens of West Africa’ for its high standards in Latin and Greek.

At Fourah Bay, Cole had a role model in the school’s principal, Reverend Edward Jones, who had been the first African-American to graduate from the US’s Amherst College. He encouraged Cole to apply for one of the world’s most prestigious universities: Oxford. Cole’s bid wasn’t unprecedented – another Fourah alumnus, Africanus Horton, had become one of the first black graduates from a British university when he’d earned a medical degree from Edinburgh in 1859 – but it was audacious. Nevertheless, Cole applied and was accepted after passing ‘Responsions’ – exams in Greek, Latin, arithmetic and algebra.