Weapons of the Ancient World 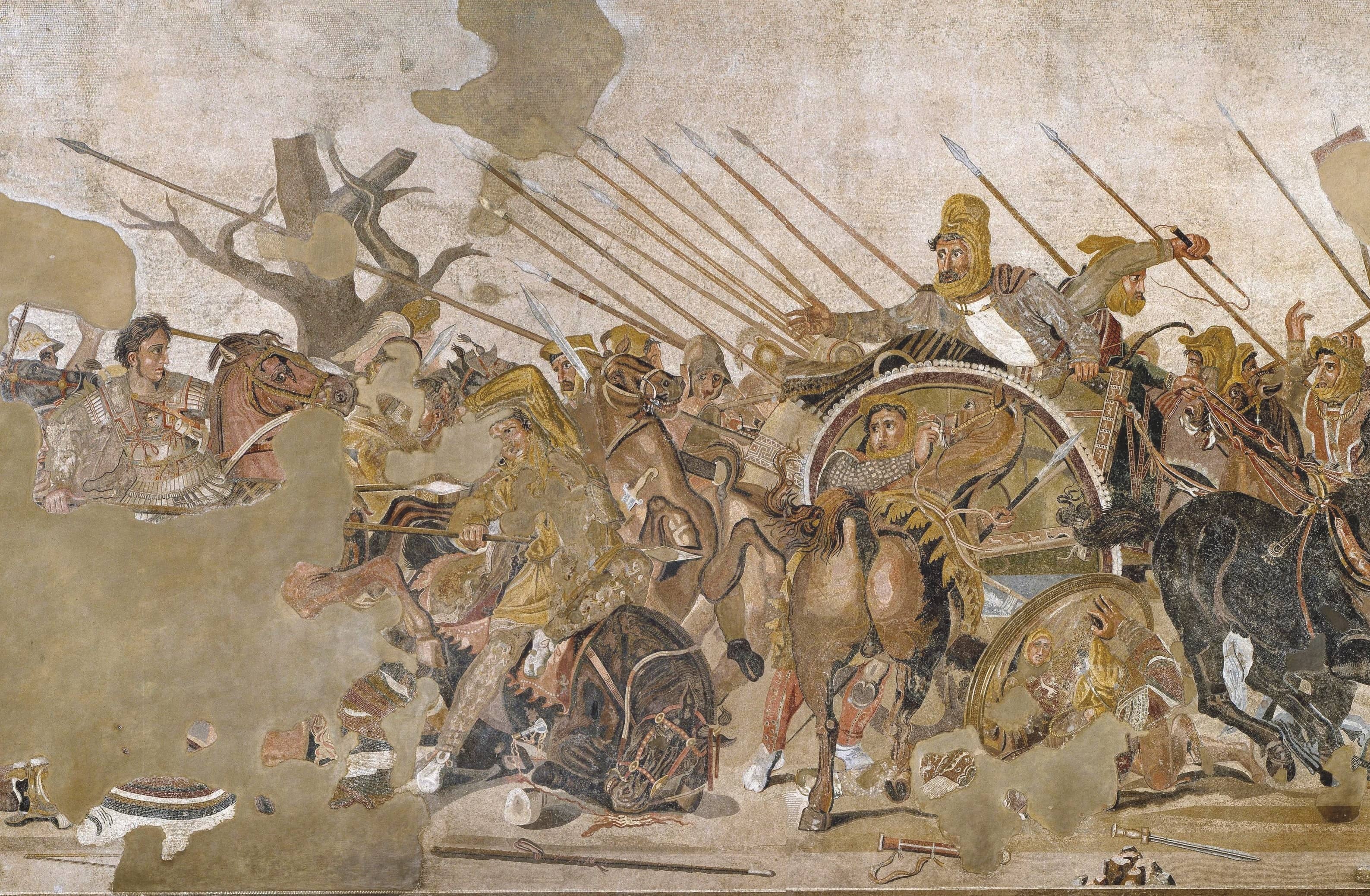 Hunting is known to be an ancient practice, but just how ancient was made clear by a discovery in a coal mine outside Schoningen, in northern Germany. There, archaeologists uncovered nine wooden spears, along with the remains of several dozen butchered horses. The spears have been dated to around 300,000 years ago, meaning they were likely used by early Neanderthals. This countered the belief of some scholars that early humans were scavengers who had not yet mastered hunting. 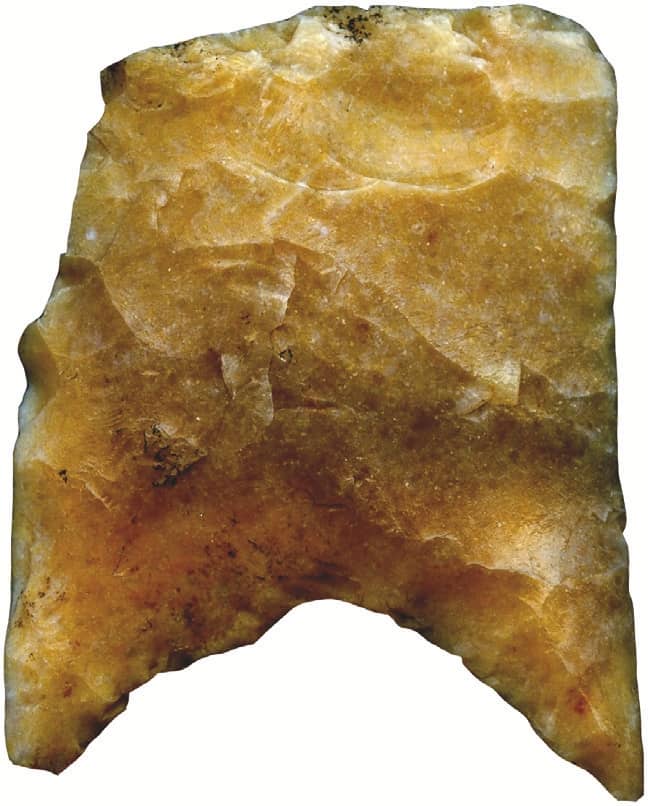 The spears, which measure around seven feet long, were produced by experienced weapon makers who planned their hunts in advance, says archaeologist Nicholas Conard of the University of Tubingen, who oversees excavations at Schoningen. All but one spear was made from spruce trees that had grown slowly in cold conditions, producing especially hardwood. The shafts were designed to be thicker, and therefore heavier, near the front, lending them greater stability in flight, and the tips were carved slightly off-center, to avoid the soft pith at the tree trunks’ cores. “They knew exactly what they were doing,” says Conard.

The Schoningen spears were likely thrown by hand, making them most effective at close range. Much later in hominin development, modern humans devised spear-throwers called atlatls that allowed them to fling projectiles at greater velocity and hunt game from farther away—likely providing an advantage over Neanderthals. A number of stone points recently discovered at the Gault site, in central Texas, were most likely hafted onto wooden shafts and hurled with atlatls at targets such as bison and mammoths, says Tom Williams of the Texas Archeological Research Laboratory at the University of Texas at Austin. The points have been dated to between 20,000 and 16,000 years ago, making them the oldest projectile points unearthed in the Americas. 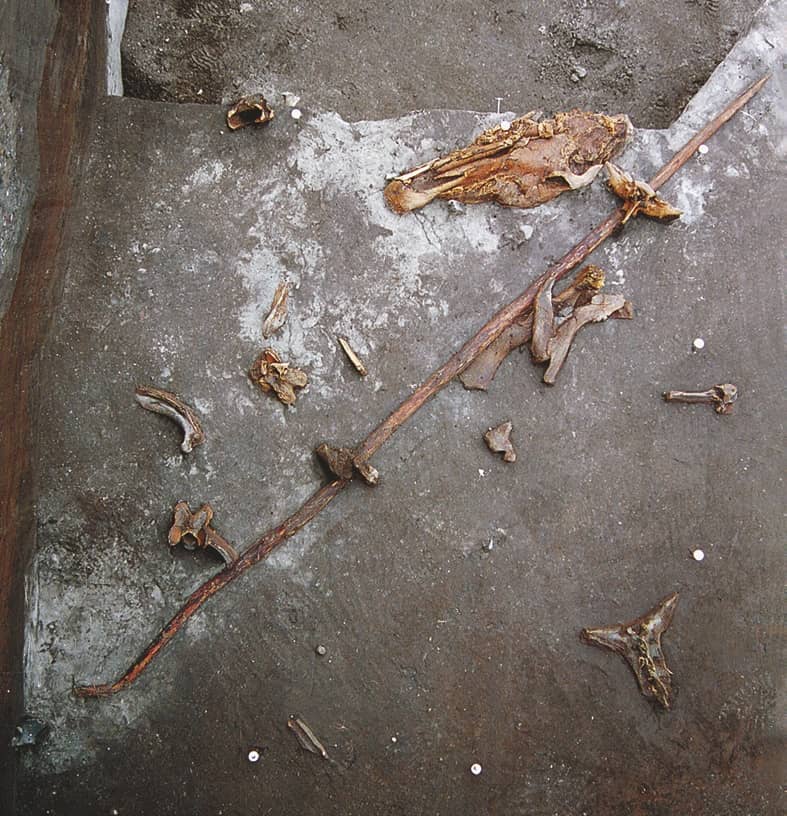 Even more powerful than the atlatl is the bow and arrow, though ancient archery equipment made of perishable materials rarely survives. An exception is the bow, bowstring, quiver, and arrows found with the ice mummy Ötzi, who died high in the Italian Alps some 5,300 years ago. The 14 arrows found in Ötzi’s doeskin quiver were made from branches of the wayfaring tree. Two of these arrows were ready to be fired, a trio of feathers still stuck to their ends with birch tar glue and nettle fibers. This design, with feathers arranged to produce a straight flight path, has remained virtually unchanged since. 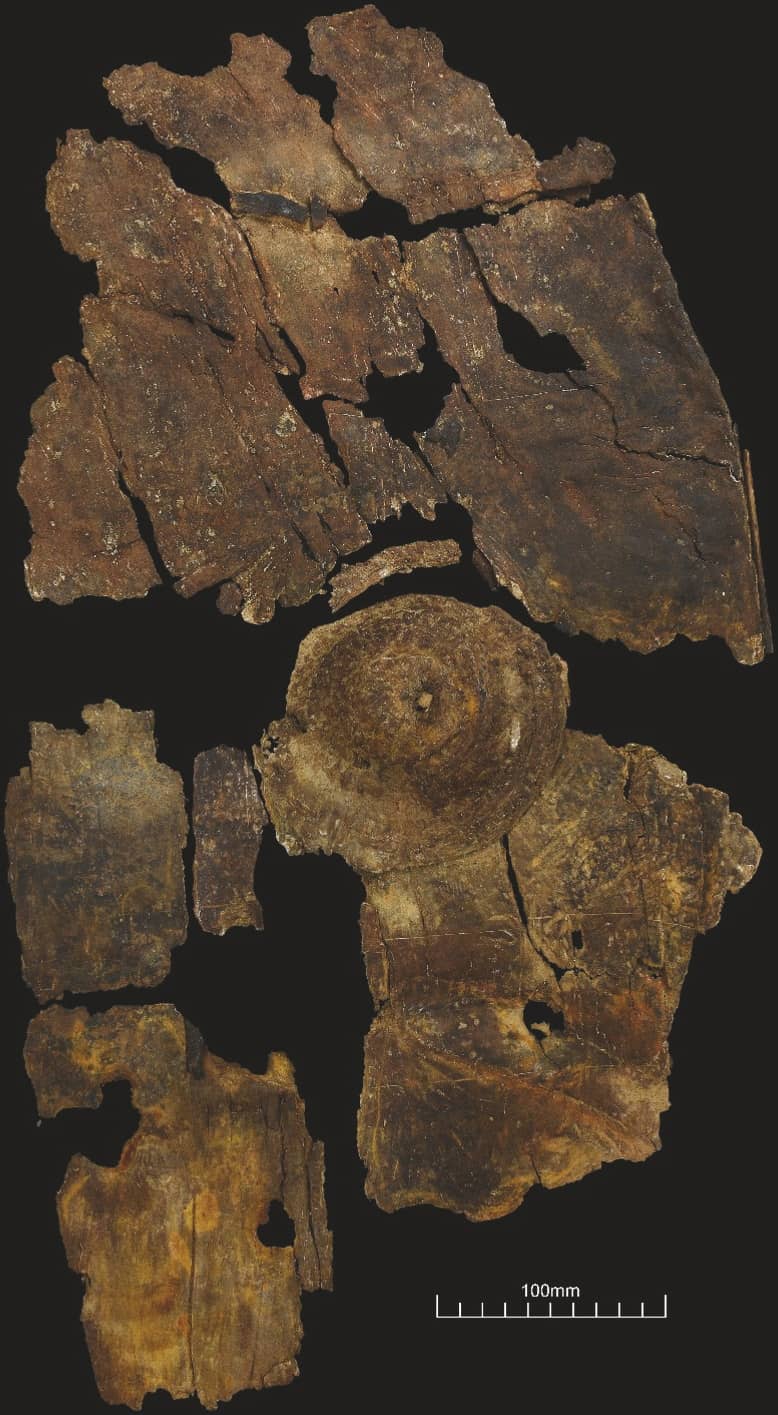 Given its life-saving potential, a shield might be a warrior’s most important resource. Although spectacular metal examples such as the Battersea Shield are well known, it’s the rare survival of shields fashioned from perishable materials that has produced a new understanding of the construction of these protective devices in Iron Age and Viking Age Europe. During a recent excavation near Enderby in central England, archaeologists discovered an Iron Age (ca. 750–43 b.c.) shield made of bark—the only such shield ever found in Europe. “The Enderby shield is a missing part in a whole sphere of organic shields, which must have once been abundant,” says archaeologist Matthew Beamish of University of Leicester Archaeological Services (ULAS). Some scholars have thought that the design of bark or wooden shields was based on metal examples, but the ULAS team suggests that the slight hourglass shape of Iron Age metal shields may instead have been modeled on the distinctive look produced by the drying process of bark or wood. Such bark or wooden shields were likely suited to light combat, where the relative weightlessness of the organic material offered a greater advantage than did the impregnability of a metal shield, explains Beamish.