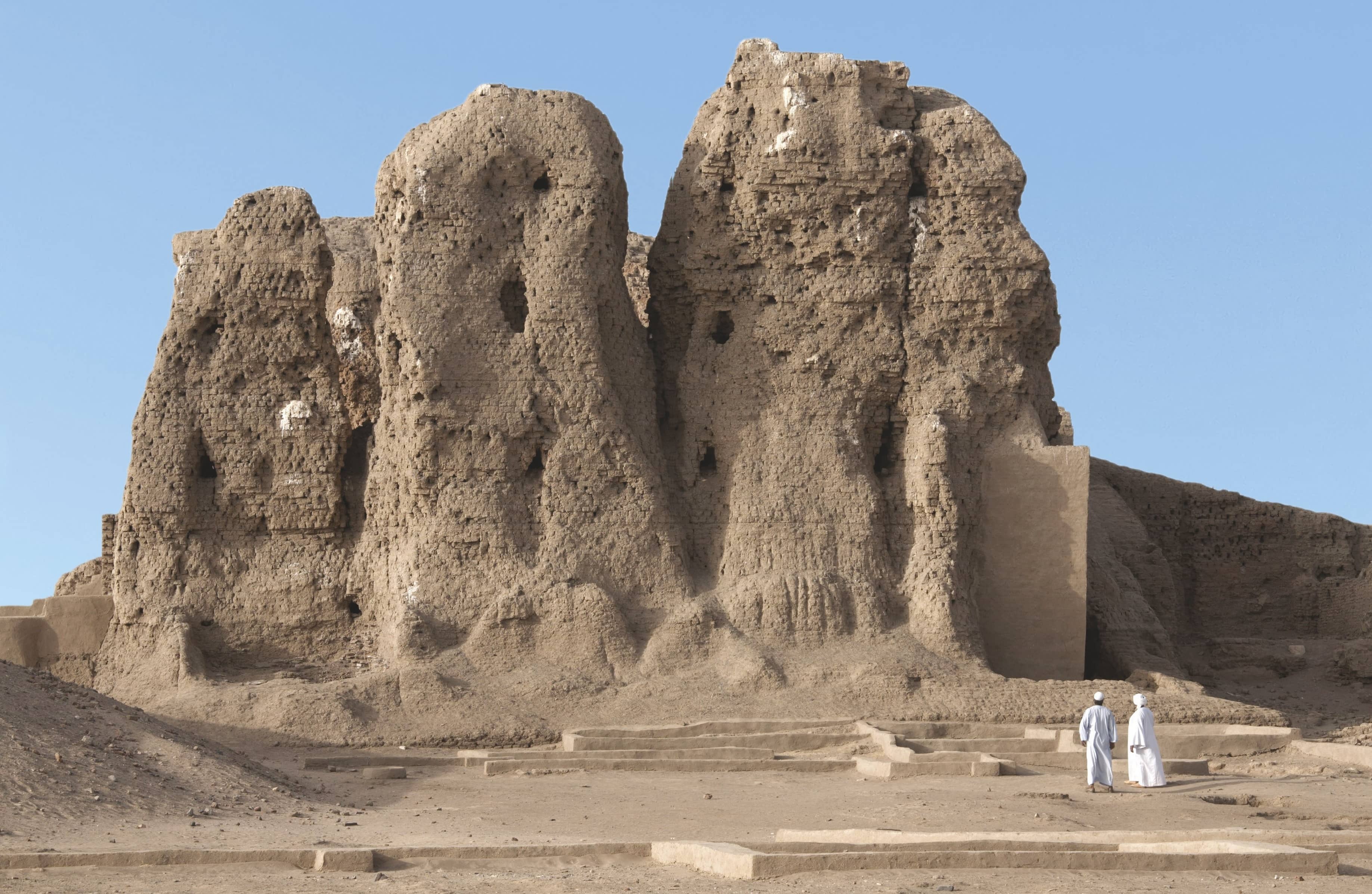 As the nile slices through the barren desert of North Africa, it runs straight north, with the exception of one magnificent curve, reminiscent of a giant S. This stretch of the river winds through northern Sudan approximately 250 miles south of the Egyptian border. Known as the Great Bend of the Nile, it marks the southern boundary of Nubia, a region that stretches from Sudan into southern Egypt and has been home to the Nubian people for millennia.

The modern Nubian town of Kerma sits at the northern end of the Great Bend. It is a bustling riverside community teeming with animated produce markets and fishing boats piled high with six-foot Nile carp. At the center of the town rises a five-story mudbrick tower, or deffufa in the Nubian language, which has kept watch there for more than 4,000 years. Consisting of multiple levels, an interior staircase leading to a rooftop platform, and a series of subterranean chambers, the Deffufa once functioned as a temple and the religious center of a Nubian city that was founded there around 2500 b.c. on what was once an island in the middle of the Nile. Also known as Kerma, it was the earliest urban center in Africa outside Egypt.

Below the Deffufa, archaeologist Charles Bonnet of the University of Geneva has spent five decades excavating Kerma and its necropolis. Much of what scholars know of early Nubian history comes from ancient Egyptian sources, and, for a time, some believed Kerma was simply an Egyptian colonial outpost. The pharaoh Thutmose I (r. ca. 1504–1492 b.c.) did indeed invade Nubia, and his successors ruled there for centuries, just as later Nubian kings invaded and held Egypt during the 25th Dynasty (ca. 712–664 b.c.). The ancient history of Egyptians and Nubians is, thus, closely intertwined. But Bonnet’s excavations are offering a markedly Nubian perspective on the earliest days of Kerma and its role as the capital of a far-reaching kingdom that dominated the Nile south of Egypt. His finds there and at a neighboring ancient settlement known as Dukki Gel suggest that this urban center was an ethnic melting pot, with origins tied to a complex web of cultures native to both the Sahara, and, farther south, parts of central Africa. These discoveries have gradually revealed the complex nature of a powerful African kingdom.

Bonnet began working at Kerma in 1976, some 50 years after Egyptologist George Reisner, the first archaeologist to dig at the site, closed his excavations. As the leader of the joint Harvard University–Boston Museum of Fine Arts Expedition, Reisner had spent many years directing excavations at the Great Pyramid of Giza and working in southern Egypt, where he developed an interest in ancient Nubian culture and in connecting its history to that of the Egyptians. “Reisner thought the place to find new Egyptian art would be in northern Sudan,” says Larry Berman, curator of Egyptology at the Boston Museum of Fine Arts. In 1913, by request of the Sudanese Antiquity Center in Khartoum, Reisner was directed to Kerma, which, at the time, was only vaguely known to Westerners from the accounts of nineteenth-century European explorers. He was completely unprepared for what was to come. “When Reisner arrived at Kerma, he accidentally discovered a civilization the scope of which was unknown to the Western world,” says Berman.

In his early years at the site, Reisner focused on excavating the giant Deffufa and investigating tombs in the city’s necropolis two miles to the east. Dozens of royal tombs he uncovered their date to between 1750 and 1500 b.c. when the city was at its height. These tombs contained hundreds of human and animal sacrifices, jewelry crafted from quartz, amethyst, and gold, and preserved wooden funerary beds inlaid with scenes of African wildlife fashioned of ivory and mica. In one of the tombs Reisner unearthed a large, elegant granite statue depicting Lady Sennuwy, the wife of the prominent Egyptian governor Djefaihapi, who ruled a district north of Luxor sometime between 1971 and 1926 b.c. Nearby, Reisner found a broken bust of Djefaihapi himself.

Most artifacts Reisner excavated were distinct from what he had seen in Egypt, which led him to determine that the inhabitants of the site were from a different culture, which he named Kerma after the surrounding modern town. Reisner also recognized that different African cultures had coexisted in the ancient city. One of these he called the C-Group, a somewhat enigmatic culture that would become key to understanding the site’s origins. Despite recognizing that Kerma was populated by ancient Nubians, Reisner did not believe that the Kerma people had been capable of constructing such a magnificent site, and assumed that they had received help from the Egyptians. The Deffufa, he thought, was most likely the palace of Kerma’s Egyptian governor.

Of the thousands of artifacts that Reisner discovered at Kerma, the sculpture of Lady Sennuwy, in particular, cemented his Egyptocentric interpretations. “The statue was, at the time, the most beautiful Middle Kingdom statue that any American museum had ever found, and its discovery reinforced Reisner’s ideas that Kerma was ruled and influenced by Egypt,” says Berman. “Scholars at the time were completely unprepared to admit the existence of an indigenous civilization in Nubia that could rival that of Egypt.”