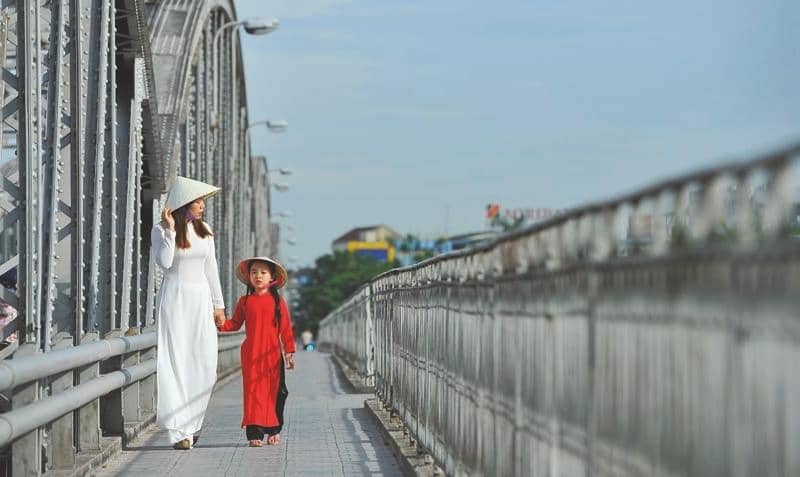 Culture has served as the most sensitive part to Hue natives and they are always ready to fight for the cultural values that have existed in a long period of time in this former imperial capital city.

Hue natives show strong respect to local culture. In history, locals proved this through the fight against the invasion of Catholics accompanied by the French colonialists in 19th century.

Today people in this royal city remain cautious and conservative against the integration, particularly in culture. Most of the people here consider the cultural exchange as in invasion in culture rather than a process to get locals integrated into the popular norms globally.

Recently, dedicated cultural researchers from Japan and several countries that are motivated in cultural conservation have come in the city and appraised it as the best one in the country in preserving the old positive values to Vietnamese people.

Those comments have made locals more responsible for their culture and costume is a prominent example.

In light of the Vietnamese national costume ao dai, Hue natives’ pride stays at two key points. The first is that the city was the birthplace of this charming dressing style. The costume was created in Hue by a ruler among Nguyen Lords (1558-1777), the ancestors of later kings under the Nguyen Dynasty (1802-1945). Minh Mang, the second king of the dynasty, made the costume popular throughout the country and it became the national costume today.

Locals are also proud of the popularity of ao dai in daily life in the city as well as the well preservation of the costume traditions. Middle-aged and elder local women remain the choice of ao dai as the only formal costume for them.

Once the pride is big, locals always have an open wide eye on any touch to the costume. Any changes to the traditional designs of ao dai will easily get boos.

Traditionally, local women combine ao dai with non la, which is a type of hat made by palm leaves in conical shape. Earlier in April, Minh Hanh, a popular fashion designer in the country had her models worn ao dai and non la participated in a street parade during an event honouring Vietnamese craftsmanship held in this royal city.