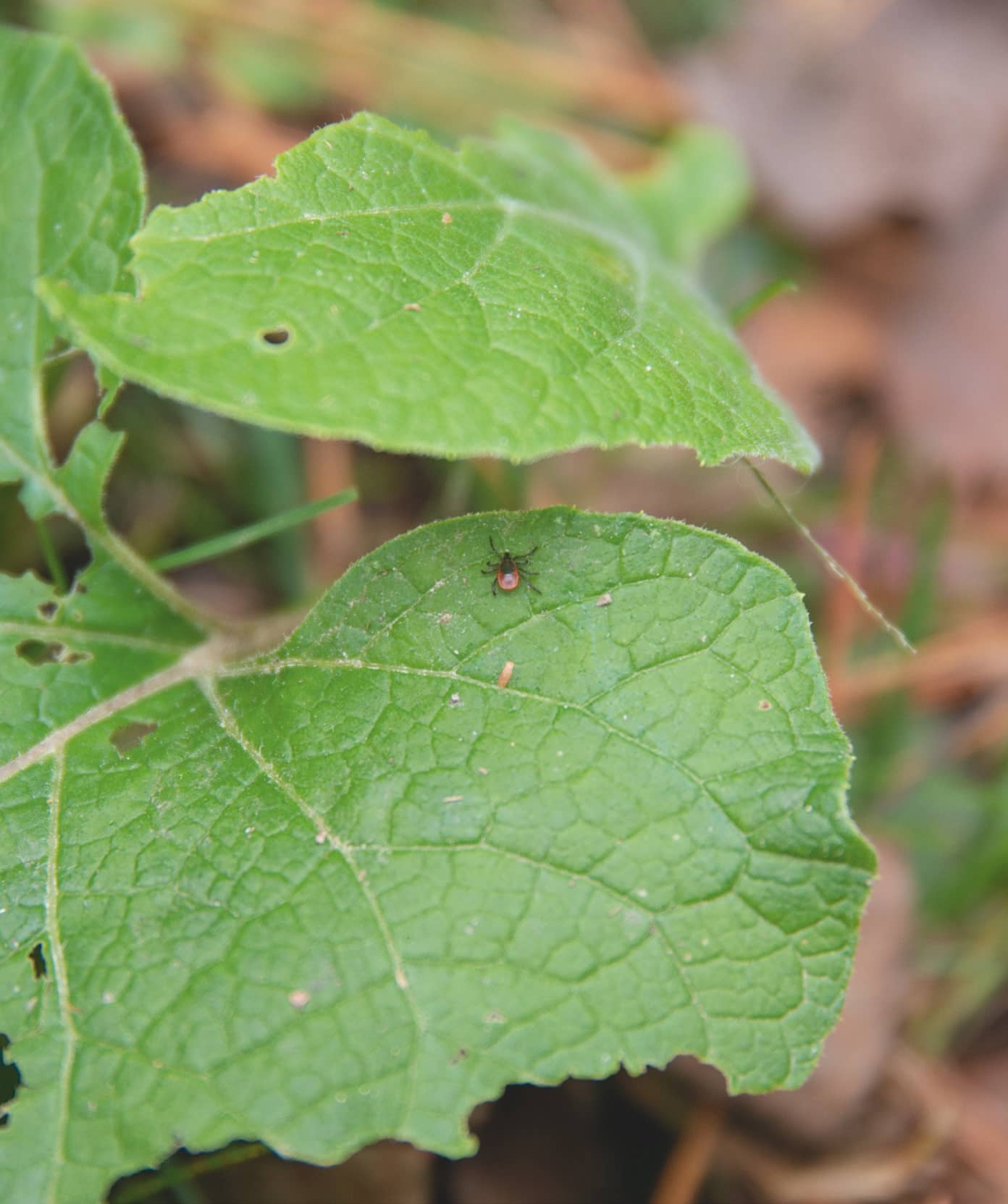 WHEN KATIE CLOW and her research students arrive in a windowless lab at the Ontario Veterinary College, in Guelph, Ontario, on a drizzly late-fall morning, envelopes have piled up on their workbench like a manila snowdrift. They slip on white coats and reach for scissors to start slitting open the padded packets. Each one contains a slip of paper and a small plastic vial or two. The paperwork lists the name of a veterinary clinic somewhere in Canada and the identifying details of someone’s pet: a six-year-old golden retriever in Moncton, a four-year-old tabby in Victoria.

Inside each corresponding vial is a tick — or fifty — plucked from the body of that pet and mailed in for research. With her team, Clow, a professor of veterinary medicine with expertise in epidemiology and ecology, opens the vials and tips the rigid bodies of the arachnids into a petri dish. Unless they’re not dead: after a week or two in the custody of Canada Post, they sometimes emerge and start scurrying across the bench. When a live one tumbles out in front of research assistant Kiera Murison, she snatches a pair of tweezers to pluck it up and deposits it into a vial of ethanol, with a whispered apology, swirling it around to bring a prompt demise.

When the ticks are all definitely dead, they are stored in the fridge until Clow, an ebullient thirty-two-year-old whose students call her the Tick Queen, has time to sit down with a box of them. She identifies the ticks quickly, by species and by gender, based partly on the appearance of their hard outer shell, called a scutum, and sometimes by the shape of their protruding mouthparts. Most of the ticks mailed to her Canadian Pet Tick Survey are American dog ticks, Dermacentor variabilis, or black-legged ticks (also called deer ticks), Ixodes scapularis: those are the two types you are most likely to find on your pet or your tent or your toddler this summer.

Once identified, the ticks go under the knife: with a scalpel blade, Murison slices them to bits. Ticks that were found and removed before they had time for a long feed are smaller than a watermelon seed and nearly as crunchy: they resist the scalpel. But the engorged ticks, the ones that had a hearty blood meal, can be swollen up like a stewed cranberry. Cutting them is more like carving a soggy M&M. “You definitely hear the outer shell breaking,” says Murison, hacking away at a rigid American dog tick so vigorously that her blond ponytail swings back and forth. When the engorged ticks are dissected, they give off a loamy smell from the coagulated blood that has ballooned them to as much as ten times their original size. Clow and her team marinate the chopped ticks in chemical reagents then run them through a process that extracts the dna in the bug hash. There are two main types of genetic material they are looking for in black-legged ticks: that of Borrelia burgdorferi, the bacteria that causes Lyme disease, and Anaplasma phagocytophilum, the cause of anaplasmosis, which brings fever, vomiting, and in rare cases, can cause respiratory and organ failure. Clow finds B. burgdorferi in about 25 percent of samples; A. phagocytophilum is much more rare, found in just 1 to 2 percent.

Murison shoves aside a heap of envelopes and shakes her head at the pile. We’re not supposed to be getting this many in October,” she says. There are ticks in all seasons now. Lyme rates are surging because the ticks that spread it — I. scapularis, predominantly — are rapidly expanding their range. Climate change has made much of the most populated part of Canada an ideal habitat for many species of ticks; I. scapularis, which spreads Lyme, in particular, is rapidly expanding its range. In the early 1970s, there was just one known colony of black-legged ticks in Canada, at Long Point, on the north shore of Lake Erie. By the 2000s, the tick was being found all over southern Ontario, Quebec, Manitoba, and the Atlantic provinces. Today, they’re marching steadily west from Manitoba on their eight tiny legs.

I. scapularis is no bigger than a poppy seed when it does most of its damage, but this particular tick is emerging as an outsize threat. “Their capacity to move into new areas and to take advantage of suitable habitats and warming climates is completely different,” says Robbin Lindsay, a research scientist at the National Microbiology Laboratory in Winnipeg. Lindsay has studied this particular tick extensively in a long career that has made him an internationally recognized expert on vector-borne illnesses. He has been bitten by hundreds of ticks, a couple of which made him hideously ill, and yet, when he speaks of I. scapularis, admiration suffuses his voice. “The sky seems to be the limit for them,” he says. “They are taking over the reins as the number one vector of pathogens to humans. And that’s only changed in the last twenty years.” I. scapularis is “extremely Catholic with its taste for blood,” Lindsay says. It will feed on both migrating birds and big mammals that cover wide ranges — helping it expand its territory — and it’s also delighted to encounter a human and her dog. In tick-borne disease literature, the black-legged tick is almost universally described as “aggressive.”

The knowledge that this tick is proliferating in the most densely populated area of Canada, potentially spreading not just Lyme disease but anaplasmosis and babesiosis, an infection that resembles malaria, is disturbing in ways that it feels as though we have not yet grasped. It will precipitate a significant change in how Canadians view our relationship with our environment. When I asked another tick expert, Nick Ogden, a research scientist at the National Microbiology Lab, how much he worried about ticks, he explained that, since he did much of his research in Africa, where he was thinking about puffadders, typhoid, cholera, malaria, and about a dozen other things that might kill people, ticks figured fairly low on his list.

In Canada, however, the list of ambient things we must fear is not long. Outdoors, it’s grizzlies, rattlesnakes, maybe a rogue cougar if you are massively unlucky, and of course, the cold. Otherwise, it’s icy highways, drunk drivers, and unstable ladders. But we don’t need to worry much about lethal things lurking in our gardens or in the dark corners of our closets. Or, rather, we didn’t need to. Until now.

ON A COLD grey autumn afternoon, Katie Clow takes me into the woods, an hour’s drive from Guelph, to drag for ticks. She equips me with a white hazmat suit, seals off my ankles with duct tape, and hands me a white flannel blanket taped to a meter-long stick. Then we set off into the underbrush, dragging the blanket awkwardly over brambles. We pass a few hikers, who take one look at our CSI getups and our blankets and hurry away. Clow and her team of students go dragging every year, and every year they find ticks farther north. “One year you find a couple of ticks,” she says, “and the next year you’re finding half a dozen ticks, and the next year you’re finding ten ticks and Borrelia.”

Where there is Borrelia burgdorferi, there’s a risk of Lyme. The disease causes fever, fatigue, and joint aches, and it is an emerging public health problem. There were 2,025 cases reported to the Public Health Agency of Canada in 2017, the last year for which data is available, but the agency speculates that number is underreported and predicts as many as 10,000 new cases each year in the 2020s. Huge swaths of Ontario, Quebec, Manitoba, New Brunswick, and Nova Scotia are now considered Lyme risk areas. But, at the same time, we’re more aware of Lyme and how to manage it: many people who spend time in areas with ticks know to do a “tick check” after being outside and know that, if you find and remove the bug within twenty-four hours of when it began to feed, you can’t get the Lyme bacteria. While there is no vaccine for Lyme available, the bacteria is treatable with antibiotics. If you don’t find the tick or don’t get the telltale bull’s-eye rash, Lyme can be harder to identify, and you can suffer symptoms for weeks or months until diagnosis. A small subset of those infected report a “chronic” infection, although most scientists reject the idea this could occur; one hypothesis is that the so-called chronic infections are actually coinfections of Lyme and another tick-borne pathogen, such as Anaplasma, for which doctors do not routinely test.

After about an hour in the forest with Clow, I stop for a periodic inspection of my blanket and, right near the top, heading with surprising speed for the handle (and my bare hand) I see — something? “Katie,” I ask, “is this a tick?”

Clow hurries to me, leans in for a look, and lights up like Christmas morning. I have picked up an adult female black-legged tick, with a black hood on a handsome dark-red scutum. A short while later, Clow finds a tick on her own blanket and is equally pleased: you’d never guess she has encountered 10,000 ticks in her professional life. She identifies it — another I. scapularis — then sets it gently down on a leaf so I can have a good look. The tick immediately scooches to the end of the leaf and begins to wave its front legs back and forth.

“Ooh,” Clow croons. “She’s questing!” A questing tick waits at the end of a blade of grass or leaf, with its legs outstretched, tracking the changes in heat and CO2 that signal that something biteable is walking by, poised to jump aboard — a sort of arthropod hitchhiking. Watching Clow watch the tick, I recognize the phenomenon that I saw in Robbin Lindsay and every other tick expert I talked to: the admiration for ticks, for their adaptability and ingenuity and complexity. 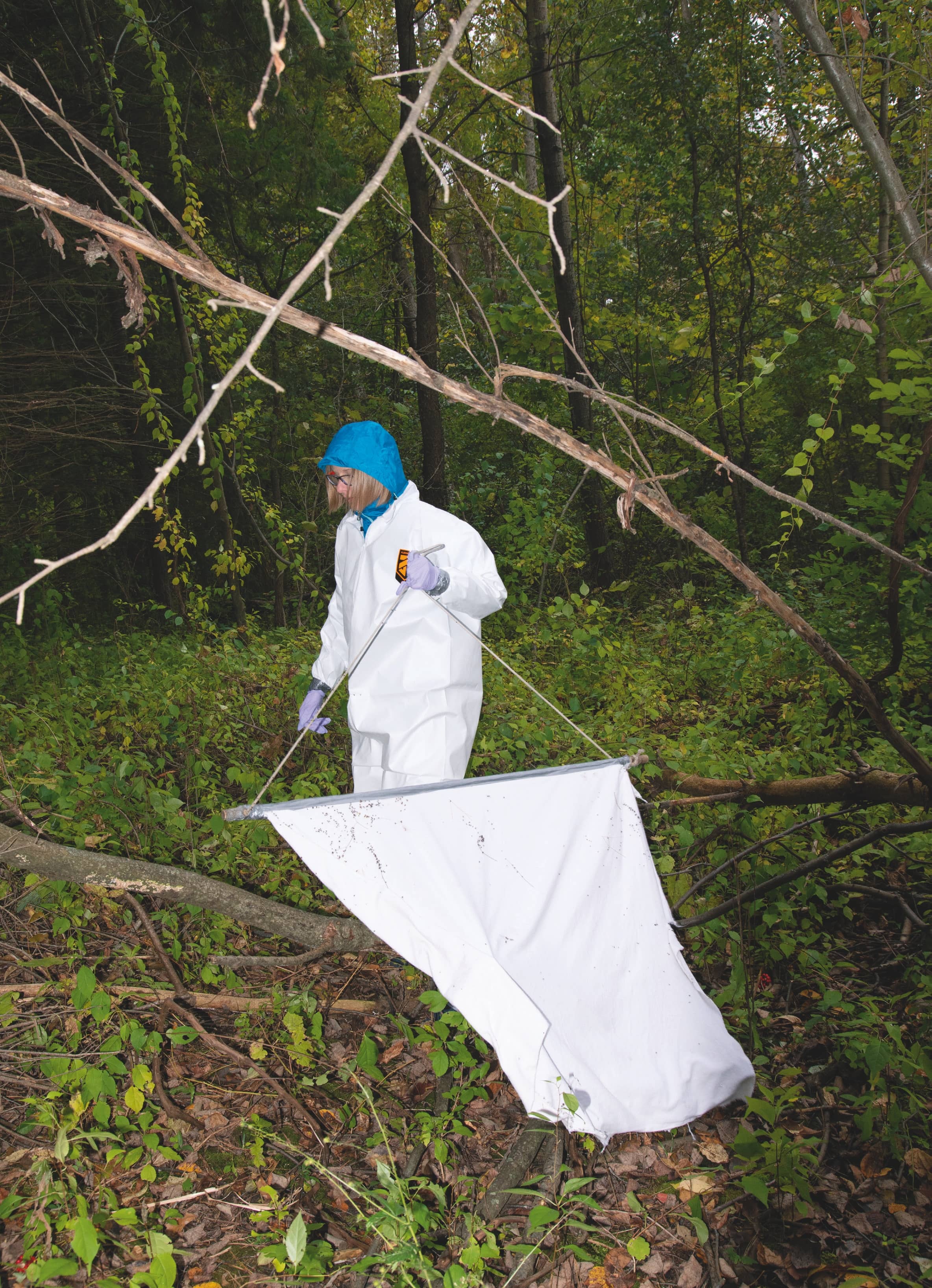