Go Sell It On The Mountain 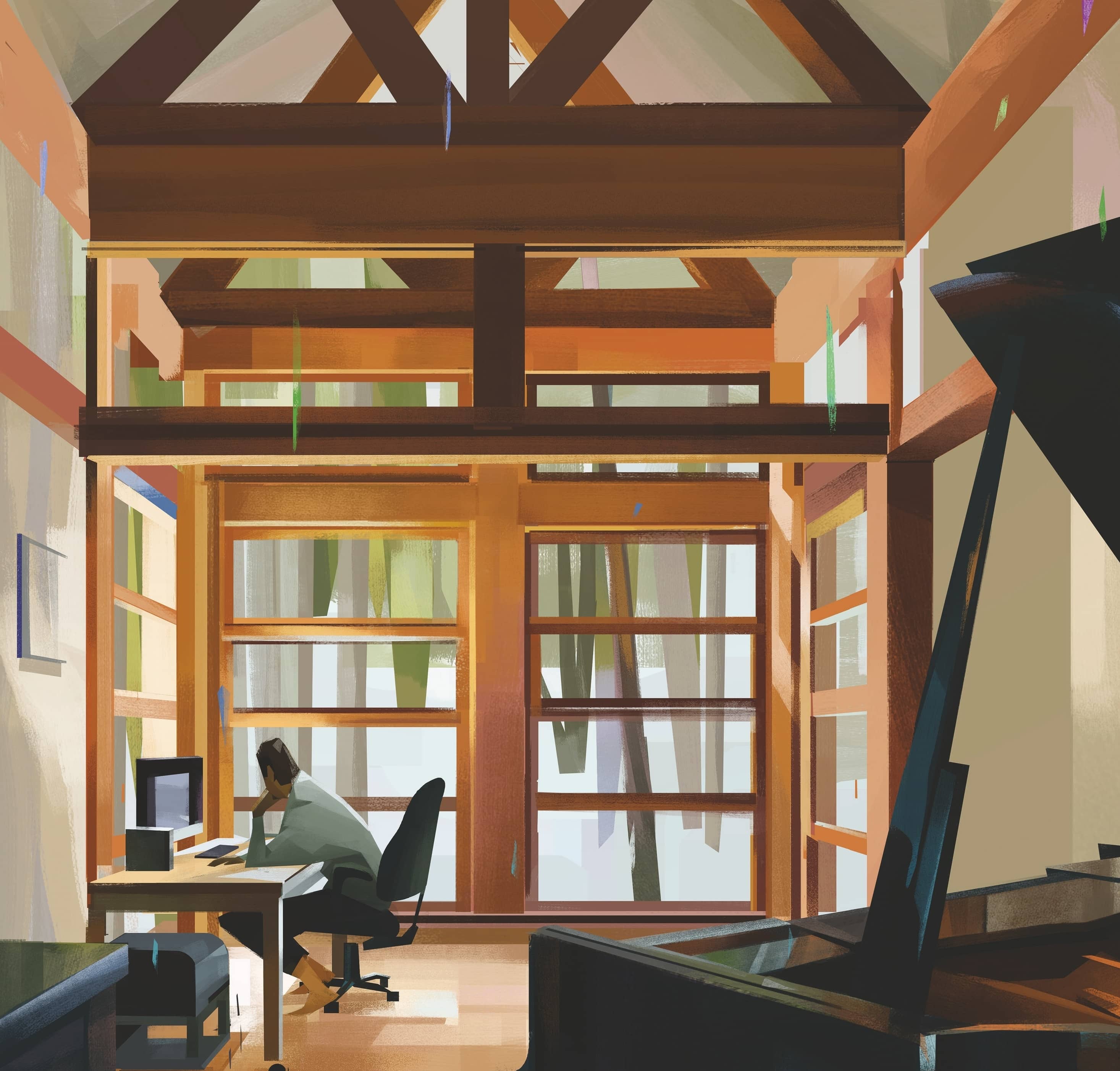 Banff Centre started off as a remote artists’ retreat. Now it’s trying to help creatives adapt to the modern world

One afternoon in 2017, while visiting Alberta’s Banff Centre for Arts and Creativity, I took shelter from the rain in Glyde Hall, the visual-arts building. Deep in the basement, near the ceramic and paper-making studios, I came across something odd.

Rock, from the nearby mountains, was coming out of the floor. Not a wee chunk but a huge shelf of limestone, tall and wide enough for at least six people to climb onto without feeling crowded. This, in the middle of a workspace. Embedded in the rock, I later learned, are around 300-million-year-old fossils: stromatoporoids from a reef environment of the Paleozoic era, back when Banff was undersea. Tectonic forces brought the limestone up to where it is now. What I was seeing was an architectural hack: they built the basement around the rock to save having to blast through it. But the effect was deeper and weirder, science-fictional as if the rock had pushed into the building like the Blob, oozing through a crack in the floor.

This sense, nature as animated and commanding attention, has helped make Banff Centre one of the premier arts-and-culture institutions in the world. Hundreds of artists, of every school and discipline, come through here every year — some by invitation, most as applicants — to escape urban life, figure things out, and get to work. There’s a residence, a library, rehearsal halls, and theatres. There is a gym. There are yoga classes. There are places for students to eat and areas, like Glyde Hall, where they can create and exhibit the results. Lodged in a national park in the Rocky Mountains, Banff is supposed to be cut off from the real world, the better to act as crucible for inspiration. Weather rolls in as metaphor. The air is scrubbed clear, and something new is set in motion: country music, abstract paintings, ceramic bowls, sonnets, one-act plays, avant-garde sculptures, the odd theatrical wig — all the fine things that artists can produce when free from distraction. Notable alumni over the years range from Yann Martel and Joni Mitchell to Bruno Gerussi and Claudia Rankine, Guy Maddin to John Luther Adams. Artists have to make a living, but Banff, for me, has always looked like a place where that fact can be postponed, briefly, in the act of creation.

The link between nature and creativity is an old idea and one on which Banff Centre’s reputation is based. The site is significant: the campus is in the middle of rugged, whitewater wildlife. It’s a mood, as if the mountains are closing in on you. Nothing fatal, just dark and weird: Twin Peaks for cellists and painters. Those surroundings provide the “ peculiar mental background” — isolation, stark weather — that Stephen Leacock believed Canadians shared and that, for generations, has been a boon to writers and artists. About a ten-minute walk away, in the town itself, is a main drag whose gift shops sell fridge magnets, expensive Arc’teryx jackets, dream catchers, and stuffed rainbow poo-emojis. Tour buses egest people dressed too warmly for mild weather. Last year, the town considered a ban on backyard bird feeders as they become food sources for bears. With its faux–Gold Rush architecture, Banff is a quasi–theme park in which nature, often red in tooth and claw, lurks just behind a theatrical curtain. Same with Banff Centre — which you’ll find up the hill on Wolverine Street, past the old cemetery — where Newfoundland writer Joan Sullivan was charged, she once told me half-proudly, by an elk.

I went to Banff over two years ago to see what was behind a rebranding of the famous arts centre. While the idea of the solo artist in a quiet studio was still relevant, Banff now wanted to be the place to teach artists how to be entrepreneurs, to brand themselves. In other words, there appeared to be another idea being built around the living rock of the mountain: commercial success. This involves promoting, teaching, and nurturing the business smarts of the artists; not shielding them from the working world but preparing them for it. Classical musicians, depending on the program, are coached on everything from building marketing and business plans to the intricacies of touring.

None of this changed the underlying purpose of Banff Centre for artists: to be amazed, and not a little spooked, by the sublime, by the unknown, by that which startles the impressionable. “They meet other artists, they think about their art and commune with nature,” says Janice Price, president and Ceo of Banff Centre since March 2015 and the main driver behind its new image. “But I don’t know any artists who are not doing the work for an audience.” Price knows something about the kind of audience artists often crave. Before coming to Banff, she was head of Toronto’s Luminato Festival,a kind of culture-crawl which, every June, brings theatre, film, and art installation to public and private spaces. She was also interim executive director of Lincoln Center for the Performing Arts in Manhattan, home to the Met Opera — and arguably the Buckingham Palace of North American arts centres.

Banff Centre, Price suggests, has ambitions too. It is interested in artistic entrepreneurship on an international scale and in being noticed. In this context, that means producing art that can raise approving eyebrows in not just Calgary but Berlin and New York. (As an example, there’s Betroffenheit, a dance-theatre piece on trauma and loss that Van couver choreographer Crystal Pite developed at Banff in 2014 before eventually taking it to London, England, where the Guardian called it “raw and riveting.”) To that end, I was told in a communications brief, “every artist and arts administrator needs to be an entrepreneur, to understand how to create great work, find an audience, find a donor base, and propel that work to Canadians and the world. That’s what we are teaching at Banff Centre.”