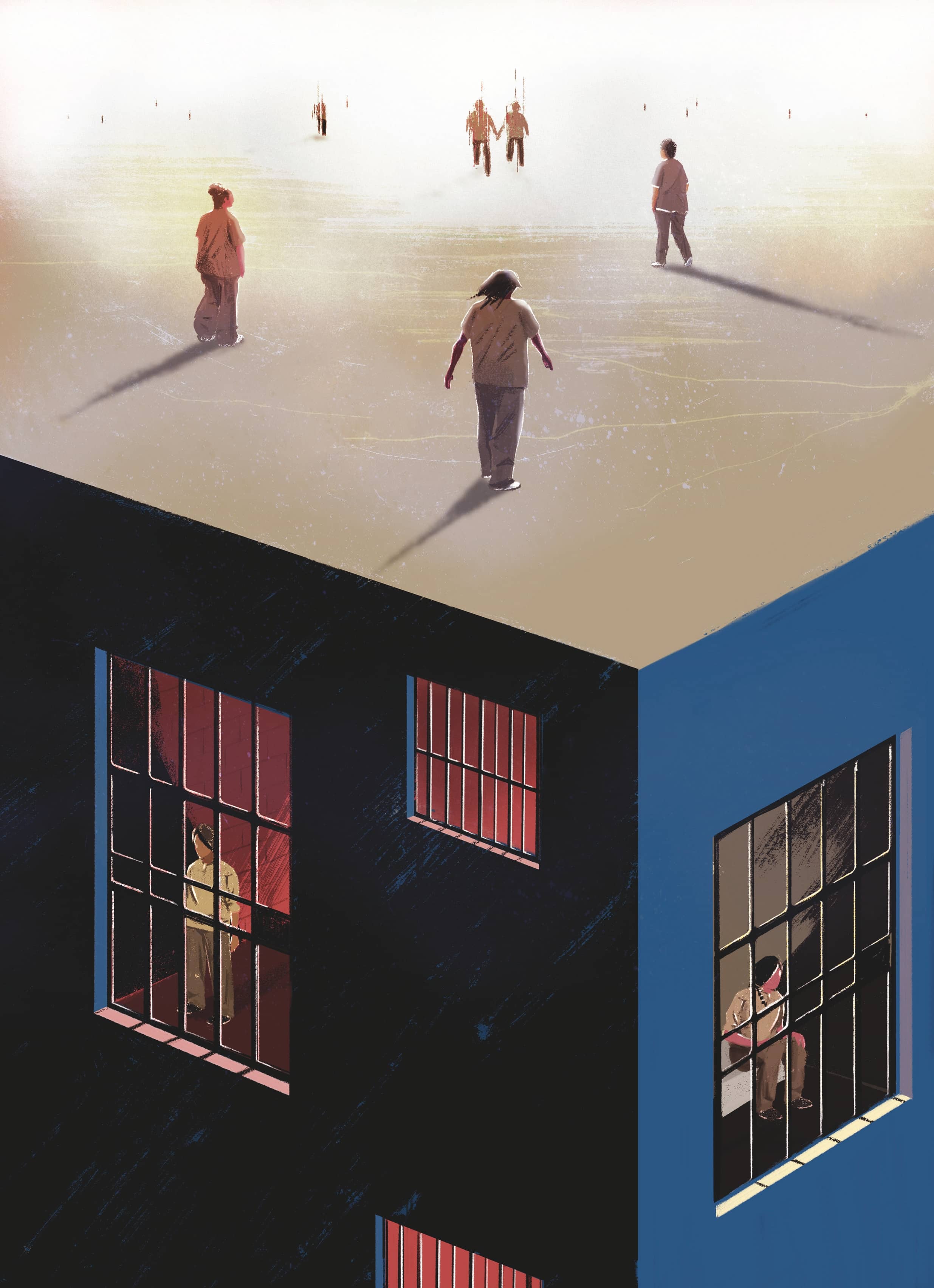 The case for abolishing women’s prisons

AT THIRTY-SEVEN, Treena Smith has been in and out of Nova Scotia’s correctional centres more than fifty times. Her criminal charges have a way of falling into one another: one mistake can trigger a dozen breaches of her probation, dragging Smith back to jail. A reunion with her girlfriend might lead to a party, which could defy no- contact restrictions, break rules against drug and alcohol use, and contravene orders to keep the peace. If the couple gets into a fight, the damage is worse. Each violation also extends Smith’s total probation time, increasing the chances of another slip-up. She doesn’t want to be in prison, but she doesn’t know how to live outside it either. “Prison has become like a safety net,” Smith says over the thrum of voices leaking through the crackly phone line at the Central Nova Scotia Correctional Facility. “What I fear is getting back out into the community. I feel like a failure there. I feel like I don’t really belong anymore.”

Smith is hardly alone. While men still make up the bulk of prisoners, women are Canada’s fastest-growing prison population. Federally, we lock up nearly 40 percent more women than we did a decade ago — a rise that has coincided with cuts to social services nationwide and the over-policing of racialized communities. Between 2002 and 2012, the number of Indigenous women in federal custody more than doubled. In eastern Canada, Black women and women with disabilities are incarcerated at higher rates than the rest of the population. Most inmates are single mothers. The vast majority have never had steady employment, a bleak reality reflected in the crimes for which they tend to get imprisoned. A quarter of the women in federal custody are there for drug offences, sometimes taking the fall for others. Beyond that, property crimes, such as shoplifting and vandalism, rank as the most common transgressions. Any violence is often in self-defence — against an abusive partner, for example.

Rarely, in other words, are women incarcerated because of an abhorrent act —  the type of scary, blood-splattered crime that prison supporters and modern culture alike conjure as justification for the correctional system. By and large, these women have found themselves in terrible situations and are desperately trying to get out, which can lead to prison’s problematic allure as a temporary refuge.

Sandra Bucerius heads the University of Alberta Prison Project and is a professor of sociology and criminology at the school. She has interviewed over 600 prisoners in one of the largest qualitative studies on the challenges facing inmates worldwide. Dozens of women have told her that incarceration is better than the alternatives: going hungry, living on the street, being beaten by partners, being unable to afford medication, or facing addiction without access to treatment. But, as Bucerius points out, prisons were never designed to be stand-ins for mental health support, addiction care, employment services, or shelters. Instead, they are structured around ideas of punishment, places where we “lock ’em up” —  “them” being Canada’s dangerous and undesirable. Even as notions of reform and healing have muddled their purpose, the ugly truth is that prisons warehouse people we don’t want or don’t know what to do with — people our society has failed to support.

That’s especially true of women prisoners. A 2017 government-led study found that nearly 80 percent of women in federal custody had a mental health disorder, with nearly a third having been diagnosed with PSTD. A full threequarters struggled with alcohol and substance abuse. Without a robust network of social services outside of prison, the incarceration cycle can be difficult to break. Millions of Canadians report that their mental health needs aren’t fully met, with many saying they can’t afford to change that. Private care for addiction treatment is prohibitively expensive; public wait-lists are long. Prison can begin to feel like the only place where a woman fits in. “I’m alienated out there,” says Smith. “It’s not like you’ve been out of prison for a week and you’re cured and you feel okay being out. It’s a long transition.” To compound it all, women prisoners rarely have stable homes to return to. Or, as Bucerius puts it: “Many prisoners are not going back to houses with picket fences.”

If prisons are what Bucerius calls “a social tragedy,” they’re also an expensive one. In 2016/17, it cost nearly $84,000 a year, or about $230 a day, to house a woman in a federal prison. Overcrowded conditions, as well as the ever-increasing number of people being kept in remand custody — on any given day, 50 percent more incarcerated adults might be awaiting trial or sentencing than those actually in custody — have led those who support prisons to call for their expansion, often under the guise of making them more humane. In 2018, the government estimated that, depending on the type of facility, the price tag for each additional prison bed for women rings in at anywhere between $260,000 and $534,000. Already, Canada spends about $5 billion annually to maintain its prisons. That’s a lot of money for a broken system — one that doesn’t seem to be especially good at deterrence or rehabilitation.

“If we were talking electricity bills,” Ivan Zinger, the federal prison ombudsman, told the Globe and Mail last year, “this would be the equivalent of telling Canadians they are paying the highest hydro rates in the world and getting tons of blackouts.” covid-19 has further pushed the prison plight into the mainstream, exposing just how fast the virus can spread through buildings so overcrowded, unhygienic, and in poor repair. (As of July 1, 360 inmates in federal prisons had contracted covid-19; two had died.) In his reports, Zinger has consistently recommended funnelling more money into the existing, underfunded community programs that can keep former inmates from returning to the system: parole oversight, assistance with accommodation, job searches, and general reintegration into daily life.

It’s a sensible and forward-thinking goal. But many believe it’s no longer enough. For these abolitionists —a movement comprised of progressive politicians, criminologists, university professors, community activists, and dozens of human rights organizations — the question isn’t how the prison system can be better, it’s: What if we never sent people to jail at all?

IN NORTH AMERICA, prisons were first conceived as a kindness. Before the system was created, criminals were banished by Britain and France to penal colonies, or worse, were publicly tortured and executed. In the late 1700s, American Quakers imagined a different system: one in which offenders would instead find penitence through silence, isolation, and religious instruction — hence the term “penitentiary.” Personal reform also played an important part. Prisoners were given a chance to expunge the character deficiencies that had led to their crimes and emerge obedient, newly moral, and essentially transformed. For supporters, penitentiaries were places of salvation and second chances. In June 1835, Canada opened the Kingston Penitentiary, the first large prison in the then burgeoning country. Like its American counterparts, Kingston — which housed mostly men but also women and children — was supposed to change prisoners into perfect citizens through discipline and hard work.

Less than fifteen years later, the strategy unravelled. Whatever good intentions attended their creation, prisons quickly become places to exile Canada’s most unwanted: Black and Indigenous people, independent women and sex workers, the poor, the French. Many prisoners were demonized and, as a result, cruelly treated. The first major investigation into the penitentiary, the Brown Report, was released in 1849 and revealed the corporal punishment of boys and girls, most of them between eleven and fourteen. They were routinely flogged, usually for innocuous infractions, like making faces, winking, and laughing. One eight-year-old boy was beaten forty-seven times in nine months. The Brown Report called their treatment a case of revolting inhumanity.” Women didn’t fare any better.

According to Ted McCoy’s Hard Time: Reforming the Penitentiary in NineteenthCentury Canada, most women had been convicted of non-violent crimes, often theft. Yet the severity of their punishment outweighed their alleged misdeeds. Stuck in a section of the prison so overrun with bugs that their bodies were often blistered with bites, female offenders were physically, emotionally, and sexually abused by guards and inmates alike — in some cases resulting in pregnancy. Many were seen as deserving of the abuse, with one annual report on their treatment dismissing them as common prostitutes, diseased of body, and debased in mind from a long continuance in a career of crime.” They could not feel shame, the report’s author, a chaplain, insisted, and should not be expected to. This didn’t stop prison officials from demanding intensive labour from female inmates in the name of redemption. In one year, thirty-six women prisoners sewed 6,000 pieces of clothing and darned 10,425 pairs of socks. The Brown Report was a scathing account of penitentiary conditions, but it was met with apathy: the new prison system might not have been working, but what other options were there?