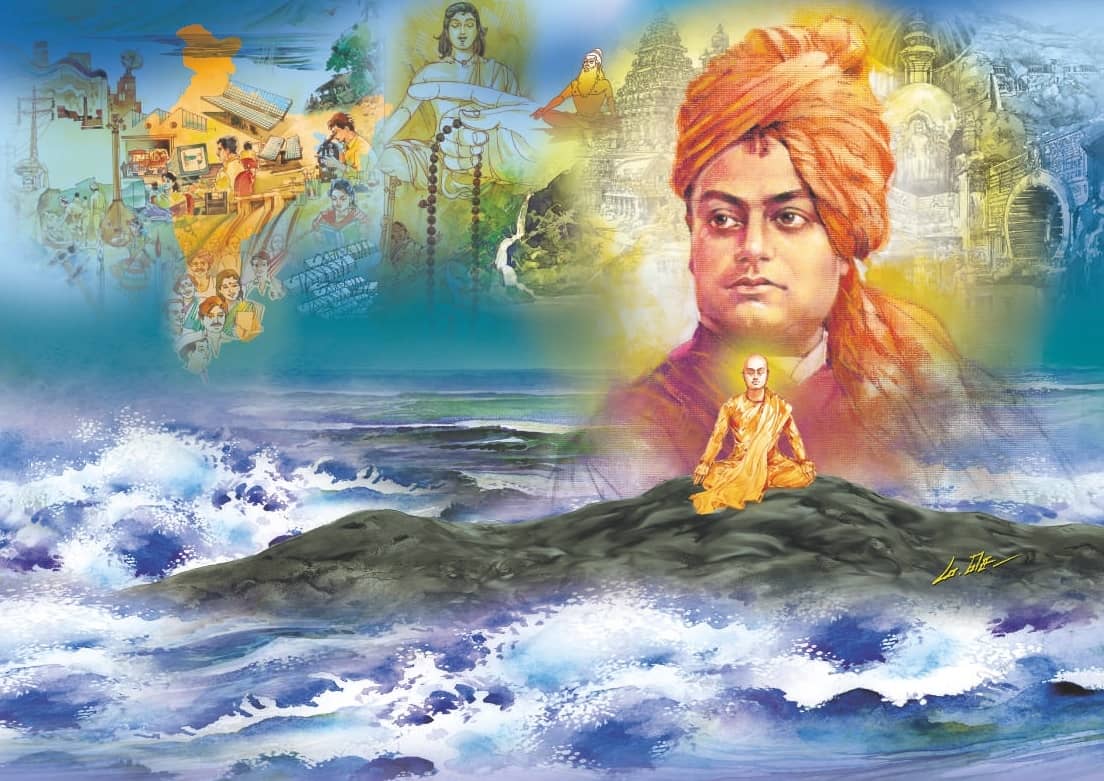 The article presents Swami Vivekananda’s meditation at Kanyakumari as his ‘moment of enlightenment’ when his thoughts on the reasons for the downfall of India and the course of its revival took a definite shape.
Asim Chaudhuri

It is true that the World’s Parliament of Religions was a big event in Swamiji’s life that acted as the structural catapult launching him into prominence as Swami Vivekananda—the World Teacher. But that was his ‘external’ nature, an outward manifestation of his inner spiritual power—what people saw and heard. His ‘Buddha moment of enlightenment,’ or just his ‘Buddha moment,’ occurred in two places at Kanyakumari—first in Mother Kumari’s temple and then on what is now known as the Vivekananda Rock. Treating these events as a two-part continuum, this will go down as the most defining moment in his monastic life that elevated him from the level of self-actualization to self-transcendence. It was a totally ‘internal’ phenomenon, an innermost experience. This article attempts to describe what led to that moment, how Swamiji experienced it, and what happened in the aftermath. We know something about what led to it and what happened in the aftermath, but very little about its nature, because Swamiji was rather reticent about what he had experienced over those three days at Kanyakumari; for that, we have to rely on his biographers and our capacity for inductive or deductive imagination.

From the Himalayas to Kanyakumari

It all started in July of 1890 when Swamiji left the Baranagore Math with Swami Akhandananda and started for the Himalayas. His final words before he left was: ‘I shall not return until I acquire such realization that my very touch will transform a man.’1 He returned in January 1897, six and a half years later, to the Alambazar Math (to which the brother disciples had shifted in 1892) after fulfilling his promise; no matter how one looks at it, he transformed generations to come.

He started at the foot of the Himalayas in August 1890, and after going through a myriad of towns, villages, and cities, performing austerities at every chance he got, observing the conditions of people from all walks of life throughout his travels, meeting some with whom he had developed long acquaintances, he finally ended up at Kanyakumari on December 24, 1892.

During those six and a half years that he was outside Calcutta, or even later, he might have had several transcendent moments of deep spiritual experience. But his “Buddha moment” at Kanyakumari tops them all.

What happened at Kanyakumari?

After reaching Kanyakumari, Swamiji went straight to the ‘Mother’s temple’ and fell prostrate in ecstasy before Her image. How long he remained in that position, or how long he sat there in worship, is not known. The Life narrated what happened next as follows:

‘After worshipping the Mother in the temple, it was to this holy rock that the Swami wanted to go for meditation. But how could he go? He had not a single pice for the boatman.

‘Without more ado he plunged into those shark-infested waters and swam across. About him the ocean tossed, but in his mind was greater turbulence.’2

In the first edition of the Life, published in the mid-1910s, the biographers were uncertain about the location of the rock with respect to the temple, and didn’t realize that they were independent of each other. As a result of a visit to Kanyakumari by Swami Virajananda later, that was all corrected and various eye-witness accounts over the years were added to the narrative to make it complete. The above excerpt is from the most recent edition of the Life, published in 1989.

It is natural for the biographers to assume that Swamiji plunged into the ocean because he could not afford a boat ride, but there could have been a more compelling reason why he took to swimming that stretch of water, which was only about 400 meters (two furlongs) wide and could have been even less during a low tide depending on the bottom topography. He was probably in a liminal state, on the verge of transitioning from the real to the ephemeral, looking for answers through meditation in solitude on the rock. He meant to honor that spiritual journey to the rock, ‘sanctified by the blessed feet of the Divine Mother,’ through the hard slog of self-denial to refresh his soul, sharks or no sharks. (The Batuk Bhairavas would have protected him from any kind of danger.*) He probably felt like the resolute pilgrims who think that the arduous journey on foot to ‘Pilgrimage Hinglaj’ is an integral part of their spiritual fulfilment, as important as reaching the destination and offering prayers. The journey has its own unique reward, as it is considered a penance to purify oneself.

The only time Swamiji referred to his visit to Kanyakumari, which is on record, was in a Bengali letter to Swami Ramakrishnananda on March 19, 1894, a little over a year later. That ought to tell us something about his restraint in referring to it. The letter was his first to the brother disciples after leaving Calcutta in July 1890. One noticeable fact is that Swamiji never mentioned the word ‘swim’ in that letter, but there was a subtle hint in it that he did go to the rock. A part of the letter said: ‘In view of all this, specially of the poverty and ignorance, I had no sleep. At Cape Comorin sitting in Mother Kumari’s temple, sitting on the last bit of Indian rock, I hit upon a plan: We are so many sannyasins wandering about, and teaching the people metaphysics—it is all madness. Did not our Gurudeva use to say, “An empty stomach is no good for religion”? That those poor people are leading the life of brutes is simply due to ignorance. We have for all ages been sucking their blood and trampling them underfoot.’3