What's the point of the cactus? 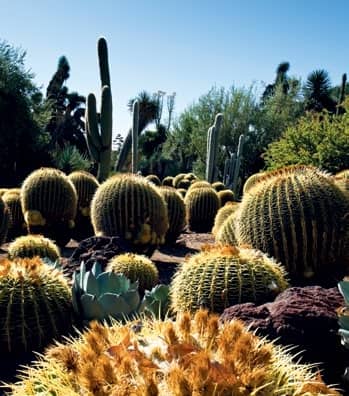 ‘It seemeth a strange herb,’ wrote the Spanish physician Nicolás Monardes in his Joyful News out of the New World (1568) of his first encounter with a cactus. ’One of its thorns pricked me. They are as sharp as needles and did hurt.’

Strange, certainly, and, in their serried ranks at the garden centre, unappealing – bulbous, warty, and bristling, like a legion of warlike goblins. Or so they had always seemed until, last year, I visited the Huntington Desert Garden in southern California.

Henry Huntington founded the Pacific Electric Railway in 1901. Based initially in downtown Los Angeles, it grew within a few years into a mass-transit system of electrically operated streetcars, linking the sprawling metropolis from the north (Pasadena) to the south (Long Beach), west (Beverly Hills) to the east (Rialto). His foresight in buying large tracts of the real estate alongside the routes of his streetcars made him the largest single landowner in California.

He was fantastically rich and, with his estimated fortune of 50 billion dollars, built an art gallery to house his collection of prints and paintings (Dürer, Rembrandt, Goya, and Gainsborough) and a library to display his first editions of Shakespeare, the Gutenberg Bible, Chaucer’s Canterbury Tales and eight copies of Newton’s Principia Mathematica, two annotated by the author.