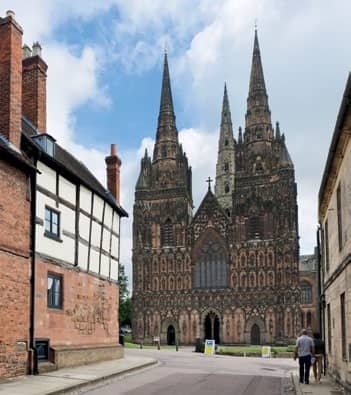 Sometimes, it’s the strangest things that bring you back to places you’ve forgotten. What brought me back to Staffordshire was seeing a statue of Sir Robert Peel in Tamworth, his adopted home town, concealed in a big black box to protect it from protestors. This surreal spectacle reminded me what fun I used to have in Tamworth, and how I’d love to go there again.

I first set foot in Staffordshire 35 years ago, when I scraped a place at Keele University, near Stoke-on-Trent. In the idle years that followed I got to know this enigmatic county fairly well. Two of my student friends got married and bought a house in Tamworth, and I spent many happy weekends there. They left Tamworth 20 years ago and, this year, they got divorced. This news was a shock – it felt as if a chapter of my life had ended.

And then I saw that statue of Sir Robert Peel, boarded up outside Tamworth Town Hall. It may sound daft, but something seemed to be calling me back to Staffordshire again.

Like most oldies, I try to see both sides in any quarrel. I was glad that the statue of Edward Colston was removed, and saddened when Churchill’s statue was defaced, but it seems the targeting of Sir Robert Peel was a case of mistaken identity. It was Peel’s father (also called Robert) who opposed the abolition of slavery, not his son, who created the modern Conservative Party and founded the Metropolitan Police (another sin in statue-topplers’ eyes). Here’s hoping his statue is uncovered as soon as possible.

Meanwhile, there’s lots more to see in Tamworth, and Staffordshire’s other market towns – such as Newcastle-under-Lyme, in the Potteries, and Leek, the gateway to the Peaks.

Staffordshire is one of England’s less fashionable counties. Sandwiched between Stoke and Birmingham, it’s a place people tend to pass through in a hurry on the way to somewhere else. But if you take the trouble to stop off and nose around, you’ll find plenty of surprises. Maligned, neglected Tamworth is a perfect case in point.

RELATED STORIES
Stripping off for a good cause
WOMAN'S OWN
2 mins read
Repton revisited
Derbyshire Life
3 mins read
Peace AT LAST
NEXT
9 mins read
I Want That One...
Triumph World
9 mins read