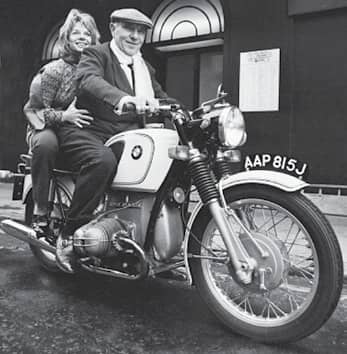 We ride motorcycles for the same reason dogs stick their heads out of car windows: to enjoy the wind on our faces. During a recent warm spell, I noticed many middle-aged and older motorcyclists surfing the balmy Cotswolds breezes.

At a petrol station outside Chipping Norton, half a dozen young bikers – including two women in leathers – sprawled together on the grass verge, enjoying soft drinks and cigarettes while their Japanese ‘crotch rocket’ machines leaned at rest.

Separately, two gents whom I took to be in their 60s or 70s were perched on new-looking Britishbuilt Triumphs nearby. Neither group acknowledged the other.

Movie star George Clooney, 59, now resident in Sonning, Berkshire, is another enthusiast: ‘I enjoy going on motorcycle trips and stopping in small towns and enjoying drinks with the locals.’

Most bikers tend to be young or middle-aged; some will remain in thrall to motorcycles much longer, returning to two wheels in retirement after their mortgages (or wives) have been paid off.

TE Lawrence (Lawrence of Arabia) would likely have continued to ride his 100mph-plus Brough Superior into his dotage if he hadn’t had to swerve to avoid two boys on bicycles in a Dorset lane, killing himself at the age of 46, in 1935.