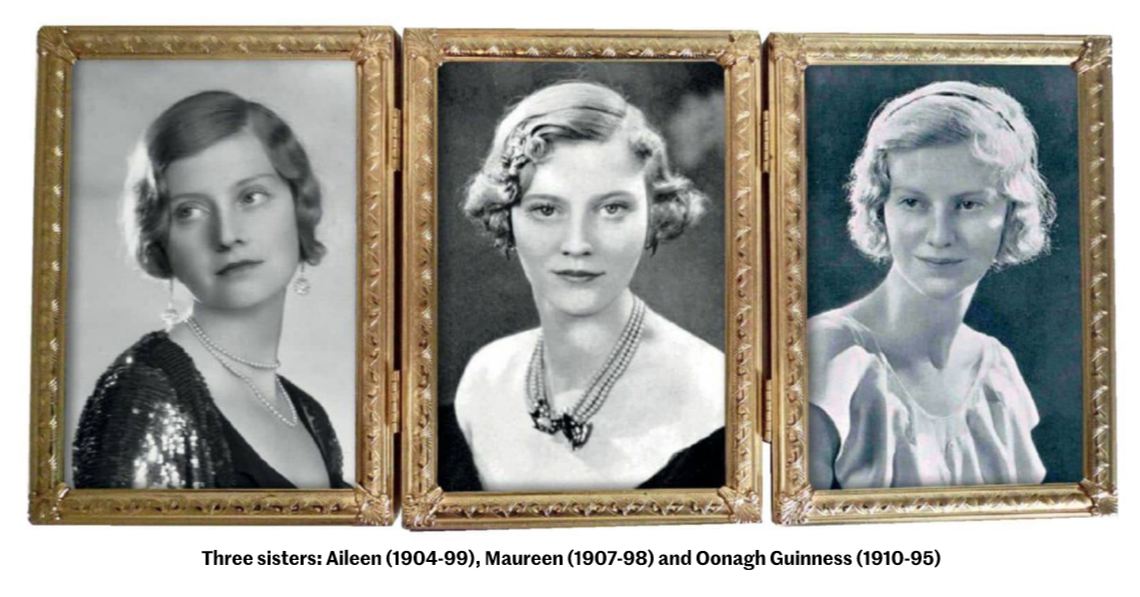 A century ago, three heiresses lit up the Roaring Twenties in Ireland’s loveliest houses with charm and gaiety.

John Huston called them ‘witches – lovely ones to be sure. They are all transparent-skinned, with pale hair and light blue eyes. You can very nearly see through them.’

They were the three Glorious Guinness Girls: sisters with, between them, eight marriages, 13 children, three very grand houses and three very distinct personalities.

Aileen, the eldest, was elegant and social. She moved through a jet-set world of movie stars, society heiresses and international playboys, including the Aga Khan and Ursula Andress.

Maureen, the middle child (with all the look-at-me desire to shock that being the middle child can animate), made a virtue of her connections, conducting a lifelong obsession with royalty and the Queen Mother in particular.

Oonagh, the youngest and sweetest (and, she believed, her father’s favourite), was almost a bohemian. A friend to artists and poets, she kept open house at Luggala, just outside Dublin. There she entertained Brendan Behan, Sean O’Casey, Claud Cockburn and, later, when her son Tara grew up, Mick Jagger, Anita Pallenberg and John Paul Getty II.

They were the daughters of Arthur Ernest Guinness, second son of the first Earl of Iveagh (these were the brewing Guinnesses, rather than the banking Guinnesses or clerical Guinnesses).

His younger brother, Walter, later Lord Moyne, was Minister of State in the Middle East, while the elder, Rupert, once shared a governess with Winston Churchill – and lived to bear the scars.

The boys were once bought a toy harness and coachman’s whip. ‘You be the horse,’ the young Churchill said. When Rupert didn’t want to, Churchill whipped him across the face, catching his eye and scarring him for life.

Aileen was born in 1904, Maureen in 1907 and Oonagh in 1910. They spent their childhoods mostly in Ireland, at a house called Glenmaroon which was actually two houses. There was a home cinema, an indoor swimming pool, even a coal scuttle that played a tune.