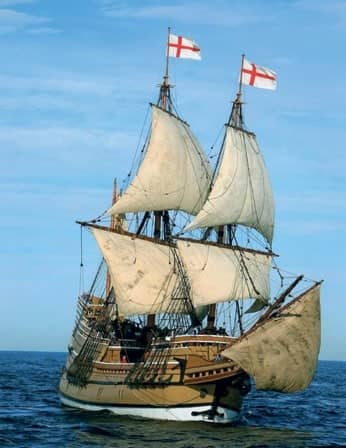 In 1957, a bold British journalist built a replica of the Mayflower and sailed it across the Atlantic.

Randal Charlton
Four hundred years ago, on 11th November 1620, the Mayflower, the most significant ship in American history, dropped anchor near the tip of Cape Cod and what is now the town of Plymouth, Massachusetts.

On board were 30 crew and the 102 Pilgrims who established Plymouth Colony, a crucial staging post in the foundation of modern America.

The original Mayflower sailed back to England in April 1621, was sold and, it’s thought, broken up.

Along time later, in 1957, my father, Warwick Charlton (1918-2002), gave a replica of the ship, the Mayflower II, to the American people. He wanted to recognise the contribution of the people of the United States to freedom and democracy in the first half of the 20th century. He’d built the ship in Brixham, Devon.

My father’s journey across the Atlantic in the Mayflower II took 53 days and was followed by media around the world. On arrival at Cape Cod in 1957, Mayflower II was greeted by Vice-President Nixon and vast crowds of a size that would be the envy of the current American president.

My father was a man of very modest means when he put his life as a journalist on hold to give the American people a piece of their history.

At first, he gave no thought to completing the project himself. He had no financial resources. He lived in rented accommodation. He had no car, savings or bank account.