Getting Dressed: Puttin' on the glitz, Dynasty style 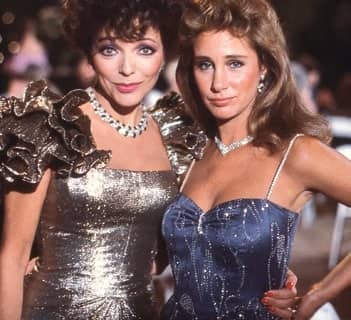 In the autumn of 1984, 22 million people in America were glued to their TV sets every week watching Pamela Bellwood.

That was the year Dynasty (1981-89) was the most popular series on television in the US, garnering huge audiences and many awards. Bellwood, then 33, played Claudia, an emotionally fragile young woman who, she says, ‘slept with, or married, every other main male character in the life of the series’.

Bellwood, 69, did not have the leading role (that was Joan Collins as Alexis) but her character had a huge following.

Dynasty parties were all the rage, and a friend at one of these rang Bellwood to ask if she would speak to another guest, who was dressed as Claudia: ‘She’d told my friend she would die if she couldn’t speak to the “real” Claudia. He handed the phone over and I said, “Hello,” and the woman fainted.’

Bellwood says Hollywood was the last thing her parents wanted for her. Her father was a businessman in New York and her mother had been an executive at Macy’s. ‘Hollywood was an anathema to them.’

As a child, she dreamed of being a writer and a poet. ‘But in drama class at school, I realised that I could make an audience follow where I was looking by a slight change of expression, and that gave me confidence to explore acting.’