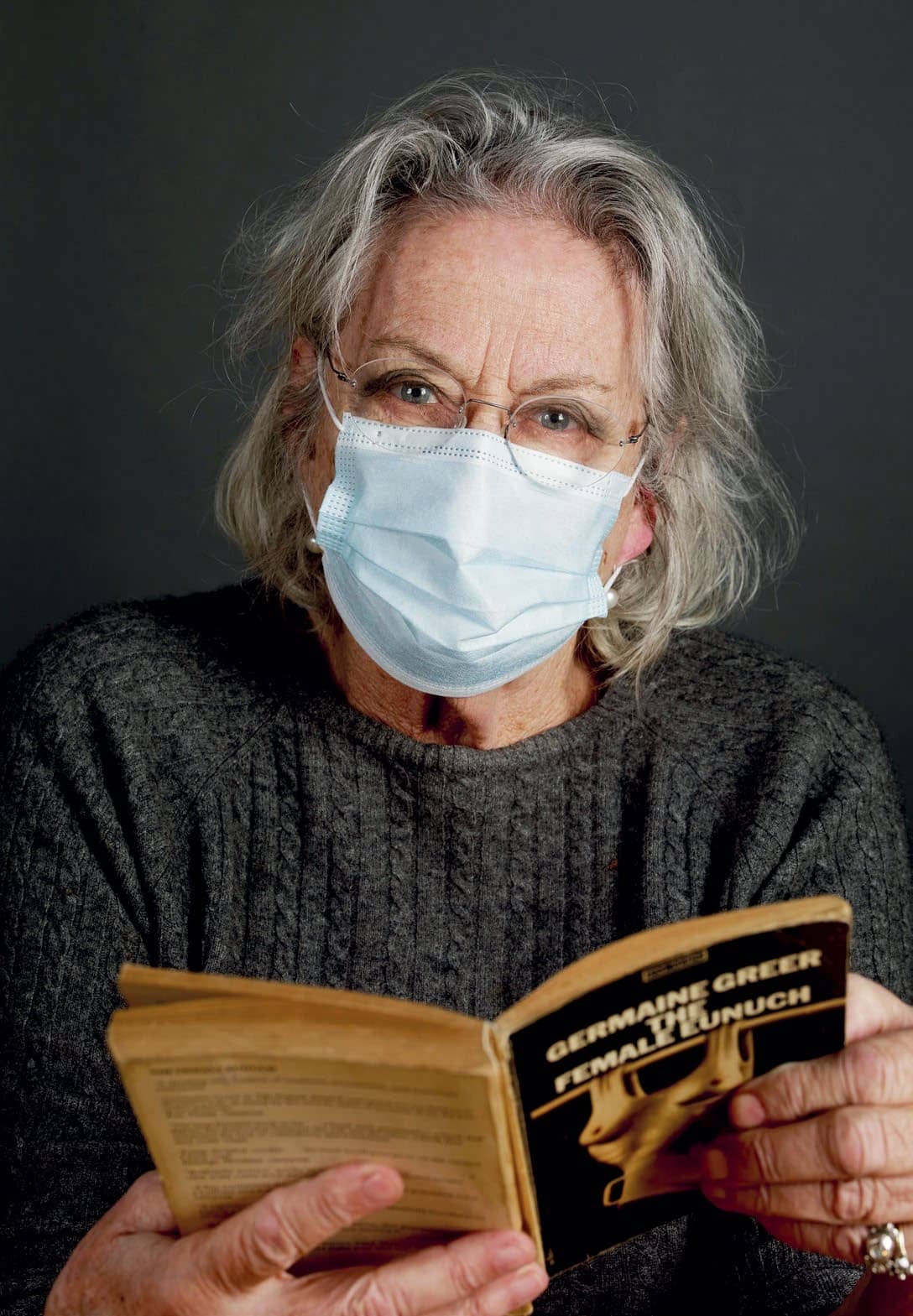 Fifty years after The Female Eunuch, the writer tells Valerie Grove about unsexy Clive James, her transgender war and scalping herself

Germaine Greer has been an Oldie heroine since The Oldie began. Richard Ingrams, who used to weep on her shoulder when his first marriage was falling apart, founded his new magazine in February 1992 and gave Germaine a column.

It was called ‘From Stump Cross Roundabout’ – the Essex fastness she inhabited: a pair of millhouses in dull countryside with ‘not a single handsome room’. But she waxed rapturous about the vast East Anglian skies, which she’d been ‘too busy projecting myself’ to notice in her Cambridge days. ‘I am so full of joy,’ she wrote in the first Oldie, ‘I hardly dare move in case I spill some.’

I arrive under a pall of cloud just as she is wrestling with a new problem over the sale of The Mills. The three-year saga of this sale — its price cut to less than £1 million — could ‘suck the marrow out of the bones’, as she put it. The buyers wanted her out in a fortnight, and she hadn’t yet found a bungalow to rent. She might end up sleeping on a park bench. ‘Typical Greer problem,’ she said.

I recall (she doesn’t) where we first met. It was in the summer of love, 4th June 1967, at the Granta party at Cambridge: Michael Frayn, Clive James, Ted Hughes and so on. There stood La Greer, PhD, Shakespearean scholar and star of Footlights. Long, lean and drop-dead gorgeous in pre-Raphaelite curls and a mini-dress seemingly made of chain mail, she held forth, surrounded by awestruck men.

At 81, she has aged carelessly and without artifice. As she said in The Change (1991), the menopause liberated her from vanity. She scorns women who squander fortunes ‘fashioning themselves into ghastly simulacra of youthful bodies’. Accident-prone, she described in gruesome detail how she fell downstairs, scalping herself on her furniture, just as she was due to fly off on a speaking tour of Australia.

She uses a stick to walk from her workshop (its filing cabinets empty, since she sold her archive to Melbourne University for £1.8 million), past doves and geese, up the path to the creeper covered house which already wears an unlived-in air. Handsome pieces of furniture – some Biedermeier; quite valuable – have been promised to friends.

Her assistant Lorraine offered coffee, which she would fetch from the café in the village.

‘Don’t you have a kitchen here anymore?’ I asked.

‘I haven’t bought coffee for about ten years,’ said Germaine. ‘Can’t be arsed.’

Really? I associate her with high standards of hospitality as of horticulture. She used to bestride her meticulously organised orchards like Vita Sackville-West. She was ‘Rose Blight’, Private Eye’s gardening columnist, a walking Stearn’s dictionary of plant names from Alchemilla to Zygopetalum. ‘What I’d like,’ she said now, ‘is a bottle of prosecco and a straw.’

What luck! With uncanny prescience, I had a bottle of chilled prosecco in my bag, which The Oldie’s photographer later served with a flourish, in flutes.

I had also brought my copy of The Female Eunuch, signed ‘Carry on!’ in Greer’s bold hand at the launch party 50 years ago – in October 1970 – organised by her fellow Melbourne convent girl Carmen Callil. Tucked inside the book were the notes for my review for the Evening Standard. I was 24 and a child bride. ‘Wives downtrodden, lonely. Men’s loathing, women’s guilt. Terms of contempt: skirt, tail,’ I wrote. ‘Women must value themselves more highly.’ Alongside these jottings is a list of things to do that weekend along with my review. ‘Vacuum,’ it says. ‘Clean fridge. Kitchen floor.’