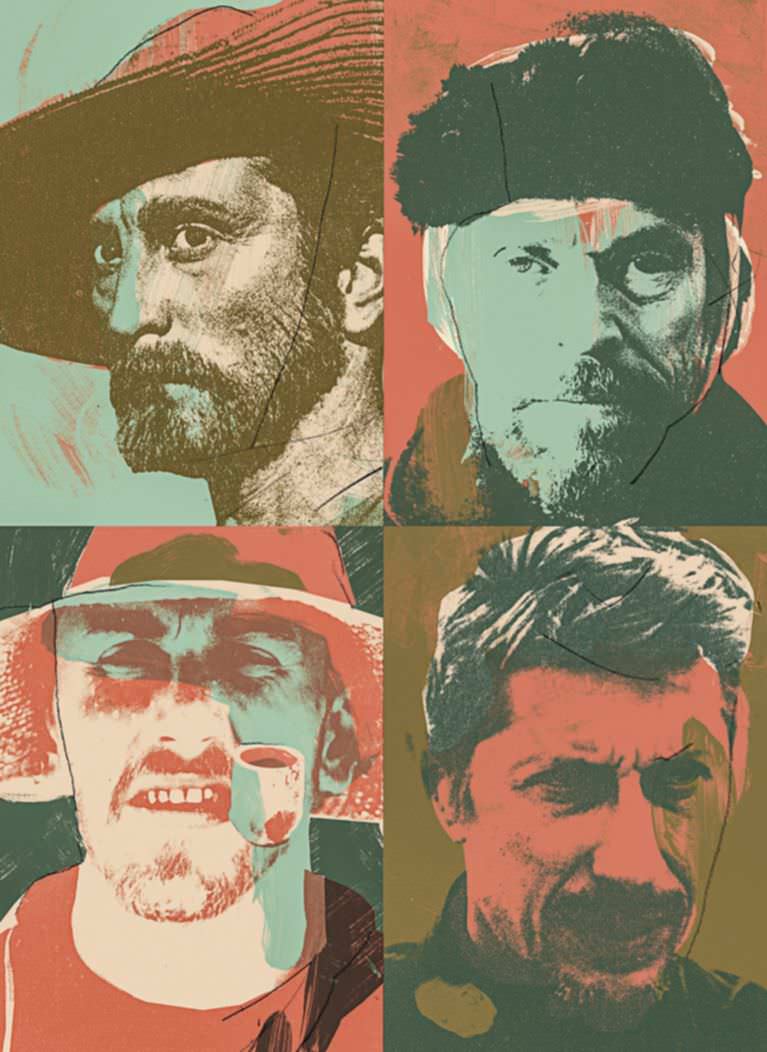 A man walks into a field. The day is young. He starts to run, then stops and lies down on his back. He gathers handfuls of soil and sprinkles it over his face. Earth falls onto his eyes. Some goes into his mouth. Anyone passing by would think he was trying to bury himself. But he sits up, wipes his face, laughs, licks his dirty lips, and gets to work.

The scene comes from “At Eternity’s Gate,” a new film directed by Julian Schnabel, and the man is Vincent van Gogh, played by Willem Dafoe. That toothy grin is unmistakable, as is the deep, confiding tone with which Dafoe recites the words of van Gogh, in voiceover. The actor is sixty-three, whereas the painter was thirty-seven when he died—of a gunshot wound, in 1890— but you barely notice the gap between them. Dafoe’s intensity is undimmed (he seems not to have aged since his jungly exertions in “Platoon,” more than thirty years ago), and, as for van Gogh, he was worn and torn by the strain of being alive. “I have a portrait of myself, all ash-colored,” he wrote to Paul Gauguin, in 1888, and the ash figure he refers to, with sucked-in cheeks and hair cropped close to the skull, resembles a prisoner with no hope of parole. The backdrop is malachite green, quivering and sick. The question, as we confront such an image, is not how old van Gogh is but how much time he has left—how much longer he can survive on what he calls “the élan of my bony carcass.”

Schnabel’s movie feeds on that élan. A painter himself, he wants us to observe things through a painter’s unblinking eyes. Hence the opening shot, jolting and handheld, in which we share van Gogh’s point of view as he approaches a shepherdess and her flock on a country track and asks if he can sketch her. The effect is unnerving—a kind of neurotic pastoral—and, like the shepherdess, we’re not sure how to react. A while later, when the artist strides through ripening crops, we find ourselves gazing directly downward, in fascination, at the tread of his feet, as if ordinary motion were a miracle. There’s not much more that Schnabel could have done, short of filming in 3-D and arming each member of the audience with a virtual-reality headset, to put us in his hero’s shoes.

But why van Gogh? Why should his appetite for experience cry out for dramatization, when other artists go begging? One can imagine a Giacometti film, in which the cast underwent a compulsory stretch on the rack before production began; or, conversely, a Rubens bio-pic, requiring every actress to start the day with a heap of waffles and a blizzard of whipped cream. But van Gogh is the one.

He has been anointed—and travestied—as the ideal of the modern artist, even by those for whom art, modern or otherwise, is at best a diversion and at worst a scam. Everybody knows about the cutting of his ear, or cracks cruel jokes about it. His name is as famous as that of Picasso, but Picasso has been mythologized as a monster of control, whereas van Gogh, it is agreed, lay at the mercy of the uncontrollable. In his later years, he suffered acute seizures, which have since been ascribed to a number of causes, including epilepsy, syphilis, and schizophrenia. The fact of that suffering, however, is not in doubt, and posterity has both pitied him for his exhausting mental fight and venerated the result; without the fighting, we believe, we would not have the art. The ancient notion of creativity as a species of divine madness is reborn, above all, in van Gogh.

Or, rather, in Vincent, the lone word with which he signed his paintings. Other artists, some of the loftiest rank, are known by their first names: Giotto, Leonardo, Michelangelo. None, however, seem as companionable as “Vincent,” and you won’t find the word “Giotto,” bald and bold, looped in black paint at the foot of a fresco. It may be that van Gogh, whose relations with his family were fraught, chose his signature as a rebuff, loath to present himself as a van Gogh. Whatever the case, his decision has warmed and eased posterity’s embrace.

Another advantage of Vincent is that it gets millions of his admirers off the hook. They are spared the herculean horror of trying to say his last name, and the pitfalls of cultural snobbery that surround it. In “Manhattan” (1979), two couples amble down a street, discussing the overrated. Who deserves to be brought low— Mahler, Mailer, Lenny Bruce? “How about Vincent van Gogh?” Mary (Diane Keaton) asks, in playful provocation. She pronounces the name to rhyme with a Scottish loch, and Isaac (Woody Allen), who’s only just met her, flinches in disgust, mouthing and remouthing her words as if he were chewing stale cake. To him, it proves she’s a phony who tries too hard. The correct version, for him as for most other Americans, is “van Go,” and the joke is that none of them are right. Nor are the English, who plump for a cozy “van Goff.” Let’s be honest: we will never be sufficiently glottal. We should leave van Gogh to the Dutch, from whose lips “Gogh” emerges as a two-part catarrhal feast. Thank heaven for Vincent.

What this pleasing confusion shows is how zealously van Gogh has been appropriated. An industry, a revenue stream, a case history, a cautionary tale, and a cult: he is all these, and there are moments, amid the clamor, when the paintings and the drawings struggle to be heard. Arles, in southern France, where he stayed from February, 1888, until May, 1889, and where he shared a house with Gauguin for two tumultuous months, is now home to the Vincent van Gogh foundation, and feels like a shrine to his memory. You might not guess, from such fond affimation, that a petition was raised by the townsfolk in March, 1889, complaining about the painter’s behavior and pleading that he be interned.

It is only fitting that filmmakers of distinction should, over the past seventy years, have taken up the cause of van Gogh. A small crowd of movies has ensued. In 1948, Alain Resnais made a documentary, “Van Gogh,” that won the Academy Award for Best Short Subject. Vincente Minnelli’s “Lust for Life” was released in 1956. After a long hiatus came Robert Altman’s “Vincent & Theo” (1990) and “Van Gogh” (1991), directed by Maurice Pialat, who, like Schnabel, had started out as a painter. Last year, we had “Loving Vincent,” an animated film, and now we have “At Eternity’s Gate.” So far, there’s no sign of a van Gogh zombie flick, and Vincent has yet to join the Guardians of the Galaxy. Give him time.