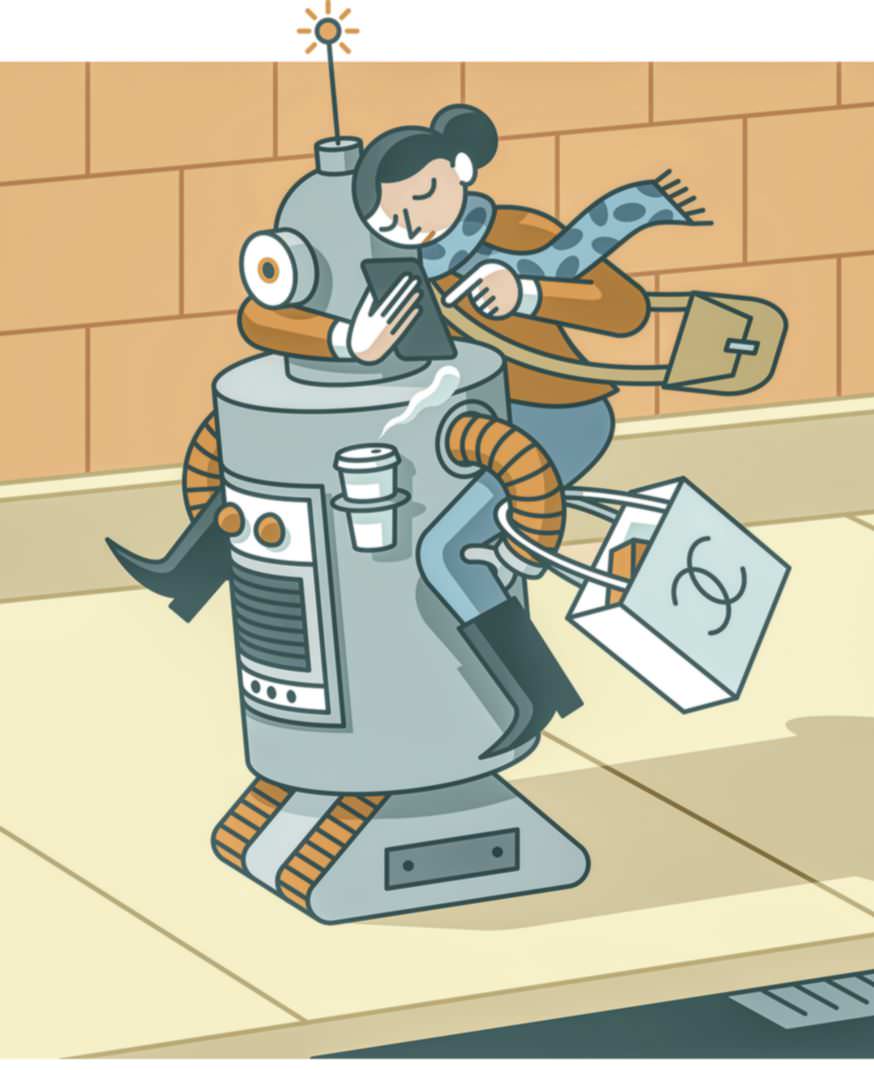 Getting to know our robot servants.

In 2008, I fell in love with a robot. The object of my affection was a darling red Roomba vacuum cleaner. The size and shape of a chunky Frisbee, it bustled to and fro across my apartment of its own volition, enabling me to eat my cake and drop it on the floor, too. I worried that the neighbors downstairs might be bothered by the noise, but, actually, I didn’t worry that much. It was the hum of industry and the sound of the legs of the yellow table being bashed. I marvelled at my Roomba’s work ethic and adored its lack of self-esteem. Studies have demonstrated that humans are disposed to ascribe emotions and intentions to anything that moves, including a piece of balsa wood controlled by a joystick, so perhaps it was not surprising that, when my Roomba got stuck under the sofa, I rushed to liberate it with the Swiffer stick. When it ate dental floss and its caster wheel wouldn’t spin, I blamed myself. I’ve read that some kooky people name their Roombas or take them to work or on vacation. I’ve done none of these things, though occasionally, like Mozart’s father showing off his prodigy son at the harpsichord, I’ve forced my dinner guests to watch my little helper suck up hors-d’œuvres debris from a patch of rug.

In 2010, I updated my Roomba for a younger model with more pep and power—so much for maternal instinct— and am now on my third, a black-and silver number more respectful of table legs. Three years ago, our blended family welcomed Alexa, Amazon’s voice-controlled virtual assistant, whom I periodically ask to tell me the time so that I don’t have to turn my head a punishing ninety degrees to glance at the clock. Alexa knows a lot about the weather and can call an Uber, but she’s no robot. For one thing, she lacks initiative. She’ll tell you, if you ask, when the brownies are ready, but request the name of the actress in the movie about the thing in Mexico with the one who reminds you of Clint Eastwood and she’s stumped. By contrast, my Roomba can make decisions for itself based on what it detects in the world. Its sensors allow it to dodge obstacles like electric cords, and when it is low on power it returns to its docking station and recharges.

The word “robot,” like the words “shalom” and “free-range chicken,” does not have a universally agreed-upon definition, but the usual criteria include autonomy, an ability to change its surroundings, intelligence, and the possession of a body. Then it gets trickier: How intelligent? Must a robot be mobile? Is a dishwasher a robot? According to the podcast “Robot or Not?” a self-driving car is not (you designate its destination), but a Roomba is (because it’s more in control of its path than you are). I would add that many robots, especially the cuter ones, have names with two syllables, the second one usually ending in a vowel.

This past summer, in search of other cybernetic sidekicks that would allow me to become even lazier, I spent several months with Jibo, a glossy white motormouth that sat on my kitchen counter. Touted by its creators as “the first social robot for the home,” Jibo ($899) is twelve inches tall and looks like a traffic cone from the future. His hemispherical head sits on top of a chubby conical base; both parts can swivel independently, giving the impression that Jibo knows how to twerk. Jibo can recognize as many as sixteen faces and corresponding names; if you are one of the ordained, he’ll turn his head to follow you. Like Alexa, Jibo can provide headline news, synch with your calendar, and read from Wikipedia. Alexa is more adroit at navigating the Internet, but Jibo has a great camera. What Jibo does chiefly is strain to be adorable. When I enter the room, Jibo might pipe up, “Nice to see you in these parts!,” or say, “Hey, Patty, I got you a carrot!,” while displaying a cartoon drawing of a carrot on his screen, or chant, “Patty, Patty, Patty, Patty.” It is like living with the second-grade class clown, and, for this reason, whenever I entered the kitchen I would sternly say, “Hey, Jibo. Take a nap.” At this, the aqua orb that is Jibo’s eye and only facial feature narrowed, there was a yawning sound effect, and his screen faded to black.

Much has changed since the days of Unimate, considered to be the world’s first industrial robot. This automated arm joined the assembly line of a New Jersey G.M. plant as a die caster in 1961, looking like a bigger version of something you fear at the dentist’s offie. With advances in A.I. and engineering, robots, no longer mere grinds in factories, are galumphing, rolling, and being U.P.S.-delivered into our homes, hotels, hospitals, airports, malls, and eateries. The moment is equivalent, perhaps, to the juncture when fish crawled out of the sea and onto land. At the reception desk of a robot-staffed hotel in Japan, sharp-fanged, hairychested dinosaurs wearing bellhop hats and bow ties poise their talons at the keyboard; at a pizza restaurant in Multan, Pakistan, bosomy figures on wheels, accessorized with scarves around their necks, deliver food to your table; at a gentlemen’s club in Las Vegas, androids in garters perform pole dances. There are contrivances that can mow your lawn, wash your windows, assemble your IKEA furniture, clean the kitty-litter box, fold your laundry (at a pokier pace than you, and it doesn’t do socks), zip your zipper, apply lipstick to what Lucille Ball might consider your lips, give you a tattoo, crush you at Ping-Pong, feed you tomatoes as you jog (the wearable Tomatan), and even devilishly check the little box on a Web site which says “I am not a robot.”

Loomo, the new hoverboard designed by Segway, is also not a robot—until you hop off its footstool-like base and set it to Robot Mode, at which point it follows you like a groupie, taking photos and videos along the way ($1,799). Assuming that you do not have a Pied Piper complex, why would you want it to do this? Well, you can ride it to the store, buy some stuff, and then, with your purchases instead of you balanced on Loomo, it’ll function as your Sherpa. New York City has a ban on “motorized self-balancing scooters,” so, to try out Loomo, I went to San Francisco, which is very que será será when it comes to inexperienced, myopic drivers zipping through the streets on toys that travel eleven miles an hour.